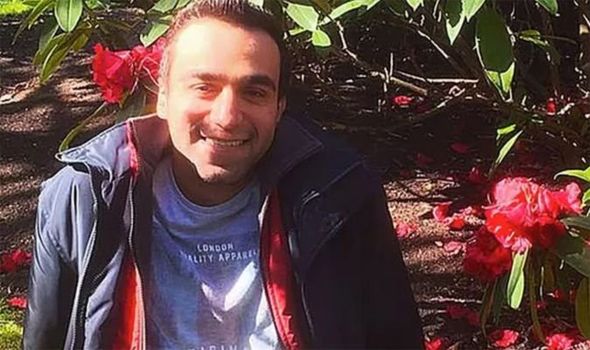 The Home Secretary criticised the “merry-go-round” of the appeals process which terrorist Emad Al Swealmeen, 32, exploited. It is believed that Al Swealmeen, above, was planning yet another challenge to his rejected asylum bid when he blew up a cab outside a Liverpool hospital just before a nearby Remembrance Day church service.

He supposedly had converted to Christianity and had changed his name to Enzo Almeni in an effort to improve his chance of winning the right to stay in Britain.

Ms Patel said the case showed how “dysfunctional and how broken the system” is. She said she was “unapologetic” in vowing to restrict claimants to just one appeal.

The Home Secretary pledged that her reforms will end abuses of the process:

“It’s been exploited. [This case] is just a complete reflection of how dysfunctional and how broken the system has been in the past and the type of changes that I want to bring forward”.

She claimed that Al Swealmeen was typical of migrants who take unfair advantage of asylum procedures.

Security Minister Damian Hinds said last night that police were discovering “more by the hour” about the blast in the car park at Liverpool Women’s Hospital on Sunday which killed Al Swealmeen and wounded hero cabbie David Perry who had left him in the taxi as the bomb went off.

Sources said the improvised explosive device Al Swealmeen was carrying was likely to have been built using triacetone triperoxide (TATP) – the same substance used by a suicide bomber to kill 22 people at Manchester Arena four years ago.

TATP includes hydrogen peroxide, which is readily available in shops.

It is thought that some UK asylum seekers from nations such as Iraq and Iran adopt Christianity to avoid being sent back home, claiming they will be persecuted there for their new faith.

Another failed asylum seeker who said they had become a Christian was Khairi Saadallah, who stabbed three men to death in Reading last year. Saadallah, who had left Tripoli in 2012 after fighting in the civil war in Libya, was twice refused asylum but was not deported back there.

Al Swealmeen arrived in the UK in 2014, saying he had a Syrian father and Iraqi mother. His claim was rejected when Home Office officials concluded he was Jordanian.

Alp Mehmet, the chairman of the Migration Watch think-tank, said his case highlights the “dysfunctional depths” to which the UK’s “shattered asylum system has sunk”.

The total of failed asylum seekers awaiting removal is around 40,000, according to the Home Office. Around 47,000 failed claimants and foreign criminals were deported in 2013 but that fell to a low of 8,000 last year.

Data shows 6,000 people were awaiting a decision on their asylum appeal, with 57,000 seeking an initial verdict. Almost 30,000 had been waiting longer than a year.

Three in four applicants who are refused asylum initially, go on to launch an appeal – one in three of these is successful.

Al Swealmeen was born in Iraq and brought up in Syria.

He had a history of mental health problems and was sectioned for brandishing a blade near Liverpool city centre, according to friends.

Malcolm Hitchcott, who with his wife Elizabeth took him in for almost a year, said asylum staff “were never convinced he was Syrian and he was refused asylum in 2014.

“He had his case rejected because he has been sectioned due to some mental health incident where he was waving a knife at people from an overpass”.

Mr Hitchcott, a former lay minister at Liverpool Cathedral, had expressed fears about asylum seekers pretending to convert to Christianity to bolster their applications.

But he believed Al Swealmeen was genuine, saying he would “talk endlessly and passionately about Jesus”.

In documents relating to another case, he said: “I am aware that there are some asylum seekers who attend church with the sole purpose of advancing their asylum claims.” Liverpool Cathedral workers are said to have helped asylum seekers convert to Christianity to help their applications.

Hundreds of Muslims have been welcomed into the Church of England in recent years after completing a five-week course at the city’s Anglican cathedral.

Mohammad Eghtedarian, the curate of Liverpool Cathedral, was asked in 2016 if some people pretended to convert in order to improve their chance of getting asylum.

He said: “Yes, of course. Plenty of people. I do understand there are a lot of mixed motives. There are many people abusing the system – I’m not ashamed of saying that. But is it the person’s fault or the system’s fault? And who are they deceiving? The Home Office, me as a pastor, or God?”

The Rev Pete Wilcox, a former Dean of Liverpool, said at the time: “I can’t think of a single example of somebody who already had British citizenship converting here with us from Islam to Christianity.”

Sam Asworth-Hayes, director of studies at the Henry Jackson Society think-tank, said: “We know that people are willing to lie to win asylum, up to and including faking religious conversions. This is incentivised by the asylum system, which does not do enough to root out fakes. The Home Office and security services should investigate the Liverpool Cathedral convert cluster.”

The charity that helped Al Swealmeen with his bid for asylum said he asked for support “at various points from 2014”.

Asylum Link Merseyside’s centre manager Ewan Roberts said: “We kind of lost sight of him around 2017.” He said Al Swealmeen wanted “things people normally ask for in the asylum system” such as clothing and help to find a solicitor.

Mr Roberts told Sky News the bombing was “absolutely shocking and a lot of us are still trying to understand exactly what has gone on. To have something like that happen in your city…is just awful.

“It leaves you feeling empty. It has caused anger in some places, it has caused resentment in places and until we fully understand why this has happened I think we will all just be in limbo.”

Al Swealmeen had been living in a hostel for asylum seekers in Sutcliffe Street, in the Kensington area of Liverpool. He then rented a property in Rutland Avenue where he is believed to have constructed Sunday’s bomb.

Mr Jayaweera, 29, who lived there for almost three years, said: “It was filthy and very noisy and horrible. There were a lot of asylum seekers like me coming and going.

“It was a struggle to live there but I didn’t have any other choice. It’s been used to house asylum seekers for almost ten years.”

Far fewer decisions, some 14,000, were made on asylum applications in 2020 than usual, as a result of issues caused by the pandemic.

The Home Office has lost control of Britain’s borders.

While the Border Force was busy sending out boats to escort migrants into port and thousands were arriving on our shores, a failed asylum seeker who had been allowed to stay since 2014 was preparing to blow himself up outside Liverpool Women’s Hospital.

We escaped a tragedy on Sunday by the narrowest possible margin.

Why was Emad Al Swealmeen still here to launch his attack? For all we hear of a hostile environment, the UK is welcoming to those who cheat our immigration system, or who want to do us harm.

Last year, the Henry Jackson Society identified 45 foreign Islamist terror offenders who had been allowed to stay after serving their jail sentences.

Why do we insist on putting their wellbeing ahead of everyone else?

It seems at times that the only thing the Government thinks should be harder than bringing in a foreign spouse is kicking out a would-be jihadi.

Officials are slowly giving up on immigration enforcement full stop.

Deportations have plummeted over the last decade, and nearly three-quarters of those detained following immigration offences raise legal challenges, asylum claims or other objections.

We’ve built a system that’s brilliant for lawyers, who get to rack up taxpayer-funded hours, but one that is failing to protect the British people.

If you don’t enforce your borders, you don’t have any.

Last Sunday should have been a wake-up call for the Home Office to start doing its job. We might not be so lucky next time.