HARRISBURG, Pa. — Hours after Democratic presidential nominee Joe Biden took the lead over President Donald Trump in Pennsylvania on Friday morning, all but ensuring his victory in the presidential election, a black SUV with a Confederate flag bumper sticker drove slowly up to the state Capitol building in Harrisburg, a “Make America Great Again” flag billowing from the back.

Nel Ex, a 32-year-old local activist who happened to be outside the Capitol, approached the SUV and let the driver have a piece of his mind.

The SUV drove away.

The interaction set the tone for the day in Harrisburg, where Trump supporters gathered for a rather underwhelming “Stop The Steal” rally in support of the president, part of a nationwide right-wing campaign to falsely portray the results of the election as fraudulent.

As they gathered on the Capitol steps around noon, two bicyclists rode circles on the street below, blaring YG and Nipsey Hussle’s “FDT (Fuck Donald Trump)” from two portable speakers.

It was the second day of the “Stop the Steal” demonstrations in Harrisburg, all organized by far-right operative and influencer Scott Presler, who does not live in Pennsylvania.

Presler, who used to work for the anti-Muslim hate group Act for America, directed the 60 or so die-hard Trump supporters in a series of chants — “Audit the vote!” — and had them pose for group photos.

When I asked Presler for what proof of voter fraud in this years’ election, he repeatedly cited a false story about dead people voting in Michigan. He didn’t provide any other examples.

After I asserted that there’s no evidence of widespread voter fraud — because there isn’t —  Presler accused me of being a “subjective” journalist who was stating an “opinion” instead of facts.

He then asked what evidence I had that there’s no widespread voter fraud in this year’s election — essentially asking that I prove a negative — before telling me that he had been recording our conversation, the audio of which he threatened to publish. He then ended the interview.

A short time later, the crowd stood silently behind Presler as he raised his phone and appeared to conduct a video interview with Jack Posobiec, the neo-Nazi collaborator and prominent MAGA propagandist.

“Awesome, thank you One America News,” Presler said at the end of the interview, referring to the far-right network for which Posobiec works.

The rest of the demonstration maintained a low-energy vibe, with Trump supporters alternating between standing and sitting on the Capitol steps, and only a smattering of bemused journalists to bear witness as they took turns talking over a megaphone.

As a journalist with CNN attempted to interview one demonstrator, a nearby man yelled “CNN sucks” off-camera.

Another man stood on the steps dressed as a NPC — or Non-Playing Character — an internet meme popular among the far right. The meme, an illustration of a gray and featureless man, is meant to represent people who do not think for themselves — unthinking automatons that you might encounter in a video game.

The man, who declined to identify himself, said he dressed in the costume to mock Biden, who he claimed was an NPC with “no original ideas or thoughts” and a “communist piece of shit.”

As I talked to him, the plastic pyramid he wore on his head, inscribed with the words “New World Order” — a phrase common among right-wing conspiracy theorists who fear that a cabal of global elites are secretly orchestrating world events — fell to the ground.

As he struggled to affix the pyramid back atop his head, I asked him if he planned to come to more “Stop The Steal” rallies.

“I’m not really sure,” he replied. “Basically, they’re just not really worth it to me.”

The demonstration began to fizzle out around 3 p.m. 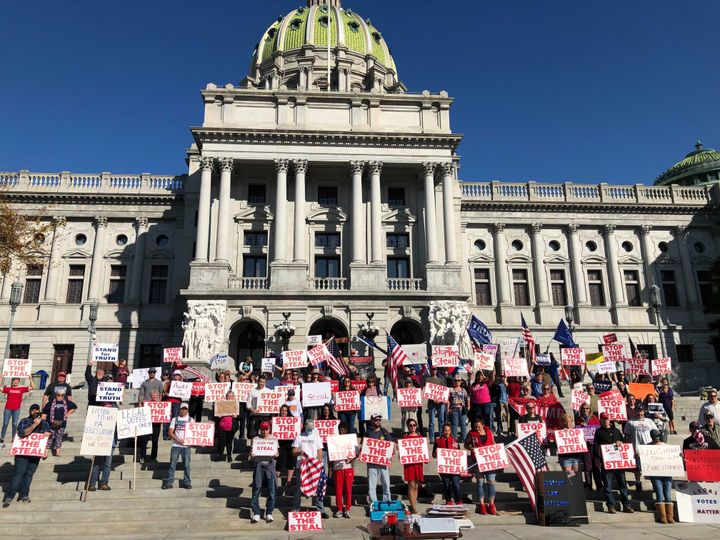 Studies warned of possible violence from Trump supporters if the president lost his reelection bid. This backlash, of course, is still a very real and terrifying possibility. On Thursday night, authorities in Philadelphia arrested two apparent Trump supporters who were allegedly plotting to attack a vote-counting location in the city. On Saturday in Harrisburg, armed right-wing militias are expected to rally on the Capitol steps.

Kadida Kenner, director of the Pennsylvania Budget and Policy Center, a progressive policy research organization, stood across the street from the demonstration as it ended.

Kenner, who has helped organize a series of pro-democracy demonstrations here this week, passed out “Count Every Vote” T-shirts to passersby and looked up at the dwindling MAGA crowd.

“You know, they’re figuring some things out for themselves,” Kenner said of the Trump supporters. “And, you know, just like some other folks had a day of mourning maybe on Nov. 9 of 2016, I think maybe they’re coming to some realizations right now as well.”

“And so, we’ll let them carry on with their First Amendment right,” she said.