President Joe Biden’s nominee for the No. 3 position at the Department of Justice is coming under attack from a right-wing group trying to smear her as anti-law enforcement. But a number of conservatives and law enforcement organizations have enthusiastically endorsed her nomination, and even the nation’s largest police union ― which twice endorsed former President Donald Trump ― praised her as someone they looked forward to working with, saying she could “find common ground even when that seemed impossible.”

Vanita Gupta, the former leader of the Justice Department’s Civil Rights Division during the final years of the Obama administration, is Biden’s nominee for associate attorney general. During the Trump era, Gupta headed up the Leadership Conference on Civil and Human Rights, a coalition of more than 200 civil rights organizations sometimes referred to as the lobby for the civil rights movement. If confirmed, she’d oversee a number of key Justice Department divisions and take a leadership role in what the DOJ describes as a “broad range of civil justice, federal and local law enforcement, and public safety matters.”

Top Justice Department leadership positions tend to be filled by attorneys who built their careers as prosecutors or corporate lawyers. Gupta would be the first Justice Department official since Thurgood Marshall (the former solicitor general and Supreme Court justice) to have built a high-profile career in civil rights and then be named to a top leadership role at DOJ. Gupta ― who has spoken out passionately on issues such as structural racism, police misconduct, mass incarceration, police militarization, voting rights and the “disastrous” war on drugs ― would arguably be one of the most progressive top Justice Department officials in history.

But Gupta also has a long list of allies and supporters in conservative circles and in law enforcement, and has shown a remarkable tact for building bridges across partisan and ideological divides. Her nomination was endorsed or positively received by the Major Cities Chiefs Association, the International Association of Chiefs of Police, the National Organization of Black Law Enforcement Executives, the Hispanic American Police Command Officers Association, the Police Executive Research Forum and, perhaps most surprisingly, the National Fraternal Order of Police (FOP), which twice endorsed Trump.

That’s why some law enforcement leaders were taken aback by an attack ad released Thursday by the Judicial Crisis Network. The ad, even by the low standards of political attack ads, is pretty detached from reality, fluctuating between falsehoods and misleading claims. Titled “Dangerous Appointee,” it features imagines from riots over the summer of 2020 and claims that Gupta supports “defunding the police,” led a group to “reduce punishments on white supremacists” and wants to “let convicts out of jail.”

As Politico reported, the article the Judicial Crisis Network ad cites to support its claim that Gupta favors defunding police “does not actually say that she favors defunding the police.” The claim that Gupta wants to “reduce sentences for white supremacists” comes as a voiceover atop an image of Dylann Roof ― the white supremacist killer whose prosecution Gupta oversaw while at the Justice Department. (The ad cites a letter ― sent by the Leadership Conference on Civil and Human Rights to Biden more than a month after Gupta took leave from the organization because of her nomination ― that calls for Biden to commute all federal death sentences. Such a commutation would “reduce” Roof’s penalty insomuch as it would condemn him to a natural death behind bars rather than death by lethal injection.) And her statement last summer that “COVID-19 is killing people in federal prison who could be released” is one that even former Attorney General William Barr would agree with.

The Judicial Crisis Network’s attempt to portray Gupta as some sort of anti-police radical flies in the face of the experiences of law enforcement organizations that have actually worked with her, even in somewhat adversarial settings.

Patrick Yoes, the national president of the FOP, wrote in a letter to Congress that Gupta ― even in the aftermath of high-profile police shootings and Justice Department investigations in Chicago, Baltimore and Ferguson, Missouri ― was dedicated to dialogue and “always worked with us to find common ground even when that seemed impossible.” While the FOP had and continues to have disagreements, Gupta’s “open and candid approach has created a working relationship that is grounded in mutual respect and understanding,” which they expected would continue if she’s confirmed, he wrote.

Jim Pasco, the FOP’s executive director, told HuffPost on Thursday that there was a natural “dynamic tension” between Gupta and the FOP ― “the regulator and the regulated” ― during her time as the head of the Civil Rights Division. But he said some tension could be “healthy” as long as there’s communication, which Gupta always worked to maintain.

“We’re not necessarily ready to wade into a fight with well-heeled so-called think tanks, but if they pick one and we feel it’s detrimental to our objectives, we’ll do our best to refute their assertions,” Pasco said. “We’ll go to bat for the truth.”

Chuck Wexler executive director of the Police Executive Research Forum, noted it was “rare in Washington” to find a politician who has support from both police management and labor organizations like the FOP.

“The notion that she would argue to defund police is ridiculous. If anything, she would advocate that the police need more resources,” Wexler said. “She is supportive of what the police do. She gets what we do.”

Wexler called Gupta an “incredible listener” who could work toward making policing better and had “enormous credibility” among police organizations.

“When her nomination was announced, many of us were thrilled because she has a track record with law enforcement,” Wexler said.

Asked about the claim that Gupta supported “defunding the police,” Pasco criticized politicians who “preach fiscal responsibility at the expense of people’s lives” and are holding up a federal COVID-19 relief package amid a pandemic that is brutalizing state and local government budgets.

Tucson Police Chief Chris Magnus, one of many supporters of Gupta’s nomination in the policing community, told HuffPost on Thursday that he was “disappointed” by the ads.

“Vanita has been incredibly responsive and fair to those of us in policing. She is one of the smartest and most innovative leaders in the criminal justice arena,” Magnus said. “The attacks against her reflect an agenda driven by those who have never worked with her or who are opposed to any kind of police reform.”

Sheriff Peter J. Koutoujian of Middlesex County, Massachusetts, who heads the Major County Sheriffs of America but was speaking in his personal capacity, told HuffPost in a statement that he was “impressed with Vanita Gupta’s understanding of the issues facing our profession and her eagerness to partner with law enforcement leaders” working on solutions.

“Vanita understands that jails are often the largest mental health providers in their counties, and that’s simply unacceptable,” Koutoujian said. “I look forward to working with her and the Biden administration on innovative ways to construct a healthier and fairer criminal justice system.”

Sarah Guy, an official at the International Association of Chiefs of Police (IACP), told HuffPost on Thursday that the IACP’s “support for Ms. Gupta remains unchanged.” In a letter backing Gupta along with attorney general nominee Merrick Garland and deputy attorney general nominee Lisa Monaco, the IACP said Monaco and Gupta, during a meeting on their approach to working with local and state policing organizations, “clearly demonstrated their deep understanding of, and continued support for, the policing profession.”

The IACP letter said Gupta and Monaco stressed a “flexible approach” and an “array of solutions” to meet the challenges of law enforcement. 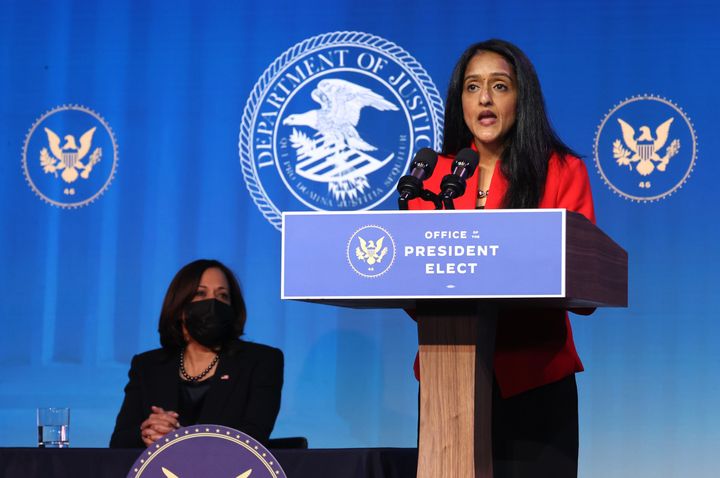 The accolades from law enforcement are unusual for a lawyer like Gupta, who spent her career in civil rights. As a young lawyer fresh out of law school and working for the NAACP Legal Defense and Educational Fund, Gupta dove into an infamous law enforcement corruption case in the tiny Texas town of Tulia, where dozens of mostly Black residents had been swept up in a massive bust based on the lies of a racist former rodeo cowboy working as an informant. (Gupta helped secure a settlement on the victims’ behalf, and former Texas Gov. Rick Perry later pardoned most of the Tulia defendants.)

But throughout her career, she’s spoken about finding a path forward. In recent years, Gupta sought to find common ground between protesters and police officers, pointing out that law enforcement leaders and activists agree that lack of funding for social programs and mental health care can dump difficult issues in the laps of law enforcement, which can lead to bad outcomes and make law enforcement work more difficult.

“When I did investigations for the Justice Department, I would hear police officers say: ‘I didn’t sign up to the police force to be a social worker. I don’t have that training.’ They know they’re stuck handling things because there is a complete lack of investment in other approaches and responses,” Gupta told Emily Bazelon of New York Times Magazine last year.

Her approach has gained support from Republicans as well.

Conservative Grover Norquist, the founder and president of Americans for Tax Reform, wrote a letter in support of Gupta despite their “very different opinions” about many issues.

“I have come to know and respect Ms. Gupta through out common work on criminal justice reform,” Norquist wrote. “I have found her to be strongly qualified, effective, principled, and driven by a desire to seek common purpose and consensus.”

Gupta, Norquist wrote, was “an honest broker” and “someone with an ability not only to understand, but also to appreciate, different perspectives” and seek consensus. “While she and I certainly do not see eye to eye on many issues, she is nonetheless a leader who I trust will bring the same principled approach as the Associate Attorney General of the U.S. Department of Justice.”

Michael Chertoff, a former George W. Bush official, wrote that Gupta had “a deep reverence for the Constitution and the rule of law” and led “diverse cross-partisan coalitions to tackle voting rights, constitutional policing, and criminal justice reform.”

Mark Holden, the former general counsel and senior vice president of Koch Industries, called her “a principled leader who seeks to find common ground and will work with anyone committed to making the system better and more effective.”

Trey Grayson, the former secretary of state in Kentucky and chair of the Republican Association of Secretaries of State, called Gupta “a detailed professional who was both impressive and extraordinarily easy to work with” as well as being “balanced, measured, and fair-minded.”

“I believe members of the Senate ― many of whom I also personally know and deeply respect ― should similarly be pleased with the President’s nomination of Ms. Gupta,” Grayson wrote.

“She has this Republican’s full and enthusiastic support.”