Home » Politics » Progressives Had Some Success In 2020, But They’re Getting Blamed For House Losses

Once again, progressives are having to defend themselves in their own party.

After dominating the national conversation for much of the Democratic presidential primary season and ousting entrenched Democratic incumbents Reps. Lacy Clay in Missouri and Eliot Engel in New York, progressives were hoping to prove to Democratic leadership that their message works politically — not only in blue strongholds, but also in swing districts.

But when Democrats saw losses in close House races across the country, some in the party’s moderate faction erupted in anger against their progressive colleagues.

In a call with the House Democratic caucus Thursday, Rep. Abigail Spanberger (D-Va.), went off. Spanberger unseated a conservative Republican in 2018; this time around, she came dangerously close to losing her race in the suburbs of Richmond, Virginia. She chided progressive colleagues for opening Democrats up to attacks about “socialism” and wanting to “defund the police” — a rallying cry of the Black Lives Matter movement.

“We need to not ever use the word ‘socialist’ or ‘socialism’ ever again,” Spanberger said on the call, audio of which was leaked to the press. “We lost good members because of that.”

The criticisms stem from a deeper fissure in the party that’s been magnified by the cohort of centrist Democrats who won conservative-leaning districts in 2018 to deliver Democrats the House majority. For two years, Democratic leadership has catered to the moderate wing of the party in order to preserve control of the chamber; House Speaker Nancy Pelosi has repeatedly made it clear that she sees the progressive voices in her caucus as a minority in the party.

Republicans seized on figures like Rep. Alexandria Ocasio-Cortez (N.Y.) and Sen. Bernie Sanders (I-Vt.) to paint Democrats as extreme radicals — which is a version of GOP attacks that have been used against liberals, including Pelosi, for decades. 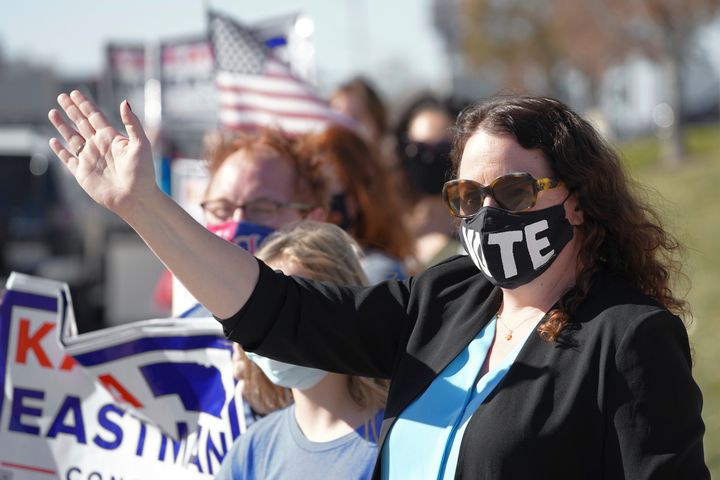 But this election was a mixed bag for progressive candidates. Many of the new faces on the left who were up against incumbent Republicans lost.

Kara Eastman, a fervent supporter of Medicare For All and a Green New Deal who was backed by groups like Justice Democrats and the Sunrise Movement, significantly underperformed Democratic presidential nominee Joe Biden in Nebraska’s 2nd District. Biden won the district and Eastman lost by a bigger margin than her first run for the seat in 2018.

In upstate New York, Dana Balter, who had the support of local Sanders-aligned groups, is also projected to lose, though she has yet to concede, given the state’s slow process of counting mail-in ballots. In Texas, Julie Oliver and Mike Siegel ran on unabashedly leftist agendas in the suburbs, and also came up short.

“This is definitely not the result we hoped for,” said Evan Weber, the political director for Sunrise Movement, the youth-led climate action organization that had a significant presence in this election cycle with its mass digital organizing operations.

The Democratic Party ultimately backed all these candidates, although in some races, like Siegel’s, the support came later.

Progressives’ explanation for what happened with these candidates is largely that it was a bad year for Democrats in House races, and campaigning was limited with the ongoing pandemic. Weber conceded that progressives should reevaluate how candidates are running, because their proposals are clearly popular: Floridians overwhelmingly voted to raise the minimum wage to $15, despite voting out several House Democrats and again giving Trump the state. Several states legalized recreational marijuana. Coloradans voted for a statewide family leave program.

“Our issues are winning; our candidates and campaigns are not,” Weber said.

California’s Prop 22, which gave companies like Uber and Lyft exemptions from labor laws, was an exception. After a $185 million campaign funded by gig-economy giants, Californians voted to weaken labor protections for contract workers.

Progressives balked at the notion that they are to blame for moderate candidates’ losses.

On Friday, Ocasio-Cortez, a self-proclaimed democratic socialist, tweeted that some of the losing candidates failed to do the necessary digital and in-person organizing to win.

“The whole ‘progressivism is bad’ argument just doesn’t have any compelling evidence that I’ve seen,” Ocasio Cortez said. “When it comes to ‘Defund’ & ‘Socialism’ attacks, people need to realize these are racial resentment attacks. You’re not gonna make that go away. You can make it less effective.”

“The fact that Trump had more coattails than Biden, the fact that we lost seats in the Senate and in the House when we won the presidency, is not the fault of the left,” Rebecca Katz, a progressive strategist, said. “Democrats and Republicans are both getting blamed for the economy. Republicans killed any relief to the American people and the American people never got that message and that is the fault of Democratic leadership.”

All told, progressives will have expanded their leverage in what is shaping up to be a smaller House majority. As moderate members lost their races to Republicans, progressive primary wins in safe Democratic districts will bring a new class of young left-leaning members to the House, like Cori Bush (Mo.), Mondaire Jones (N.Y.), Marie Newman (Ill.) and Jamaal Bowman (N.Y.). And more progressive voters — young voters — influenced Biden’s wins in states like Arizona and Wisconsin.