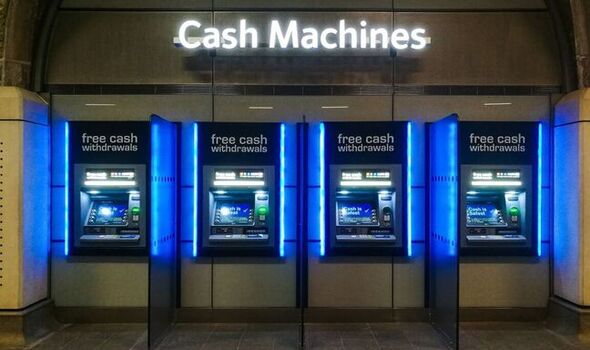 They backed an amendment to the Financial Services and Markets Bill that would oblige the government to create a “minimum level” of access to machines that do not charge.

The rebellion, although unsuccessful, is another warning shot for Rishi Sunak after he was forced into successive U-turns on planning and wind farms. It comes as the Daily Express battles to save Britain’s struggling high streets.

Many are being replaced by machines which charge a transaction fee. Labour’s Siobhain McDonagh, who tabled the amendment, called on the Government to ensure free access to cash machines, telling MPs: “Surely it cannot be right in 2022 that almost a quarter of our cash machines charge people to access their own money. The facts are stark but simple.”

During the Commons debate, former minister David Mundell said: “We cannot just simply move in an unstructured way to a cashless society.

“There are about eight million people – whether rural dwellers or those in deprived areas – who rely on cash and will continue to rely on it.”

But Tory MP Kit Malthouse said cash payments had plunged between 2010 and 2020 and had fallen further during the pandemic.

He added: “There are significant advantages to cashless transactions, not least in the elimination of crime.”

He added: “This Government is indeed legislating to safeguard access to cash and that’s what the Financial Services and Markets Bill this afternoon will do through a very significant intervention.”