Home » Politics » Republicans Want To End Higher Jobless Pay. For Some Workers It Hasn’t Even Begun.

Republicans eager for the economy to reopen complain that expanded unemployment benefits are making it difficult for some businesses to keep or rehire their workers.

But many workers across the country who left their jobs during the coronavirus pandemic haven’t received benefits in the first place.

Elaine Perez of Fort Myers, Florida, said it took her and her husband six weeks just to apply for benefits on the state government’s crash-happy website for unemployment claims, and they still haven’t received any money.

“It feels like it’s designed to make people not want to do it,” Perez, 28, said in an interview. Last week her employer asked her to resume her work as an in-home behavioral therapist.

Perez is 38 weeks pregnant, meaning she’s potentially at higher risk of serious illness during the pandemic. She doesn’t feel safe going back. Yet, if she turns down the work, she could lose eligibility for the benefits she still hasn’t received.

She’s among millions of workers caught in this bind, thanks in part to an antiquated unemployment insurance program that’s been crushed by the pandemic-fueled recession and in part to earlier decisions by Florida lawmakers to make it difficult to obtain benefits.

The unemployment system in the U.S. is a patchwork of 52 different state-level agencies, mostly understaffed and with technology in varying degrees of decay, overseen by the U.S. Department of Labor. Even in 2014 and 2015, when far fewer people sought benefits, it could take as long as two hours to get through to someone on the phone in a state workforce agency.

When the pandemic forced millions of Americans out of work this spring, these agencies could hardly keep up. Then Congress upped the level of complexity in March, when lawmakers passed the Coronavirus Aid, Relief, and Economic Security Act, or CARES Act.

The new policies made even more workers eligible for unemployment benefits, extending coverage to independent contractors and gig workers. Most notably, lawmakers created what’s been called unemployment on steroids, an extra $600 a week for all beneficiaries. Combined with regular benefits, it’s more than many of the lowest-wage workers ever earn and twice the federal minimum wage.

The money should’ve been a boon for the legions of unemployed workers. And for many, it has been a lifeline. But states have struggled mightily to distribute the benefits, with some claimants waiting two whole months before they’ve seen a penny.

More than 38 million Americans have filed unemployment claims since the coronavirus lockdowns began earlier this year, but barely half had likely been paid as of early May, according to an analysis of Labor Department data by the activist group One Fair Wage.

Republicans, however, are more fixated on the possibility that, because of the extra $600 per week, some workers might turn down job offers.

Sen. Lindsey Graham (R-S.C.) asked President Donald Trump on Tuesday to oppose extending the added $600 past July 31, when it’s due to expire. Trump did not rule out signing a bill that would extend current benefits, but was sympathetic to Graham’s position, calling it a “problem.”

“He agrees that it is hurting the economic recovery,” Graham said after meeting with Trump and Senate Republicans on Capitol Hill.

Business groups have long argued against generous benefits, worrying about being forced to raise pay for the lowest-wage workers. And state workforce policies have been designed to make it difficult to win benefits, said One Fair Wage President Saru Jayaraman.

“They don’t want the benefits to be easy to access because they want people willing to take low-wage jobs,” Jayaraman said. “We always want to keep a pool of low-wage labor at the ready.”

There are some Republicans who acknowledge the problem with benefits not being paid.

“The antiquated systems that exist in our states make it difficult to get their base benefits,” Sen. Tim Scott (R-S.C.) told HuffPost on Wednesday, citing the surge in unemployment claims in South Carolina over the past month.

“The good news is you know the money is coming. The bad news is it doesn’t help you today,” he added. 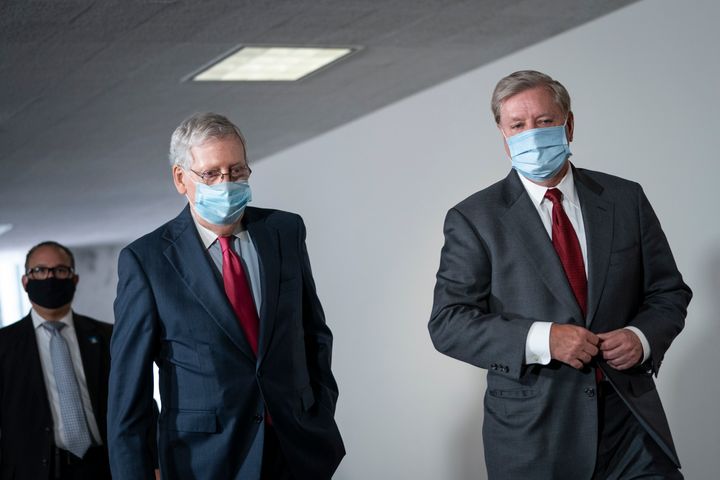 As of Thursday morning, more than 38 million Americans have filed initial claims for benefits in the last three months. But the initial claim is only a request for the state to make a decision on whether someone is eligible. Only 27 million filed “continued claims” the week after their initial claim, according to the latest numbers, a necessary step for receiving benefits. The data don’t say how many are actually getting paid.

Nine states have still not even begun to distribute benefits under the new eligibility criteria for workers who aren’t normally covered, such as people who quit their jobs because of the pandemic or independent contractors like Uber drivers.

It’s likely that the Labor Department is falling short of its own core performance standard of paying 87% of benefits within three weeks of initial claims. Democrats have criticized labor Secretary Eugene Scalia for the benefit delays, while the department has praised itself for implementing the new policies.

There are tremendous differences among states. Vermont seems to be paying all its unemployed people on time, according to the analysis by One Fair Wage. Florida, by contrast, is only paying 32% of claims, one of the worst performances of any state.

The Century Foundation, a progressive think tank, has estimated that only 20% of Florida unemployment claims had been paid as of mid-April. People who are eligible should receive all the money they missed during the weeks they waited.

Perez said she and her husband, an Uber driver, have fallen behind on their mortgage since their incomes cratered more than a month ago. Not only have they not received benefits, they’re not even sure if his application has been finalized, and they can’t get an answer by calling the state government.

“It feels like no one’s coming to help,” Perez said.

Florida reformed its unemployment system in 2011, slashing the number of weeks of benefits available, making it easier for businesses to challenge claims from former employees, and requiring laid off workers to file their claims online. The state’s website has always had problems, and in the coronavirus outbreak it got so bad that the director of the state Department of Economic Opportunity abjectly apologized.

The changes resulted in far fewer Florida layoff victims getting paid. In 2007, almost a third of unemployed people in the state received benefits. Last year only 11% did. Similar changes in other states that followed Florida’s example on cutting benefits contributed to a significant drop in the rate of unemployed people receiving benefits nationally, according to a 2018 Urban Institute report.

Sen. Rick Scott (R-Fla.), who served as Florida’s governor at the time of the reforms, said it’s a shame how much trouble states have had paying benefits.

“No one anticipated the numbers, just how unprecedented they’ve been,” Scott told HuffPost this week, adding that Congress made things more difficult with the new policies. “So I think all those things together has made it difficult all over the country. You feel sorry for people that need the unemployment.”