Each year, right-wing media ritually attempts to stir up a moral panic over a “war on Christmas.” Conservative pundits claim Democrats’ fixation on saying “happy holidays” instead of “Merry Christmas” is an affront to American values.

It’s happening again this year, but the debate has taken on a new meaning amidst the coronavirus pandemic — and the stakes are actually incredibly high. Fox News hosts and right-wing media influencers are aggressively claiming that the secular warriors are fighting Christmas with social distancing measures and government restrictions. Convincing people that these basic public health efforts are illegitimate and offensive is incredibly dangerous as COVID-19 cases surge around the country and the United States surpasses its record for the number of deaths from the virus in a single day.

Health officials have advised Americans to limit gatherings in an effort to stem the pandemic, which conservative media outlets have used as proof of everything from an attack on Christian values to a nefarious plot to consolidate power. In doing so, they are once again promoting dangerous misinformation that has led to harmful misconceptions about coronavirus and likely helped its spread.

And in the weeks ahead of Christmas, right-wing media figures have been warning that attempts to control the spread of the virus are evidence of leftist efforts to cancel the holiday.

Tucker Carlson, a top-rated Fox News host and informal adviser to President Donald Trump, recently gave a nonsensical monologue about “power-hungry leaders trying to cancel Christmas.” He claimed politicians were attempting to ruin Christmas because they viewed the holiday as diminishing their authority.

“They’ve figured out that Christmas is bigger than they are, and therefore, it’s a threat to them. Better cancel it ― and, in fact, they’re trying hard,” Carlson said. He also told viewers that “death is inevitable” and that “maybe we should pause before we destroy the living in the name of trying to eliminate it.”

In a tweet featuring a video of Dr. Anthony Fauci talking with Jake Tapper about social distancing measures, One America News correspondent and neo-Nazi collaborator Jack Posobiec wrote that the CNN host “does not get to tell me whether or not my family celebrates the birth of Jesus Christ.” Breitbart ran a column asking if readers would allow “fascist governors” to “cancel your Christmas.” Right-wing radio host Mark Levin tweeted that “the government doesn’t have the power to cancel Thanksgiving or Christmas!” 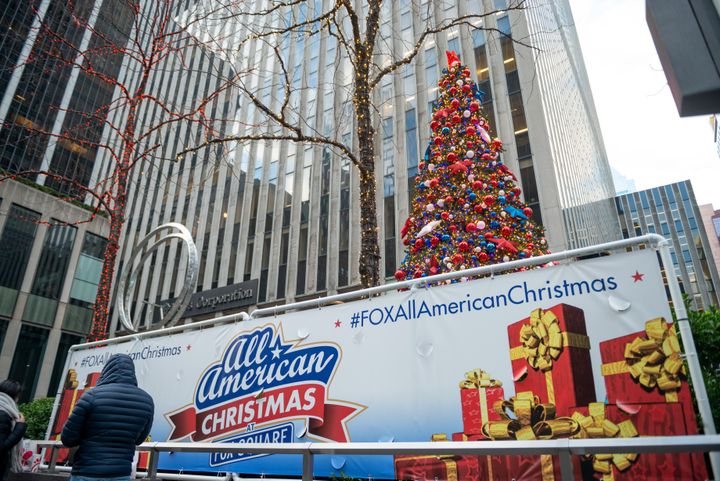 Republican lawmakers have also tried to equate guidelines meant to limit gatherings during the holiday season with a leftist attempt to undermine American traditions, while ignoring skyrocketing coronavirus cases and public health advice.

The baseless narrative that Christmas is somehow being outlawed or erased from public celebration is one of the most enduring talking points for conservative culture warriors, first gaining traction in the mid-2000s through former Fox News hosts such as Bill O’Reilly. During the pandemic, right-wing pundits have infused their message with the panic of “cancel culture” and included Thanksgiving in their fearmongering.

“The left has always hated Thanksgiving … now they’re using the virus as an excuse for you not to be thankful,” right-wing activist Charlie Kirk claimed last month.

Health officials have seen a surge in coronavirus cases following Thanksgiving, and the situation is only expected to worsen in the coming weeks.

COVID-19 cases increased across Canada following the country’s Thanksgiving holiday in October, resulting in numerous provinces implementing restrictions on social gatherings. Canadian Prime Minister Justin Trudeau told citizens that “a normal Christmas is quite frankly out of the question,” and the premier of Manitoba, Brian Pallister, gave an emotional plea for people to take the virus seriously.

Many health experts worry that travel and gatherings over Christmas will exacerbate the latest spike in cases even more than Thanksgiving, as COVID-19 cases are already on the rise. States such as California are dealing with the possibility of running out of intensive care unit beds and are urging residents to stay home. Vaccines are slowly becoming available to the public, but it could be months before they are widely accessible. Until then, social distancing remains one of the few things that can mitigate the pandemic.

But in right-wing media, these harsh realities are nonexistent. As they have for much of the pandemic, Fox News hosts and pro-Trump media activists are peddling falsehoods about social distancing and the administration’s handling of the pandemic. To them, the threat does not come from coronavirus; it comes from the left.