Stew Leonard Jr. of Stew Leonard’s discusses businesses reopening and how the grocery chain has adapted to coronavirus.

Get all the latest news on coronavirus and more delivered daily to your inbox. Sign up here.

Since its launch nearly two months ago, the government's rescue effort for small businesses has been peppered with complaints over terms of the loan programs and the piecemeal way the programs have been implemented.

In Congress, lawmakers have yet another beef — they can't get answers from the Small Business Administration, which is leading the effort.

Senate Minority Leader Chuck Schumer (D., N.Y.) has sent eight letters to SBA Administrator Jovita Carranza since March, and hasn't received one response, aides say. In a statement, Mr. Schumer faulted the SBA for what he called its "lack of transparency and unresponsiveness."

DESPITE PPP AID, SOME SMALL BUSINESSES ARE CHOOSING TO STAY CLOSED

It isn't unusual for Mr. Schumer to criticize agencies run by appointees of Republican President Trump, but frustration with the SBA's handling of its small business rescue programs extends to small business advocates — and across the aisle.

Sen. Marco Rubio (R., Fla.) told reporters recently that he has sought to get top SBA officials to appear before the Senate Small Business Committee that he chairs. "At some point we need to have a hearing, and we've been trying to get the right people," Mr. Rubio said. "We're going to be patient, but not forever."

An SBA spokesperson said Ms. Carranza, along with Treasury Secretary Steven Mnuchin, have participated in conference calls with congressional small business panels, and that "agencies on the frontline of pandemic economic response have been focused on those efforts throughout May."

Both critics and defenders of the SBA acknowledge that the relatively small bureaucracy, with about 4,000 staffers, has been faced with a monumental challenge in trying to keep small businesses and their employees afloat amid business closures forced by the coronavirus pandemic.

"Certainly there have been challenges, and not everything has been smooth sailing," said Rep. Steve Chabot (R., Ohio), ranking member on the House Small Business Committee. "This is probably the greatest economic disaster in American history, so they've had to deal in record time with something unprecedented."

At the same time, Ms. Carranza has been largely out of sight amid the crisis, using Twitter to give updates on the agency's efforts. She declined an interview through a spokesperson.

SBA officials say the $670 billion Paycheck Protection Program has been a success and that the small agency has punched above its weight. But a recent inspector general report dinged the SBA for veering from congressional mandates, and small businesses and their advocates have complained about on-the-fly rule changes.

In addition to the PPP, the SBA oversees an Economic Injury Disaster Loan program that has also been subject to complaints.

The SBA says it had approved 252,340 disaster loans worth nearly $25 billion as of May 17. But there is a large backlog — it had 5.4 million disaster loan applications by the end of last month, more than 50 times what it gets in a typical year, according to agency planning documents. 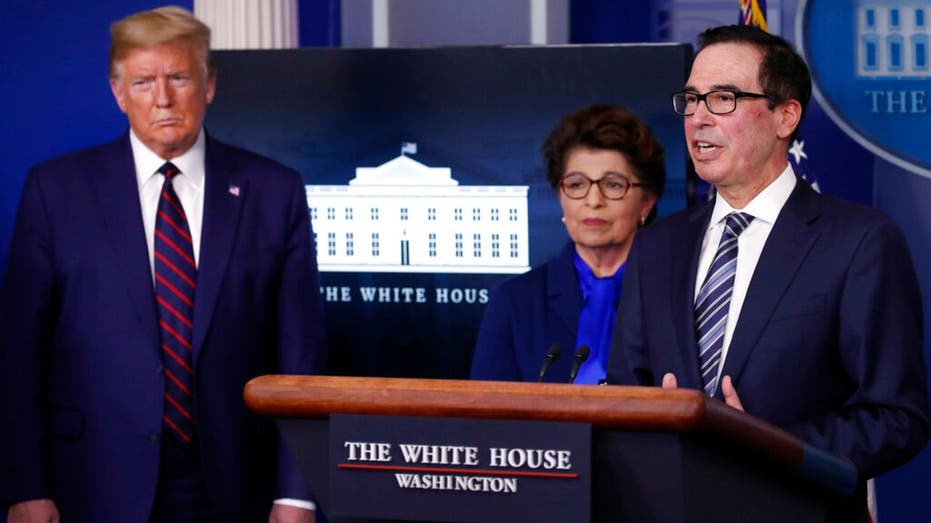 President Donald Trump and Jovita Carranza, administrator of the Small Business Administration, listen as Trea speaks about the coronavirus in the James Brady Press Briefing Room of the White House, Thursday, April 2, 2020, in Washington. (AP Photo/A

Marianne Gooch, president of Houston-based consulting firm DynaComm, hoped to use a disaster loan for continuing business expenses amid a drop-off in client demand.

Ms. Gooch said she first applied March 21 and has since repeatedly tried contacting the SBA to get updates. She said she once called the customer service number and was told there was a four-hour wait to speak with a representative.

"I don't have any answers," Ms. Gooch said. "I'm just going to remain hopeful that one day I get an email from them…maybe they'll get to me some day."

In response to a question about the delays during an online congressional hearing Tuesday, Mr. Mnuchin said the SBA was "rebuilding the entire system" to manage the volume of disaster loans. "The SBA had significant systems issues getting the EIDL program up and running," Mr. Mnuchin conceded.

The SBA's planning for disasters includes a framework for scaling up staff and operations to correspond with an event's severity. The agency has recently been adding workers and advertising job openings, including positions for loan officers.

The current situation is different than typical disasters, where the damage is localized to one or a few areas and the SBA has more time to ramp up its response, according to William Shear, a director in the Government Accountability Office who has written extensively and testified before lawmakers about the disaster loan program.

In the case of the coronavirus pandemic, state efforts to limit the virus's spread — including mandated business closures — came in quick succession, causing near-instant economic damages to millions of small businesses.

Because the SBA is "responding kind of on the fly," Mr. Shear said, "it's no surprise that you have a lot of small businesses saying it's not clear what the rules are."

Yet some of the agency's current challenges mirror those during previous disasters, calling into question how much it has learned from past missteps. Following Hurricane Sandy in 2012, for example, the SBA said it was challenged by an unexpectedly high volume of disaster loan applications, according to a GAO report. The agency, on average, didn't meet its internal timeliness goals for processing the applications and also experienced glitches with its technological systems, the report found.

While the SBA had improved on timeliness by the 2017 hurricane season, the GAO found borrowers still faced "a number of challenges" during the application or review process, including poor customer service.

"All the major hurricanes where we've evaluated SBA's disaster loan program…there have been certainly challenges with the whole system of providing the appropriate information to the small businesses that are applying for assistance," Mr. Shear said.

Another sore point for disaster loan seekers: The program was initially open to small businesses in all 50 U.S. states and territories, but the SBA on its website now says it is only open to agricultural businesses due to funding limitations. The disaster loans have also been capped at $150,000 instead of the usual $2 million, according to lawmakers.

The lawmakers' offices say they are still awaiting a reply.