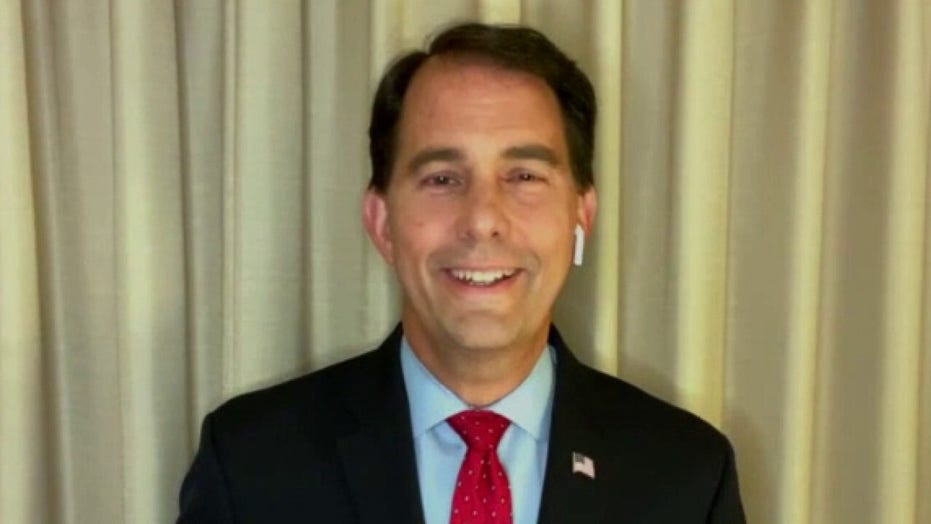 Over the weekend, Gov. Tony Evers sent a letter to Trump informing him that he and others were concerned that the president's presence would "hinder our healing" and "only delay our work to overcome division and move forward together."

Unlike Evers, Walker said, "the president actually came in and provided the leadership to get things under control, along with local authorities. And I think the people in Kenosha want to thank him as well as talk about how he could help them as they rebuild that great city going forward."

Walker also criticized Portland Mayor Ted Wheeler who accused Trump of causing an outbreak of deadly violence in his city over the weekend.

"This is liberals and Democrats who fail time and time again whether it's in Portland, Seattle, Chicago, we saw it in Madison in Wisconsin, we see it now in Kenosha, we see it in New York and elsewhere," Walker said. "They failed — Joe Biden and Kamala Harris — failed to even talk about this at their convention."

He added that once Trump provided additional law enforcmeent help in Wisconsin, "things got under control. It could happen anywhere else in the country. It can be under control but it requires mayors and governors to get beyond the politics and actually support the people that they're elected to represent."

"It's amazing when you think about it," Walker added. "Three nights of violence and two deaths before Joe Biden even said a word about the rioters there [last week]. I have to believe, unfortunately, it wasn't because of a change of heart. It was because a change in the polling and the focus groups, which is why he spoke again today in Pittsburgh about this very subject. He knows he's in trouble."

On Monday, Biden made remarks in the Steel City during which he condemned the ongoing looting and violence in the wake of the shooting of Jacob Blake in Kenosha. Biden added that Trump couldn't stop the violence "because for years, he's fomented it."

The White House has claimed that local leaders in Kenosha welcome Trump's visit.

"The White House has been humbled by the outreach of individuals from Kenosha who have welcomed the President’s visit and are longing for leadership to support local law enforcement and businesses that have been vandalized," White House spokesman Judd Deere said Sunday. "President Trump looks forward to visiting on Tuesday and helping this great city heal and rebuild."