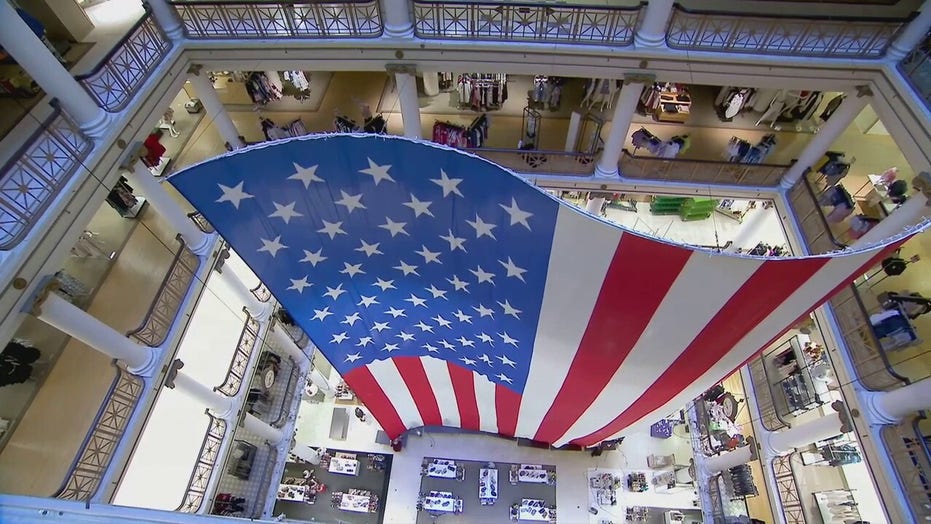 The flag is a replica of an original that was retired in 2003 and covered 5,000 square feet

In the town square of my hometown of Red Oak, Iowa, you see her gleaming in the sunlight. And you see her wave in metro centers and main streets spanning coast to coast, on military bases around the globe and on the front porches of homes where loved ones are serving overseas.

Our nation’s flag – the American Flag – is a symbol of our strength, of our freedom, and of our shared values and common bond as fellow Americans.

And for me, as a combat veteran, it holds a very special meaning.

In the summer of 1989, when I was a sophomore at Iowa State University, I was blessed with the unique opportunity of traveling overseas as a part of our school’s agricultural exchange program. The trip was an experience unlike any other, especially for the daughter of a small town, rural Iowa farmer like me.

We visited the Soviet Union – a part that is in modern-day Ukraine. But we might as well have traveled to another planet. My experience was unforgettable and had a profound impact on my life.

Right then and there I realized not only how grateful I was for the many freedoms I took for granted, but that I wanted to do my part to defend them. I needed to serve my nation. So, when I returned home, I joined my school’s Army ROTC program.

I didn’t know it then, but that decision would change my life, leading to a military career spanning 23 years in the Army Reserves and the Iowa Army National Guard, including my service as a company commander in Kuwait and Iraq during Operation Iraqi Freedom.

For more than two decades, I proudly wore our nation’s uniform, as so many millions of American men and women have before me. Every time I put on that uniform, I donned the Stars and Stripes – and with it came enormous pride for our country and everything our flag represents.

Today when I see Old Glory fly, I can’t help but be reminded of the history of our national anthem. At the break of dawn when all the smoke from rockets and shells faded at Fort McHenry, Francis Scott Key saw the American flag flying over the fort, signaling only one thing: an American victory.

With this lasting image in mind, Key penned these words:

…Whose broad stripes and bright stars through the perilous fight
O’er the ramparts we watched were so gallantly streaming?
And the rocket’s red glare, the bombs bursting in air,
Gave proof through the night that our flag was still there,
O say does that star-spangled banner yet wave
O’er the land of the free and the home of the brave.

As we celebrate Flag Day, let’s never lose sight of what our American Flag represents. It is a symbol of hope, opportunity and freedom for all the world to see. May the Stars and Stripes always remind us to cherish our liberties and honor and celebrate the greatest, freest nation on the face of the planet.