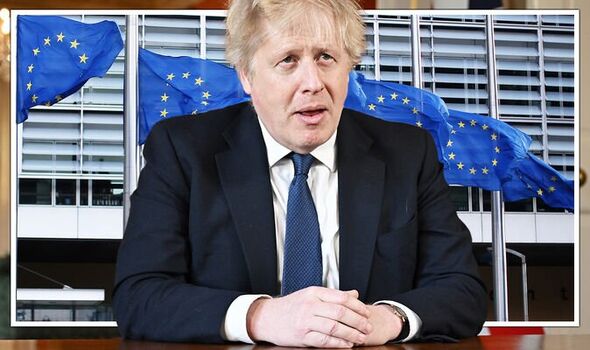 The PM’s Brexit Freedoms Bill will rid Britain of rules and regulations that cost firms an estimated £1billion a year. Other key measures will focus on fostering economic growth to provide a ­long-term solution to the cost-of-living crisis.

The landmark bill will scrap the current special status for EU law that still exists in the UK, and make it easier to remove any restrictions still in force.

It will be the flagship measure in the legislative programme to be announced in the Queen’s Speech at the State Opening of Parliament.

Senior figures in Downing Street believe the drive to maximise the UK’s Brexit freedom and cut bureaucracy will help rally Tory MPs behind the PM – and help the Government bounce back from an expected drubbing in today’s local council elections.

A Downing Street source said: “The first bill in the Queen’s Speech will be on cutting EU bureaucracy. It will end the supremacy of EU law.

“There are still thousands of EU regulations. This will be the removal of unnecessary restrictions that add to the cost of British business.

“In the past with Brexit, there have been symbolic rather than practical benefits. So this will be a major move in that direction.

“This is the bread and butter of Brexit and part of a major deregulation drive.

“We have not felt the true benefits of Brexit yet, but the Queen’s Speech will set out how Britain will benefit moving forwards.

“It is how Britain can map out it’s own destiny. It will be a bonfire of red tape.”

Aides insist the cost of living is still “very much at the top of the Prime Minister’s agenda”.

The PM has ordered every Whitehall department to identify waste that can be cut and potential savings that can be made to ensure value for money for taxpayers.

Mr Johnson yesterday rejected claims that the Tories are “out of touch” with voters about the cost-of-living squeeze.

He acknowledged that the UK was going through a “tough patch” with energy bills and other household costs soaring.

But he insisted the country was better placed than it was during economic crises in the 1980s and 1990s.

Mr Johnson addressed the concerns during a campaign visit to Southampton yesterday ahead of the local elections.

He said: “The best future for the country is to get through the tough patch we have now, support people in any way that we can, but remember we are now seeing a lot of employment and people in high-wage, high-skilled jobs.

He said the Government was offering help to families hit by rising prices, while arguing that the long-term solution to the crisis was to build a “high wage” economy.

He added: “What we want to do is help people in any way that we can through the aftershocks of Covid.

“What you’ve got is inflationary spikes mainly in energy, but that is knocking on into all sorts of other costs for families.

“So we are helping in the immediate term – a £22billion package with £9.1billion going on fuel alone. The most important thing is to have a strong economy with high-wage, high-skilled jobs.”

Mr Johnson also vowed to lead the Tories into the next general election despite fears the party faces a hammering in today’s polls in the wake of the Downing Street party scandal.

The PM told reporters that he was “absolutely confident that we have the right agenda for the country”.

He said: “I have a big mandate to deliver.”

Asked if he would still be there at the next election, due to be held in 2024 at the latest, Mr Johnson said: “Of course. And I’m also very confident we will succeed at the next election.” Opposition leaders made their final pitch to voters yesterday ahead of today’s polls.

He said: “The Conservatives are doing nothing to help people now. Instead, they’ve made it worse by imposing 15 Tory tax rises, including this month’s national insurance rise on business and working people.

“Labour’s plan to tackle the cost-of-living crisis puts money back in your pocket.

“Our call for an emergency budget would mean action now. We wouldn’t go ahead with this unfair Conservative tax hike on working people, which is the wrong tax at the wrong time.”

He repeated Labour’s call for an emergency budget and a windfall tax on oil and gas producers.

Liberal Democrats leader Sir Ed Davey said the elections were a “chance to send a shock wave from communities around the country to the heart of the Conservative Party”.

He added: “Boris Johnson is not fit to lead the country and he needs to go. At this time of national crisis, we can’t afford to have a law-breaking Prime Minister and a tax-hiking Chancellor.”

Meanwhile, Environment Secretary George Eustice was slammed as “patronising” and “out of touch” yesterday after advising shoppers to choose value brands to ease the pressure of rising food prices.

Labour shadow chancellor Rachel Reeves said: “The response by the Conservatives to the cost-of-living crisis has been nothing short of insulting. They are out of touch and out of ideas.”

Lib Dem work and pensions spokeswoman Wendy Chamberlain said: “These comments show George Eustice and the Conservatives are living in a parallel universe.

“Families and pensioners who can’t afford their weekly shop need more help, not patronising advice from a clueless minister.”