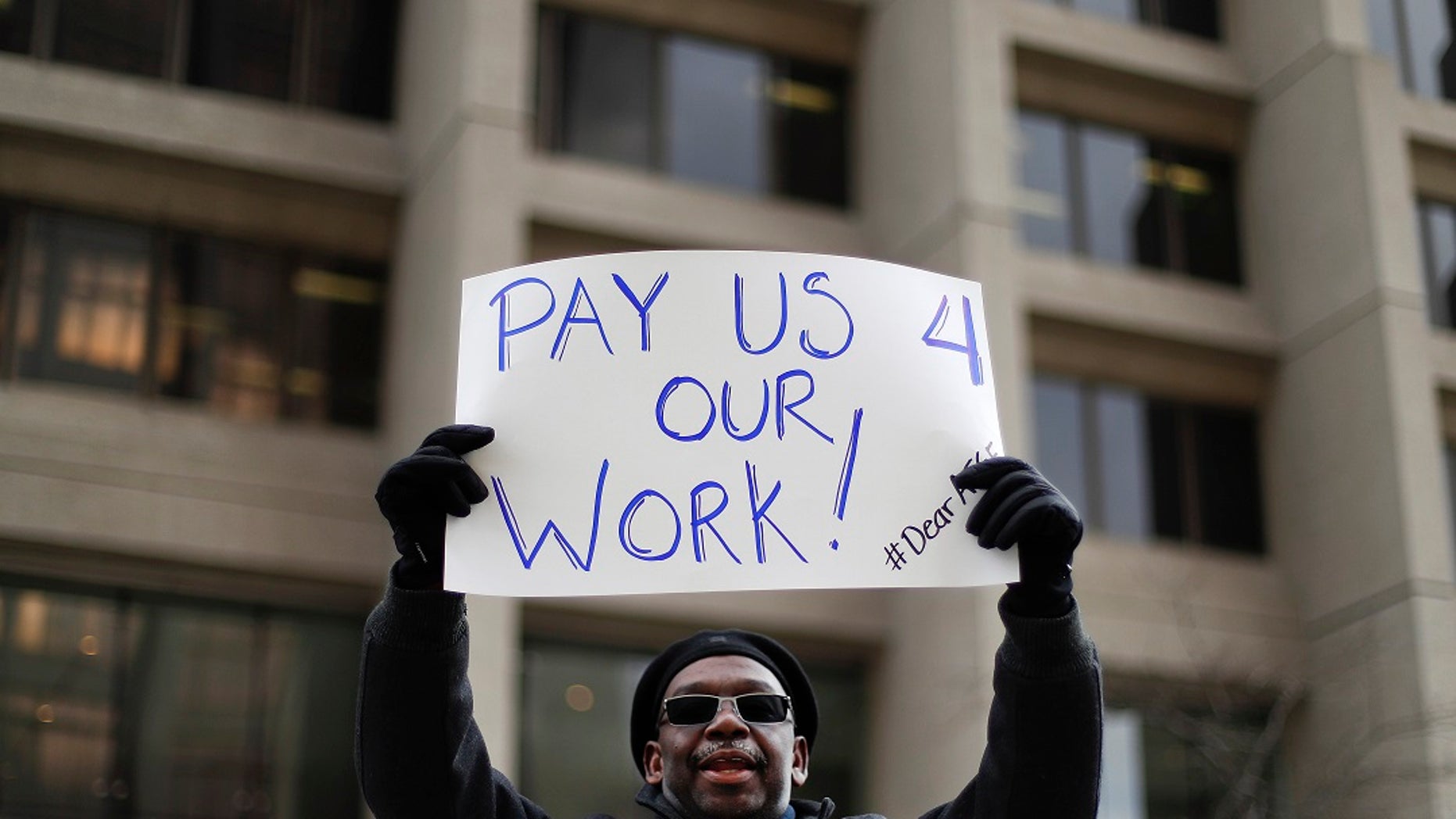 Christopher Belcher, a Department of Veterans Affairs employee, holds a sign during a rally to call for an end to the partial government shutdown, in Detroit, Thursday, Jan. 10, 2019. (Associated Press)

At the stroke of midnight Saturday, the partial government shutdown entered its 22nd day and became the longest in U.S. history.

The showdown between President Trump and Democrats, which began Dec. 22 over funding for Trump’s proposed border wall, has led to employee furloughs and some having to work without pay.

As some 800,000 federal workers received blank pay statements Friday, Congress voted to guarantee them back pay whenever the shutdown is resolved — and then lawmakers adjourned for the weekend.

The missing paychecks have put pressure on lawmakers and Trump to end the impasse. Some workers posted photos of empty pay stubs on Twitter and vented their frustration.

“I saw the zeros in my pay stub today, and it’s a combination of reality setting in and just sadness,” air traffic controller Josh Maria told the Associated Press. 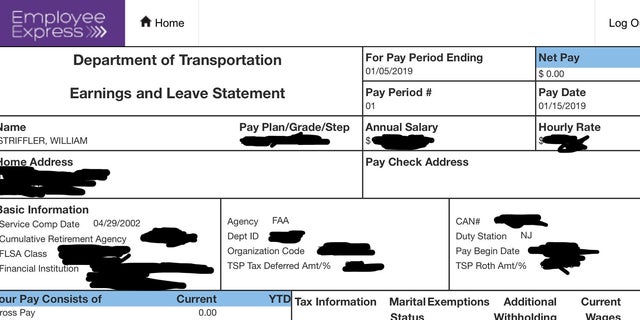 This portion of Bill Striffler’s electronic pay stub provided by him to the Associated Press on Friday, Jan. 11, 2019, with portions blacked out by him, shows his recent pay to be $0.00 for his work as an air traffic controller at Newark Airport. Some 800,000 federal employees, more than half still on the job, were due to miss their first paycheck Friday under a partial government shutdown as President Donald Trump and Congress remain at odds over funding for his long-promised U.S.-Mexico border wall. (Bill Striffler via AP)
(AP)

Trump has floated the possibility of declaring a national emergency to bypass Congress to fund the wall but has walked back his stance in recent days. The White House has also explored diverting money for border wall construction from other accounts, including some of the $13.9 billion allocated to the Army Corps of Engineers.

REP. BIGGS: TRUMP SHOULD STAND FIRM TO FIGHT FOR THE BORDER WALL

"What we're not looking to do right now is national emergency," Trump said. He insisted that he had the authority to do that, adding that he's "not going to do it so fast" because he'd still prefer to work a deal with Congress.

That has led to an outcry from officials in Puerto Rico and some states recovering from natural disasters.

“It’s going to p— off a lot of members,” Rep. Mike Simpson, R-Idaho, a senior member of the House Appropriations Committee, told the Wall Street Journal.

Some Republicans are pushing for Trump to declare a national emergency.

"This isn't a wall between Mexico and the United States. This is a wall between his failures of his administration," Pelosi told reporters. "This is a big diversion, and he's a master of diversion."