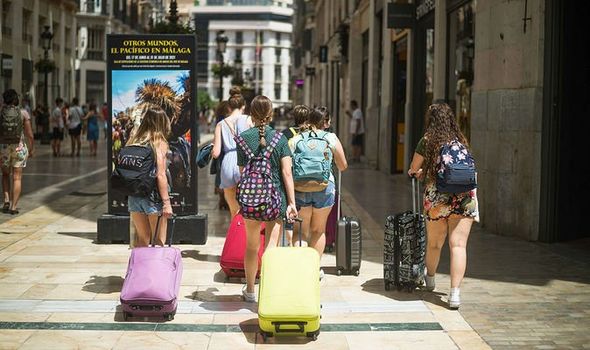 Now popular destinations Italy, Spain and Greece could be given amber-plus status because of surging Covid infections. Experts warned that such a move would leave around six million people facing last-minute quarantine.

A Department for Transport spokesman said no decisions have been taken yet.

He said: “The travel list allocations have not changed for Spain or Greece.

“We are closely monitoring the data and will take swift action on travel list allocations and international travel requirements should the data show that country’s risk to England has changed.”

Senior Government sources said that Italy is being “watched closely” by ministers as cases rise.

They said the country ‑ one of the hardest hit by the pandemic ‑ is now looking like a “risky bet” for a holiday.

Spain and Greece are both in the middle of a third wave of infections and could also be moved up to amber-plus.

But France could be moved back down to the amber list ‑ meaning double-vaccinated travellers would not need to isolate when they return ‑ at the next review, due on August 5, following a huge Cabinet row.

The Government’s decision to place France on the amber-plus list came amid fears of a rise in Beta variant Covid cases that could evade some vaccine protection.

Holidaymakers were forced to scrap breaks at the last minute as French trips were thrown into disarray.

Both Health Secretary Sajid Javid and Jonathan Van-Tam, the deputy chief medical officer, are understood to have pushed the Prime Minster hard for France to be classified as amber-plus.

Meanwhile, a minister has apologised for delays at the borders after travellers complained about “total chaos” at airports as schools closed and summer holidays began.

Airports and airlines dealt with their busiest weekend of the year so far, with hundreds more flights and thousands more passengers than at the peak of the pandemic.

But passengers complained of long queues to get through departures and arrivals on Saturday, with images posted on social media showing crowded terminals.

Policing minister Kit Malthouse apologised for delays at the borders as he suggested airline staff could be among those given isolation exemptions to relieve the pingdemic.

He said: “I know Border Force are one of the frontline services that will be able to access more of this test and release.

“And I think at Heathrow yesterday we had a technical issue with the e-gates where they went down for 90 minutes or so. That caused a problem and I’m very sorry about that, and I’m sorry for the people that were inconvenienced.

“Hopefully Border Force will be relieved of some of the aspects of the pingdemic.”

Asked whether airline staff could receive exemptions as well, he said: “Yes, we would be in conversation with employers.”

Chief executive John Holland-Kaye said additional staff would be on hand to ensure passengers have a “smooth journey”.

Passengers took to social media to complain about queues at London Stansted Airport, with one describing the scenes as “chaotic”.

Officials are expecting 958 flights at Manchester Airport from Friday to Monday, 224 at East Midlands Airport and 1,330 at Stansted.

Budget airline easyJet flew some 135,000 passengers from the UK at the weekend on more than 80 routes to green and amber-list destinations across Europe.

Tui said it had almost double the number of passengers travelling from Friday to Sunday compared with last weekend, with the Balearic Islands and Greece the “clear favourites”.

Jet2 said it had 170 flights departing to more than 40 destinations over the weekend.