The SNP Westminster leader accused the Prime Minister of planning to impose an “unelected and unaccountable” body on the Scottish Government’s decision, jeopardising devolution rules. But Boris Johnson brilliantly shut down Mr Blackford’s claim, which unsurprisingly backfired as the SNP continues to fight for an independent Scotland to re-join the EU. Mr Blackford said the UK Government has a “hostile agenda” against devolution.

During PMQs, he said: “Westminster’s plan to impose an unelected, unaccountable body to rule on decisions made by the Scottish Parliament will not be accepted.

The Prime Minister argued his plan was the “biggest single act of devolution in modern memory”.

He said: “On the contrary, what we are doing is possibly the biggest single act of devolution to Scotland, to Wales, to Northern Ireland, in modern memory and he should be celebrating the 70 powers or more than are going to be transferred to the elected people in Scotland.”

“He should be celebrating”, he blasted, adding: “What he wants is trade barriers between England and Scotland. 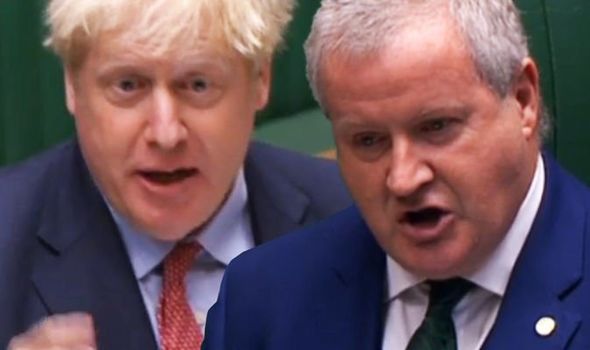 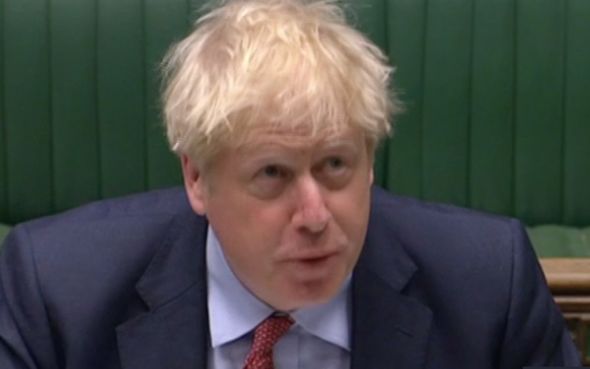 “He talks about unelected people, he wants to hand power to Brussels!”

The SNP politician replied: “We know this Government is undertaking a full-scale assault on devolution.

“A decade of Tory governments Scotland rejected, imposed on Scotland.

“It is no wonder the First Minister’s approval ratings are three times that of this Prime Minister.

“Effective leadership and respecting the will of the people contrasted with the bumbling shambles coming from Westminster.

“Scotland has the right to have her decision made by those we elect. Not bureaucrats appointed by Westminster.

“Will the Prime Minister guarantee that his plans will not be imposed on Scotland and Scotland will have the chance to choose for ourselves?”

The Prime Minister blasted in response: “It sounds extraordinary for him to attack unelected bureaucrats for any role they may have in Scotland when his proposal is to hand back the power that this place is going to be transferring to Scotland back to Brussels where they are neither elected nor accountable to the people of Scotland.

“So I don’t know what he means.