The work of Rob Rogers, the veteran political cartoonist fired from the Pittsburgh Post-Gazette in June after the newspaper’s publisher and editorial page director censored a string of offerings critical of President Donald Trump, is being censored no more.

As of Wednesday, the public can view Rogers’ unpublished cartoons and sketches at the George Washington University’s Corcoran School of the Arts and Design in Washington. The exhibit aims to illustrate the importance of critiquing power through creative expression and its role in a democracy.

“Spiked: The Unpublished Political Cartoons of Rob Rogers” features 10 cartoons and eight sketches of ideas from the Pulitzer Prize finalist that his pro-Trump bosses declined to publish earlier this year, before firing him. 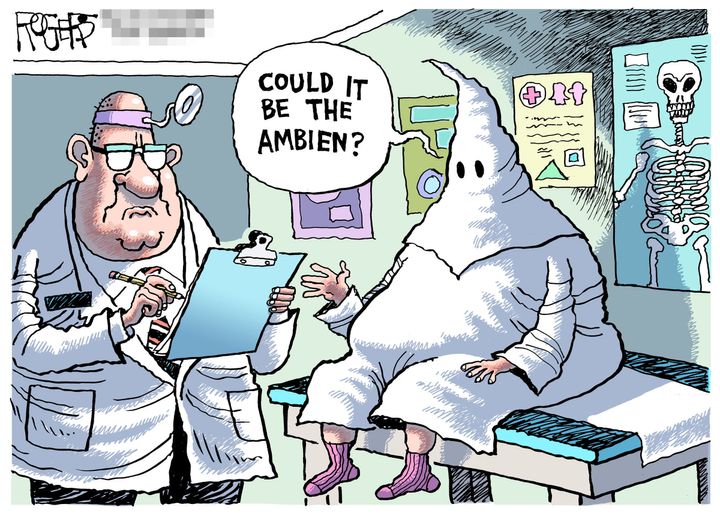 Rogers, who worked at the Post-Gazette for 25 years, has been outspoken since his firing about what many see as growing editorial oversight from the newspaper’s publisher, John Robinson Block, and his recently installed editorial page director, Keith Burris. Critics say that under their guidance, the paper has taken a decidedly pro-Trump stance.

According to Rogers, the onslaught of spiked cartoons began when Burris came on board in March. He pointed to a sketch of the first idea that he said Burris rejected, drawn in response to Trump’s steel tariffs and threats of a trade war, as well as the revolving door of White House officials leaving the administration.

In the cartoon, Rogers places Trump amid a battle, with the White House crumbling to the ground.

“I love the smell of napalm in the morning,” Trump says in the cartoon, referencing the most famous line from the movie “Apocalypse Now.”

Rogers said that he tried to compromise with Burris, producing a Trump-related cartoon that was “not quite as biting.” As several other cartoons got spiked, he said he continually tried to comply with instructions to be less “provocative” or “edgy.”

Among the 10 unpublished cartoons in the exhibit is the one that received perhaps the most national attention, drawn at the height of the controversy over the Trump administration policy of dealing with undocumented immigrants by separating children from their parents at the U.S.-Mexico border. 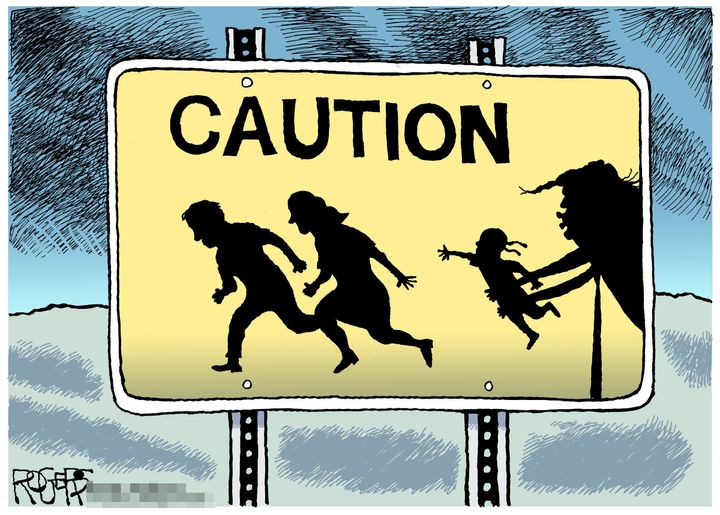 “I was just pissed,” Rogers said, explaining that he drew it after a series of rejected cartoons that eventually precipitated his firing.

“It ended up getting circulated so much that people started saying, ‘This is the cartoon that got him fired!’ And I was like, ‘Well, not really,’” he said.

“Listen, I’m fine if people think that, because I love this cartoon.”

Rogers’ firing was one of several scandals this year involving politics-related decisions from Block and Burris, causing considerable tension among the paper’s staff and protests from readers. In response to Rogers’ firing, the Newspaper Guild of Pittsburgh, the union representing the paper’s reporters and editors, took out an ad to affirm their independence from the editorial page. The paper also announced recently that it is cutting down its print edition from seven days a week to five.

“If I had advice for them, I’d say: ‘Get out,’” he said of his former colleagues, expressing concerns about the paper’s “top-down management” and how its “influence creeps into all sides.” 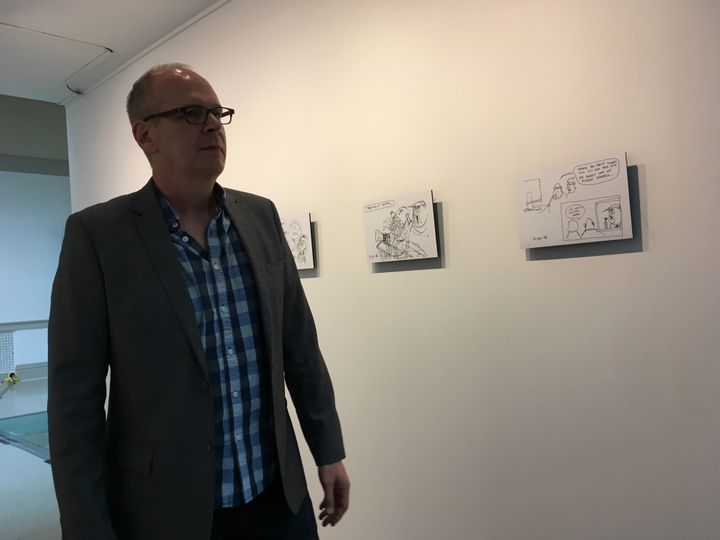 Rogers’ recent work, which includes more cartoons critical of Trump, continues to appear in syndication, and he said that he has received freelance offers.

In spotlighting Rogers’ cartoons, the Corcoran’s director, Sanjit Sethi, noted the odd circumstances of the exhibit, which came together within a few weeks of Rogers’ firing. “Ideally,” Sethi said, “this exhibition should have never happened” had Rogers’ cartoons been published and he had kept his job.

In the coming months, the Corcoran will also host “a series of conversations regarding issues around censorship, freedom of the press, journalistic integrity and the consequences of nationalism to a democracy,” the school said in a statement.

This fall, Rogers’ unpublished cartoons will head back to Pittsburgh for a show at the University of Pittsburgh’s art gallery. The exhibit will also feature some of his earlier work, with a public event planned in December.

“Spiked: The Unpublished Political Cartoons of Rob Rogers,” will be on view at the George Washington University’s Corcoran School of the Arts and Design in Washington until Oct. 14.