The reminders of pandemic-driven suffering among students in Clark County, Nev., have come in droves.

Since schools shut their doors in March, an early-warning system that monitors students’ mental health episodes has sent more than 3,100 alerts to district officials, raising alarms about suicidal thoughts, possible self-harm or cries for care. By December, 18 students had taken their own lives.

The spate of student suicides in and around Las Vegas has pushed the Clark County district, the nation’s fifth largest, toward bringing students back as quickly as possible. This month, the school board gave the green light to phase in the return of some elementary school grades and groups of struggling students even as greater Las Vegas continues to post huge numbers of coronavirus cases and deaths.

Superintendents across the nation are weighing the benefit of in-person education against the cost of public health, watching teachers and staff become sick and, in some cases, die, but also seeing the psychological and academic toll that school closings are having on children nearly a year in. The risk of student suicides has quietly stirred many district leaders, leading some, like the state superintendent in Arizona, to cite that fear in public pleas to help mitigate the virus’s spread.

In Clark County, it forced the superintendent’s hand.

“When we started to see the uptick in children taking their lives, we knew it wasn’t just the Covid numbers we need to look at anymore,” said Jesus Jara, the Clark County superintendent. “We have to find a way to put our hands on our kids, to see them, to look at them. They’ve got to start seeing some movement, some hope.”

Adolescent suicide during the pandemic cannot conclusively be linked to school closures; national data on suicides in 2020 have yet to be compiled. One study from the Centers for Disease Control and Prevention showed that the percentage of youth emergency room visits that were for mental health reasons had risen during the pandemic. The actual number of those visits fell, though researchers noted that many people were avoiding hospitals that were dealing with the crush of coronavirus patients. And a compilation of emergency calls in more than 40 states among all age groups showed increased numbers related to mental health.

Even in normal circumstances, suicides are impulsive, unpredictable and difficult to ascribe to specific causes. The pandemic has created conditions unlike anything mental health professionals have seen before, making causation that much more difficult to determine.

But Greta Massetti, who studies the effects of violence and trauma on children at the C.D.C., said there was “definitely reason to be concerned because it makes conceptual sense.” Millions of children had relied on schools for mental health services that have now been restricted, she noted.

In Clark County, 18 suicides over nine months of closure is double the nine the district had the entire previous year, Dr. Jara said. One student left a note saying he had nothing to look forward to. The youngest student he has lost to suicide was 9. 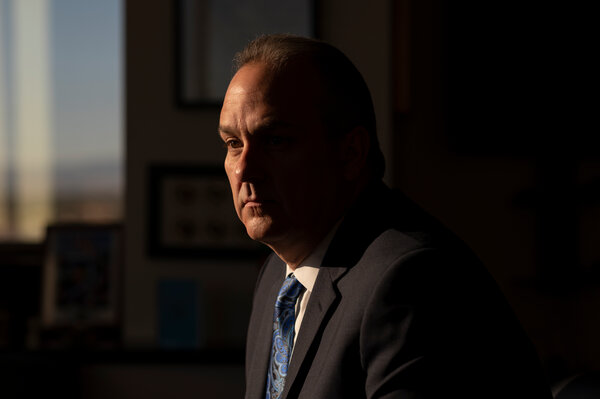 Over the summer, as President Donald J. Trump was trying to strong-arm schools into reopening, Dr. Robert R. Redfield, then the C.D.C. director, warned that a rise in adolescent suicides would be one of the “substantial public health negative consequences” of school closings. Mental health groups and researchers released reports and resources to help schools, which provide counseling and other intervention services, reach students virtually. Mental health advocacy groups warned that the student demographics at the most risk for mental health declines before the pandemic — such as Black children and L.G.B.T.Q. students — were among those most marginalized by the school closures.

But given the politically charged atmosphere this summer, many of those warnings were dismissed as scare tactics. Parents of students who have taken their lives say connecting suicide to school closings became almost taboo.

A video that Brad Hunstable made in April, two days after he buried his 12-year-old son, Hayden, in their hometown Aledo, Texas, went viral after he proclaimed, “My son died from the coronavirus.” But, he added, “not in the way you think.”

In a recent interview, Mr. Hunstable spoke of the challenges his son faced during the lockdown — he missed friends and football, and had become consumed by the video game Fortnite. He hanged himself four days before his 13th birthday.

Hayden’s story is now the subject of a short documentary, “Almost 13,” Mr. Hunstable’s video has more than 100 million views, and an organization created in his son’s name has drawn attention from parents across the country, clearly striking a chord.

“I wasn’t trying to make a political statement,” Mr. Hunstable said. “I was trying to help save lives.”

This fall, when most school districts decided not to reopen, more parents began to speak out. The parents of a 14-year-old boy in Maryland who killed himself in October described how their son “gave up” after his district decided not to return in the fall. In December, an 11-year-old boy in Sacramento shot himself during his Zoom class. Weeks later, the father of a teenager in Maine attributed his son’s suicide to the isolation of the pandemic.

“We knew he was upset because he was no longer able to participate in his school activities, football,” Jay Smith told a local television station. “We never guessed it was this bad.”

President Biden has laid out a robust plan to speed vaccinations, expand coronavirus testing and spend billions of dollars to help districts reopen most of their schools in his first 100 days in office.

By then, children in districts like Clark County, with more than 300,000 students, will have been out of school for more than a year.

“Every day, it feels like we have run out time,” Dr. Jara said.

Heading into the pandemic, youth suicide rates had been on the rise for a decade; by 2018, suicide had become the second-leading cause of death for youth and young adults, behind accidents. And the most recent behavioral risk survey, which was released last year by the C.D.C. and tracks health trends of high school students, shows a steady rise over the last decade in the percentage of students who say they felt persistent feelings of sadness or hopelessness, as well as in those who planned and tried suicide.

Since the lockdowns, districts are reporting suicide clusters, Dr. Massetti of the C.D.C. said, and many said they were struggling to connect students with services.

“Without in-person instruction, there is a gap that is right now being unfilled,” she said.

Suzie Button, the senior clinical director for high school programming at the Jed Foundation, a nonprofit based in New York that works on suicide prevention, said hundreds of schools and colleges — including Clark County’s — are teaming up with the organization to better serve students during the pandemic.

“There’s a lot we don’t know, but what we do know about schools is they are the nexus of adolescent life,” Dr. Button said. “And in times like this, young people are sometimes the canaries in the coal mine.”

Like many school districts, the Clark County school system marshaled its resources to plug gaps in services to its students. Truancy officers started doing wellness checks, school psychologists were working overtime, teachers were trained to look for trauma cues on screens, and school resource officers became the chief liaisons between the district and the coroner’s office.

By July, after the sixth suicide since March, the district invested in a program, the GoGuardian Beacon alert system, to send reports of mild to severe suicide risk. The system, which scans student writings on district-issued iPads, generated more than 3,100 alerts from June to October, indicating behavior such as suicide research, self-harm, written comments, or just the need for help or support.

By November, the deluge forced the district to upgrade its contract to include 24-hour monitoring and a service that would sort out the most severe cases, like students who were in “active planning,” meaning they had identified a methodology and were ready to act.

“I couldn’t sleep with my phone nearby anymore,” Dr. Jara said. “It was like a 24-hour reminder that we need to get our schools open.”

Recent graduates have also been affected.

Anthony Orr, 18, drove his car to a parking lot in August and shot himself with an AR-15 he had bought two weeks before. In the months since, his parents, Marc and Pamela, have looked for signs they may have missed. His father did not know anything was wrong until he found his son’s body in the car, grabbed his arm and asked, “Son, what have you done?”

The teenager, whose brother is a teacher in the district, seemed happy — he had graduated a couple of months before, decided that he wanted to take up a trade instead of going to college, and was settling in at his new job where he had made friends. The only disappointment he had expressed was that his senior year was disrupted and that prom and his sports seasons were canceled.

But he had met his goal to graduate with advanced honors, and he wore a white gown to a socially distanced, scaled-back ceremony that noted the achievement.

“That was a letdown for him, too. There wasn’t the pomp and circumstance,” his father said. “They did it nice, they got to run across the stage and get the paper, but it definitely took away from the party.”

The latest on how the pandemic is reshaping education.