The search for the insurrectionists who stormed the U.S. Capitol last month isn’t your typical FBI manhunt.

Usually, when the FBI asks the public for help identifying someone photographed committing a federal crime, they’re focused on one person, maybe two. They probably know the general area where the suspect lives and can focus their efforts on that region accordingly. If they want a little more publicity ― say, for a serial bank robber ― they’ll give them a catchy nickname that will generate more headlines, public interest and social media discussion.

But the deadly Jan. 6 attack on the U.S. Capitol, carried out by supporters of former President Donald Trump who believed his lies about mass voter fraud, isn’t a standard FBI investigation. Instead of one or two bank robbers, the FBI is seeking to identify hundreds of suspects who flooded into the Capitol on Trump’s behalf.

The FBI has already identified and charged defendants you might call “low-hanging fruit” ― the most high-profile insurrectionists whose unique look or social media presence made them relatively easy to identify. And the agency is still sorting through literally hundreds of thousands of tips it received in the aftermath of the Capitol attack.

Now investigators want to make sure the public keeps paying attention after the initial wave of media coverage around the Capitol attack has calmed. There are still a ton of suspects with photos on the FBI’s website who have yet to be identified. The agency needs to get and keep eyeballs on the new images it’s publishing. And that’s caused the bureau to rethink and reassess its standard approach.

“We haven’t had an investigation to this scale and scope where we needed to identify this many individuals,” Samantha Shero, a spokesperson for the FBI’s field office in Washington, told HuffPost. “The way that we typically would release ‘seeking information’ photos or individual photos was not sustainable.”

So they’re changing things up a bit. The U.S. Capitol Violence landing page on the FBI’s website got a refresh earlier this month. Gone are the PDFs that compiled images of 10 different suspects on a single page, the posters sometimes referred to as “BOLOs” (for “Be On The Lookout). Now the page features more than 300 downloadable, higher-quality images of more than 200 suspects. Nearly 40 suspects have been labeled as arrested.

“In this new method and this new website, we’re able to push them out quick,” Shero said. “We’re able to push out various angles and different views that typically our ‘seeking information’ posters didn’t include.” 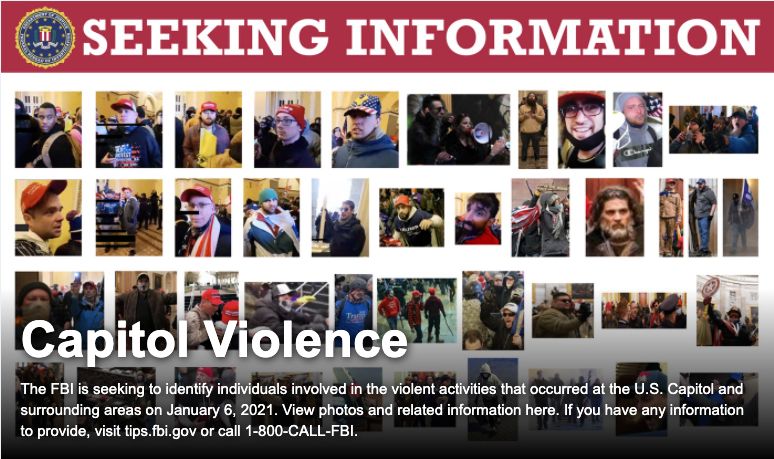 Because Trump’s effort to stop the certification of the Electoral College vote drew supporters from all across the country, the bureau can’t just target one particular region where a suspect is thought to live. (There are also, of course, some advantages to how the rioters behaved: Bank robbers don’t typically write Facebook posts bragging about how they just robbed a bank.)

“Because all these individuals came to D.C. and then dispersed across the country, that adds to the complexity of it,” Shero said. “So having all the other FBI field offices help us out by tweeting out these pictures and putting them on Facebook is really necessary, because we know these people are not in D.C.” 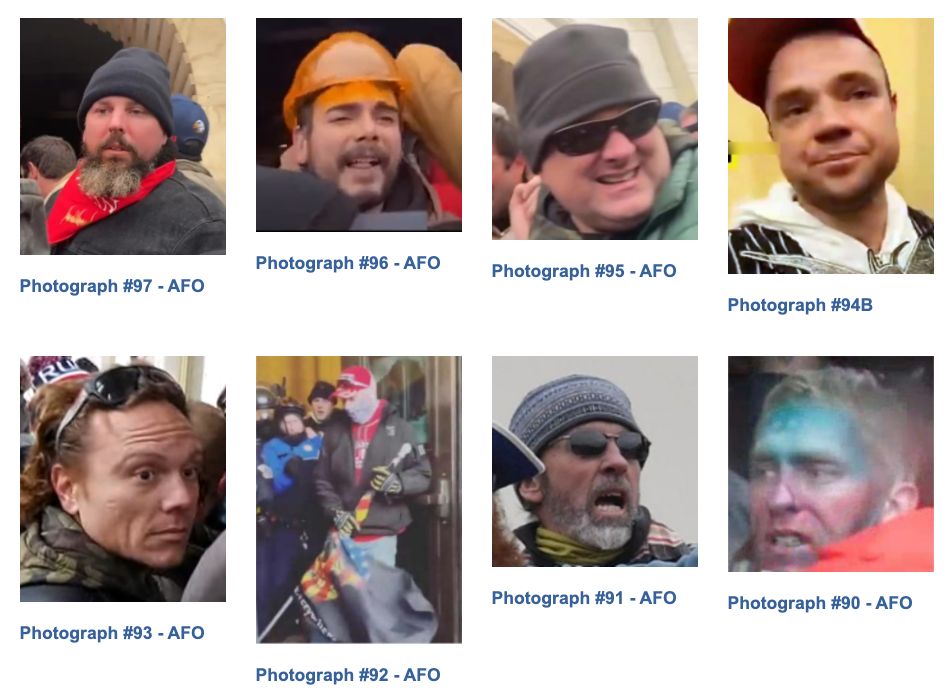 Despite its cultural reputation as a state-of-the-art crime-fighting operation, the FBI is still a massive bureaucracy that isn’t always working with the most cutting-edge technology. Unlike the online sleuths working to hunt down insurrectionists captured committing crimes at the Capitol, the bureau hasn’t published videos of suspects’ actions during the attack directly.

But online sleuths ― who have published and disseminated footage from a wide range of livestreams and other social media posts ―are monitoring and building off of the FBI’s database, and the bureau knows how critical the public’s work has been in the cases they’ve brought so far.

“It’s clear through the arrests we’ve already made that the public has been crucial in identifying these people, so putting these pictures out on social media has definitely helped get a further reach,” Shero said. “Since these people are everywhere, certainly social media has helped to spread that more widely.”

And because it wouldn’t be a federal investigation without acronyms, the FBI is labeling suspects wanted in connection with an assault on a federal officer as “AFO” and those wanted for assault on media as “AOM.” 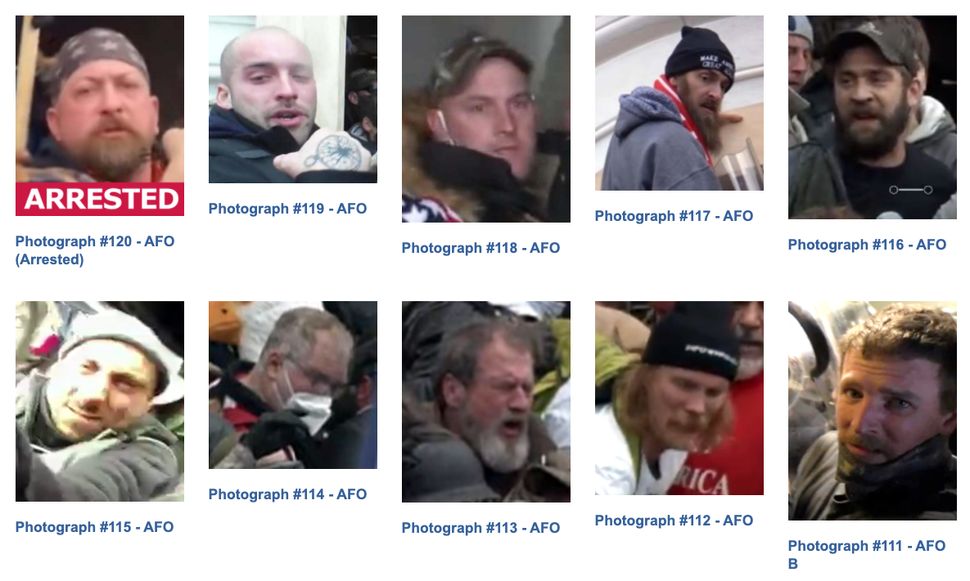 The FBI nicknames sometimes mock criminals’ dumb mistakes: One was nicknamed “Spelling Bee Bandit” because he dropped a “b” from “robbery” on his notes demanding cash from bank tellers.

Because of the sheer number of defendants being targeted, the FBI hasn’t chosen to give nicknames to any Capitol insurrectionists yet. But online sleuths have stepped into the void, often organizing their efforts around nicknames that become hashtags.

Rachel Powell, the Pennsylvania mother of eight seen swinging a pipe in the Capitol building and giving other insurrections instructions over a megaphone, was referred to as “Bullhorn Lady” or “Pink Hat Lady” by online sleuths who helped track her down.

@SeditionHunters is one of the groups giving Capitol suspects nicknames. Recent additions include “Bandana Wolverine” for a middle-aged man in a leather jacket and a bandana who looks in need of a shave, and “Tricorn Traitor” for a man in an old-fashioned hat (that’s the type of nickname the feds couldn’t deploy themselves without running into trouble with a judge down the line).

A person who identified themselves as @SeditionHunters’ administrator told HuffPost that the group is made up of 27 individuals “who work together on a private Discord platform to gather images and videos on persons of interest wanted by the FBI and MPD as well as others who may have committed crimes” at the U.S. Capitol. Nicknames also make their jobs easier, they said.

“Unique hashtags help to engage others in our search as well as making it easier for us to track specific individuals,” they said. “They help the online community visualize the person or the alleged crime committed or the weapon used and then share information quickly related to that specific individual.”

The @SeditionHunters administrator emphasized the “collaborative nature” of the work and said that “people from all walks of life” were working to help hold the perpetrators of the attack accountable.

“Some create complex composites of individuals, some create dramatic videos of the crimes committed, while others share images across all social media platforms,” they said. “Each is incredibly valuable in their contribution.”

The FBI agrees and is hoping that public help keeps rolling in.

“The tips have been crucial,” the FBI’s Shero said. “We hope that they’ll continue to do that even with new photos as this keeps going on.”