Home » Politics » There’s A Real Gun Show For Kids Like ‘Kinder-Guardians,’ And It’s Made By The NRA

The pilot episode of Sacha Baron Cohen’s “Who Is America?” makes a fool out of gun rights organizations and members of Congress, getting them to read off a teleprompter in support of arming toddlers and schoolchildren. There’s even an episode of a fake children’s show called “Kinder-Guardians,” during which Philip Van Cleave, president of the Virginia Citizens Defense League, holds up various guns reimagined as children’s toys and teaches viewers how to use them.

“To feed him, take his ‘lunch box’ and push it into his tummy, like this,” Van Cleave says, loading a magazine into a pistol. “Just remember to point Puppy Pistol’s mouth right at the middle of the bad man. If he has a big fat tummy, point at that.”

This is played as a series of mounting absurdities, the joke being that some Americans are so committed to their maximalist vision of gun rights that they can’t recognize an obvious satire unfolding around them. A kids show! Promoting guns!

Would you like to hear a funnier joke? A kids show promoting guns already exists.

Let me introduce you to Eddie Eagle. Eddie is the lead mascot among five avian friends ― including Fiona Falcon, Gary Goose, the Spanish-speaking Maya Guacamaya and Howie Hummingbird ― used by the National Rifle Association to teach gun safety to children at home and at school. Born in 1988, the anthropomorphic, jersey-clad bald eagle is the brainchild of Marion Hammer, former NRA president and creator of the country’s first Stand Your Ground law. Eddie’s featured in coloring books, crosswords and school curriculum, and if you’re in law enforcement, you can get your hands on a full-size costume and visit a school in character.

Eddie can also be found in a gun cartoon aimed at schoolchildren from kindergarten to fourth grade. The NRA has been pushing to get him into classrooms for 30 years.

None of this Eddie material is as overtly sinister as “Kinder-Guardians”; it doesn’t directly promote gun use or ownership among children. But it doesn’t have to. The NRA’s other properties already host live-fire events for kids, and they’ve encouraged parents to keep guns in kids’ rooms and rewritten a few children’s stories, like “Little Red Riding Hood,” to include guns. 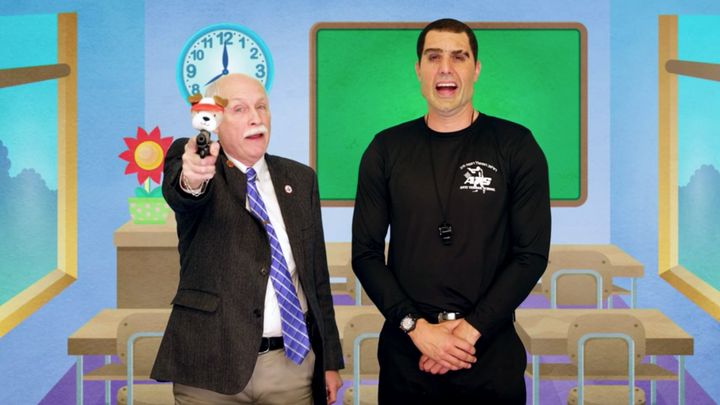 But both programs are set in a world that has acquiesced entirely to the presence of guns in the lives of children. In one video, Eddie Eagle and his bird buddies find a handgun at a basketball court in a park. Eddie launches into song, warning that touching a random gun isn’t a good idea: “Stop! Don’t touch! Run away, tell a grown-up,” he sings.

Throughout the eight-minute short, Eddie and friends bounce between gun safety catchphrases, justifications for gun ownership and tone-deaf nods to the youth.

“My mom always told me I should never touch a gun if I saw one. Next time, I’ll remember. And look great doin’ it!” says Fiona Falcon, to which Maya Guacamaya replies, “Like a true fashionista!” They wag their fingers back and forth and yell in unison, “Haaaaaayyyyy!”

“You might find a gun in a few different places. In houses; with people who want to protect us; sometimes your mom or dad or another adult may have a gun; and sometimes a gun might turn up where you don’t expect. But no matter where you see a gun, what should you always remember? Eddie?”

In its own literature, the NRA repeatedly notes that it’s not trying to arm children in the Eddie Eagle age group:

The purpose of the Eddie Eagle Program isn’t to teach whether guns are good or bad, but rather to promote the protection and safety of children. The program makes no value judgments about firearms, and no firearms are ever used in the program. Like swimming pools, electrical outlets, matchbooks and household poison, they’re treated simply as a fact of everyday life. With firearms found in about half of all American households, it’s a stance that makes sense.

But for all the posturing about safety concerns, the program doesn’t seem to work very well. The NRA says Eddie Eagle is responsible for an unrelated study findings of an 80-percent drop in “fatal firearms accidents” since the late ’80s. Its website reads:

NRA feels that gun accident prevention programs such as Eddie Eagle are a significant factor in that decline. Second, we often receive letters from parents whose children have encountered guns in unsupervised situations and avoided an accident by doing exactly what Eddie Eagle had taught them.

But there’s some evidence that the videos don’t actually help.

As part of an ABC News investigation in 2014, schoolchildren were shown an Eddie Eagle safety video, and then were left alone in the classroom with guns. They were able to recite Eddie’s gun-safety motto, but when a gun lay in front of them, they played with it, even looking down the barrel.

As Splinter points out, a 2004 study by the American Academy of Pediatrics found that kids are great at reciting catchphrases but fail to translate those jingles into real-life skills.

Children “know what to say, not what to do,” Marjorie Sanfilippo, a psychology professor at Eckerd College who researches children and gun violence, told Splinter. “We know they can recite the words, but you’re fighting an uphill battle.”

It’s not that you need a computer-generated eagle to tell you that guns are killing children, anyway. According to research published by the same Academy of Pediatrics in 2017, gun violence in the United States killed 1,287 children and adolescents each year between 2012 and 2014, while another 5,790 were taken to hospitals with gunshot wounds. As the Los Angeles Times put it last year: “In the United States, a gun is the cause of death in more than 1 in 10 deaths of people under the age of 18.” And that doesn’t account for more than 200 shootings on school campuses since 2015.

Eddie Eagle isn’t going anywhere. HuffPost reporters saw Eddie Eagle booths at both the NRA convention in May and the National Sheriff’s Association Conference in June, peddling reading material and DVDs to law enforcement officers and their children; Eddie reached 30 million kids last year, according to the NRA website, and 30 costumes were ordered by law enforcement agencies nationwide. Some state legislators have tried to pass bills making Eddie Eagle curriculum mandatory in schools.

The NRA didn’t immediately respond to calls for comment for this story. Workers at the Eddie Eagle booth at the NSA conference declined to comment.