Prime Minister Theresa May has lambasted President Donald Trump for saying a group of “Progressive’ Democrat Congresswomen” should “go back” to their countries, describing the remarks as “completely unacceptable.”

Trumptweeted on Sunday morning asking the “‘Progressive’ Democrat Congresswomen” — widely-interpreted as a reference to US Representatives Alexandria Ocasio-Cortez, Rashida Tlaib, Ayanna Pressley, and Ilhan Omar — to “go back” to their “corrupt” and “broken and crime infested” countries.

The president claimed the congresswomen were “loudly […] and viciously telling the people of the United States […] how our government is to be run.”

Trump suggested that the congresswomen, who hesuggested “originally came from countries whose governments are a complete and total catastrophe, the worst, most corrupt and inept anywhere in the world (if they even have a functioning government at all),” should “go back and help fix” the “places from which they came.”

A spokesperson for UK Prime Minister May on Monday said: “The prime minister’s view is that the language used to refer to these women was completely unacceptable.”

The response represents May’s strongest criticism of Trump yet, and comes after the president was last week dubbed “disrespectful and wrong” by the UK Foreign Secretary for describing her handling of Brexit negotiations “foolish” and a disaster.”

There is growing tension between Washington and London after leaked memos published last week showed the UK’s ambassador to the US, Sir Kim Darroch, criticising the Trump administration.

Read more:Boris Johnson’s plans for a Brexit trade deal with Trump are ‘in breach of European law’ warns Trade Secretary

In the notes, the UK ambassador to the US said that Trump’s government was “uniquely dysfunctional” and added: “We don’t really believe this administration is going to become substantially more normal.

He also described Trump’s presidency as “dysfunctional,” “incompetent,” and “inept.”

Darroch quit after Trump described him as a “very stupid guy” and a “pompous fool” and said he would not work with him in the future.

What were Trump’s tweets about?

Pelositold The New York Times that Ocasio-Cortez and the other freshmen. “didn’t have any following.”

Trump doubled down on Monday, tweeting: “When will the Radical Left Congresswomen apologize to our Country, the people of Israel and even to the Office of the President, for the foul language they have used, and the terrible things they have said. So many people are angry at them & their horrible & disgusting actions!” 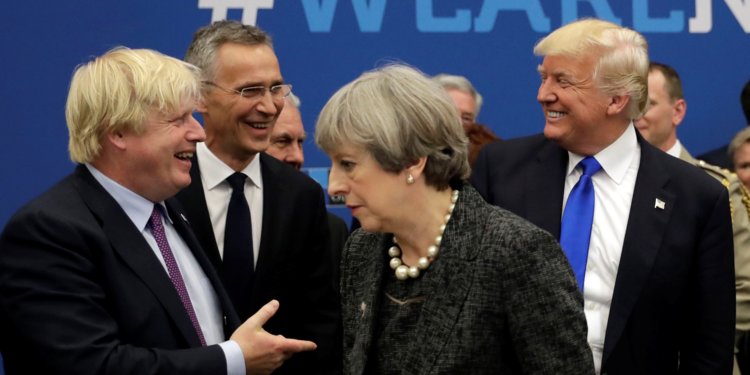 May’s condemnation of Trump is her strongest yet and marks the end of a relationship which she spent much of her premiership attempting to nurture.

Her decision, early in her term, to invite the president for a state visit to the UK was criticised heavily by political opponents at the time. However, with the UK’s exit from the EU approaching, May judged that forging a close relationship with the then new US administration, was crucial to finding a new role for the UK in the world.

Against the advice of some around her, May pushed ahead, laying on the full regalia of a state visit for Trump, including a banquet at Buckingham Palace.

Her efforts went largely unrewarded. Throughout his term, Trump made repeated criticisms of May’s handling of Brexit negotiations as well as a series of unwanted interventions in British diplomacy.

Read more:Boris Johnson called a ‘Donald Trump patsy’ after throwing the UK’s ambassador to US ‘under a bus’

Read more:Trump changes his mind about Kim Darroch after reading that the ambassador compared him to the Terminator

His support for the current Brexit Party leader Nigel Farage, to become the UK’s new ambassador to the US, was rebuffed by May, and his later public attacks on Darroch created a major diplomatic crisis between the two countries.

It all culminated im Trumplast week labelling her “foolish” and her handling of Brexit a “mess,” with May’s condemnation today an apparent belated reply.

May’s likely replacement as prime minister, Boris Johnson, is similarly determined to forge a closer relationship with Trump, and has beensimilarly criticised for doing so.

Time will tell whether Johnson’s efforts to win over the president will be any more successful than May’s.