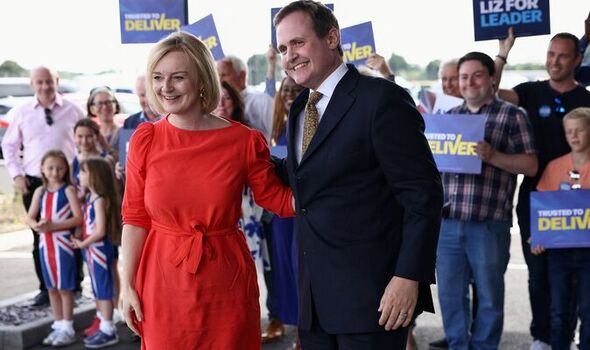 The former soldier, who also stood as a candidate to take over from Boris Johnson, gave his backing to Ms Truss in the Tory leadership race at the weekend. Mr Tugendhat said her promises of tax cuts are based on “true Conservative principles” and claimed that she can unite the party.

The Tonbridge and Malling MP, who chairs the Commons foreign affairs committee, was asked by reporters if he would like to be named foreign secretary in return for his support.

He said: “Well, look, it would be a fantastic job to do, let’s not pretend it wouldn’t.

“But the reality is, I’ve been promised nothing, I expect nothing. I hope for a lot, but I have no right to expect.”

Despite saying it was “extremely premature” to say whether she would appoint him Foreign Secretary, Ms Truss heaped praise on Mr Tugendhat’s stance over Russia and China.

Mr Tugendhat joined Ms Truss at an event at Biggin Hill Airport, Bromley, on Saturday as part of her campaign to be the next PM.

Polling also shows that Conservative members overwhelmingly want Kemi Badenoch, another former leadership hopeful, to have a job in the new Cabinet.

YouGov found that Ms Badenoch, who was knocked out of the race in the penultimate round of MPs’ votes, was the most popular choice for a role under Ms Truss or rival Rishi Sunak. In a survey of 730 members, 84 percent backed her.