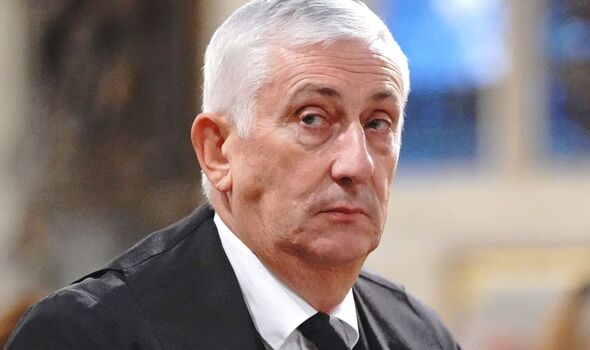 Sir Lindsay Hoyle has spoken of his disappointment in the Tory Party after months of governmental controversy and instability. The Commons Speaker agreed with the suggestion that the antics of the Conservative Party had made the UK an “international laughing stock”. Reflecting on the past year in politics, he described the Tory leadership as a “disaster” which had threatened to break people’s trust in politics. Highlighting the “revolving door” of senior politicians after swathes of party members resigned, Sir Lindsay suggested he was forced to become the only aspect of “continuity” of Parliament.

Speaking to BBC Radio 4 PM, Sir Hoyle explained: “It was like a revolving door of ministers.

“I’ve never seen anything like it – it was bizarre.

“We never knew who was going to be at the dispatch box.

“The only continuity of Parliament was myself – we were running out of ministers.”

His comments come after Parliament experienced months of turbulence, initially sparked by the partygate revelations that some ministers had broken lockdown regulations.

As pressure mounted on then prime minister Boris Johnson to resign, a flood of Tory ministers, including some members of the leading Cabinet team, stepped down from their posts.

The fervent instability of government continued under Ms Truss as her short premiership was plagued by resignations among senior officials and characterised by her Cabinet’s disastrous mini-budget.

Sir Hoyle told BBC Radio 4: “Brexit divided the country, it divided families, and people’s respect for democracy has struggled. Of course, we didn’t help this year with what went on.”

He added: “Three prime ministers within three months – nobody could have envisioned it.”

Following the resignation of Ms Truss, Rishi Sunak, the runner-up in the summer leadership contest, became the new Prime Minister – marking him as the third prime minister in as many months.

The Speaker suggested the respected image of the Government “fell apart” amid the Tory chaos, which massively overshadowed “the biggest majority we’ve seen for [the] Conservatives”.

Don’t miss:
Jungle challenges, Three PMs and one permacrisis…12 days of politics [COMMENT]
Sunak blasted for ‘abdicating all responsibility’ of NHS strike action [REPORT]
‘Do-nothing’ Rishi is at risk of being yet another Tory casualty [ANALYSIS]

Sir Hoyle suggested the Conservative chaos had amplified existing political tensions which stemmed from the divisive nature of the Brexit decision.

He noted: “We’re still struggling to recover from Breixt, that’s part of our problem.

“It divided families. There was real division there and we’ve been trying to heal that.”

Looking back on the tumultuous year in politics, Sir Hoyle asserted he had “never ever seen anything like it before”.

Moving forward, he called for “better respect and better tolerance” among MPs to reaffirm the public’s faith in the political system.

Read next:
Jacob Rees-Mogg almost ran for leader and may still make a bid
Rishi Sunak given 2023 deadline to fix migrant crisis
Sunak supporters are ‘rattled’ by new Tory democracy movement
Brexit fury as UK accused of ‘taking knee’ to EU over hated deal
Sunak asks homeless man if he works in finance