Advocates pushed the vice president to end Title 42, a Trump-era rule that allows the government to expel migrants for public health reasons. 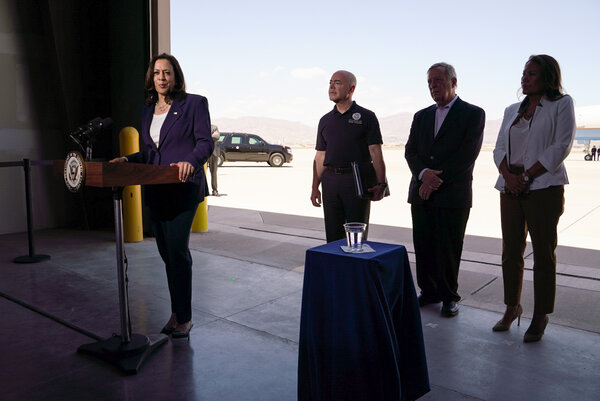 WASHINGTON — Vice President Kamala Harris on Friday made her first visit to the southern border since she took office, hitting back at Republican criticism and meeting with advocates who pushed her on why the Biden administration had not yet ended restrictive Trump-era policies on migration.

“We can take all of these perspectives into account and have meaningful good public policy if we just stop the rhetoric,” Ms. Harris told reporters after a four-hour visit to El Paso. “You can’t just react to a problem without solving it at its roots. Let’s just agree to that.”

During her trip, she confronted an issue that has bedeviled the administration for months and is now tied to her own political future after President Biden put her in charge of addressing the root causes of migration. But for all of the questions she took from reporters, immigration advocates and even a group of detained migrant children — whom she met behind closed doors — the vice president had few answers.

In one private meeting, she heard from immigration advocates who said they did not understand why the Biden administration had yet to deliver on promises to roll back Trump-era policies like Title 42. Several pressed Ms. Harris to end that rule, which allows the government to expel migrants, including asylum seekers, for public health reasons.

“We were very forceful about that,” Fernando García, the executive director of the Border Network for Human Rights, who attended the meeting, said in an interview. “She asked how we think it could happen. She was looking for some answers.”

The Biden administration is working to phase out Title 42, but on Friday, Alejandro N. Mayorkas, the secretary of homeland security who accompanied Ms. Harris to El Paso, told reporters that the Centers for Disease Control and Prevention would ultimately decide.

“It’s a public health decision,” Mr. Mayorkas said. “It’s based on the well-being of the American public.”