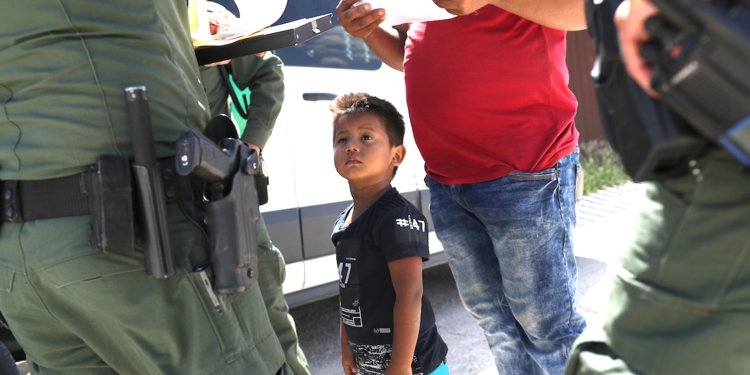 A boy and father from Honduras are taken into custody by U.S. Border Patrol agents near the U.S.-Mexico Border on June 12, 2018 near Mission, Texas.
John Moore/Getty Images


The Trump administration said in a court filing Tuesday that it was on track to reunite 38 young immigrant children who were forcibly separated from their parents at the US-Mexico border — though dozens more would need more time.

A federal judge had set Tuesday as the deadline for the government to reunite 102 children in its custody under the age of five, but the Trump administration provided a list of reasons that the remaining 64 children wouldn’t be reunited on time.

In one stunning example, the government listed one child who “cannot be reunified at this time because the parent’s location has been unknown for more than a year,” and “records show the parent and child might be US citizens.”

The court filing didn’t clarify the circumstances of that child’s separation or why it occurred so long ago. The majority of the family separations took place in recent months after the Trump administration implemented its “zero tolerance” policy to criminally prosecute adults who cross the border illegally.

The Health and Human Services department told Business Insider in a statement that it wouldn’t comment on specific cases of young immigrants in its custody.

Here’s what’s happening with the remaining 101 children under the age of five: