WEST DES MOINES, Iowa (Reuters) – More than a year before the 2020 U.S. presidential election, President Donald Trump and former Vice President Joe Biden went toe-to-toe in Iowa on Tuesday, trading barbs, testing their messages and providing a glimpse of a potential matchup between the two.

Trump and Biden, the Democratic front-runner, were in Iowa on the same day for the first time during the presidential race. Biden held a series of campaign stops in the state, which will hold the first nominating contest for Democrats next February. Trump appeared at an event promoting biofuels and then spoke at a state Republican Party fundraiser.

“We didn’t plan it this way,” Biden joked at one event.

But there was little levity between the two men throughout the day. Just four years apart in age, they exhibited dramatically different political styles.

As has long been his approach, Trump, 72, early in the day belittled a potential opponent with a series of insults, mocking Biden’s age, appearance and intelligence, and calling him a “loser.”

Biden, 76, hit back, but in a more restrained way, preferring to focus on Trump’s actions as president. At a stop in Ottumwa, he referred to Trump as “a threat to our core values.”

The exchanges illustrated the challenge Trump poses for Biden. Rather than focusing on any single policy issue, Biden’s campaign is centered on the notion of a return to public decency and political modesty. Much of his stump speech is devoted to what he terms national values.

“We have to be a lot more civil in the way we engage one another,” Biden told reporters in Mount Pleasant. “The system isn’t broken. The politics are broken.”

Trump takes a much more aggressive political approach. He has remade the nature of the presidency in his own fashion, using social media with a characteristic bluntness, challenging longtime U.S. allies and questioning Washington traditions once viewed as sacrosanct.

On the campaign trail, Biden often says he views Trump’s first term as president as an “aberration.” A second term, he warns, “will fundamentally change who we are as a nation.”

Biden seems to worry out loud that might already be occurring.

“Some say this is an old-fashioned way of doing things,” he said in Ottumwa. “If it’s old fashioned … we’re in real trouble.” 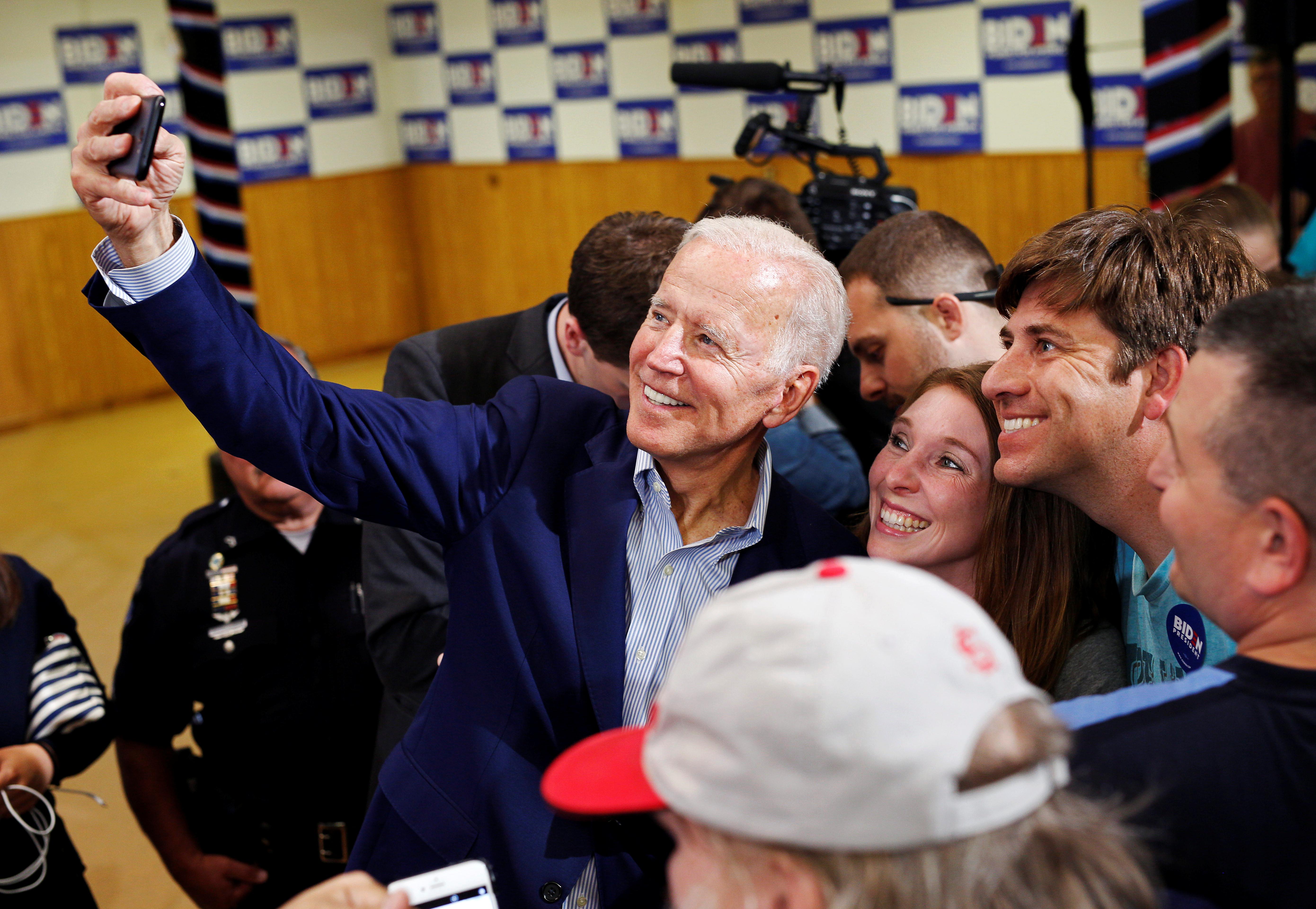 Unlike his Democratic rivals, who routinely blast Republicans as Trump lackeys, Biden expresses nostalgia for the

Republican Party that existed before Trump arrived. “It would be nice if they start to vote like they used to,” Biden said at an event last week in New Hampshire.

But at a Republican fundraiser in West Des Moines on Tuesday night, the president received a fervent welcome, suggesting his near-absolute grip on the party.

“We are going to show this president that we believe in him and we love him,” said the chair of the Iowa Republican Party, Jeff Kaufmann.

Trump demonstrated why he will likely be a formidable candidate next year, focusing his remarks at the event on the strong U.S. economy and talking up his recent deal with Mexico on migration. He notably did not mention Biden by name and touted his administration’s record.

“We’ve turned it all around,” he said.

Iowa will serve as a key battleground in the November 2020 election, a swing state that went for Trump on 2016 but for Democrat Barack Obama the two previous elections.

Trump has long been running for re-election, but will hold an official kickoff event next week in Florida. No Republican has challenged him for his party’s nomination.

Before Biden can win the Democratic nomination to face him next year, he must solidify his support in Iowa.

An statewide Des Moines Register/CNN/Mediacom poll released last week showed Biden with 24 percent of the vote among Democrats in the state, a lower level of support than he has shown in other early states. Close behind were U.S. Senators Bernie Sanders and Elizabeth Warren and Pete Buttigieg, the mayor of South Bend, Indiana.

In a head-to-head fight, Biden, who has a history of strong union support, would be competing with Trump for the same white, working-class voters in Iowa and elsewhere who helped Trump win the 2016 election. 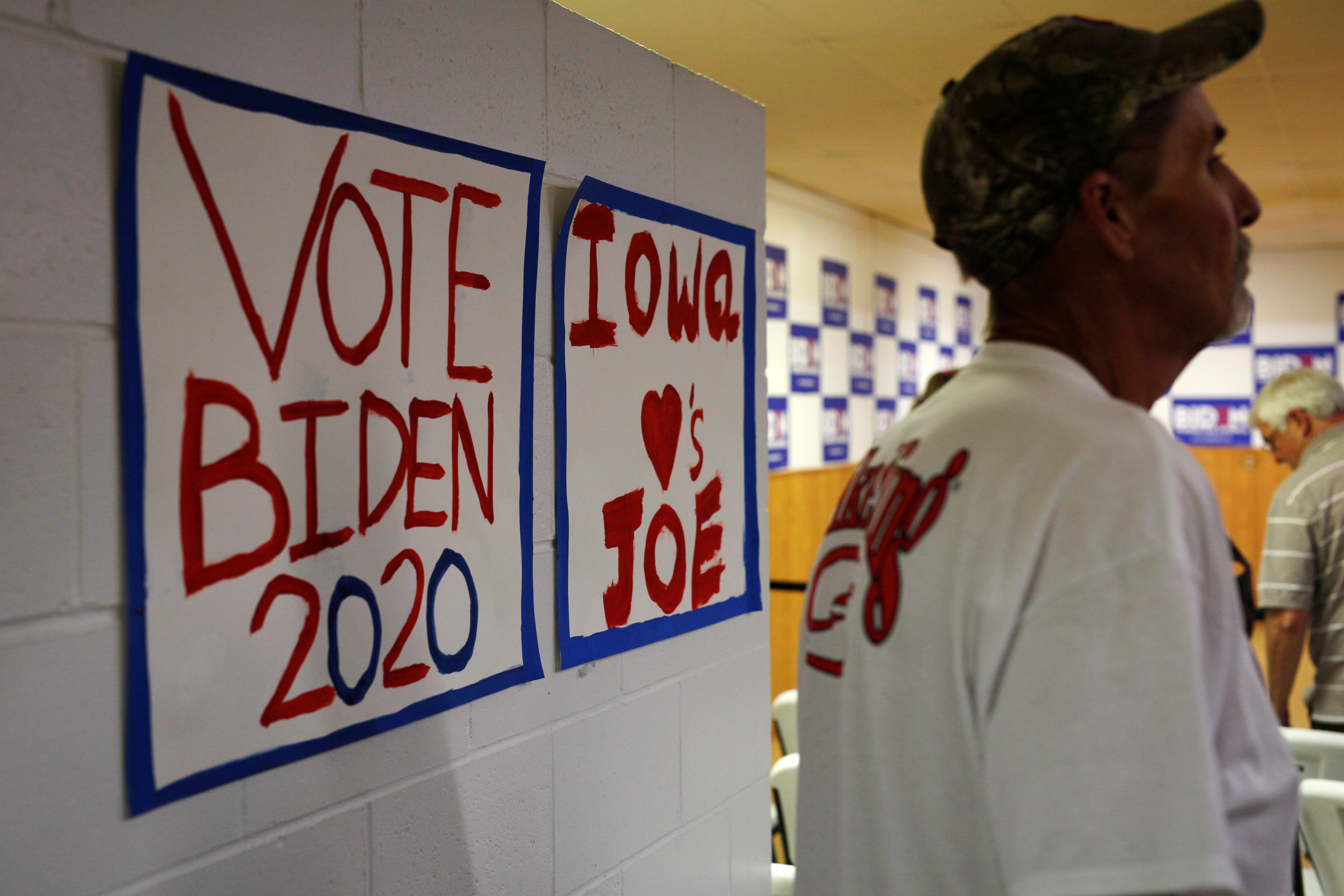 Farmers in Iowa and elsewhere, a key Trump constituency, have been hit particularly hard by Trump’s 10-month tariff war with China.

Biden made a direct appeal to them on Tuesday.

“It’s really easy to be tough when someone else absorbs the pain,” he said.