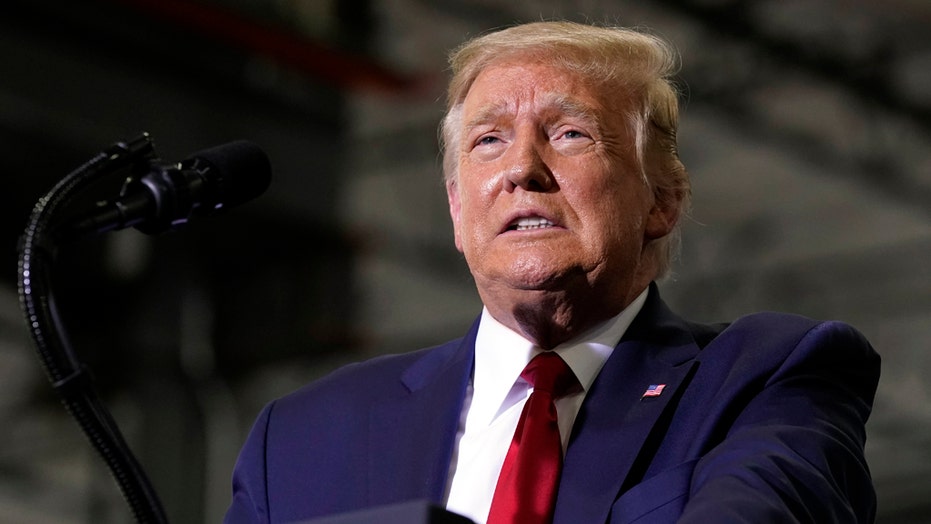 President Trump's campaign denied a report that he sexually assaulted a former model at the U.S. Open tennis tournament in 1997, an allegation that was reported Thursday by The Guardian.

Amy Dorris accused Trump of approaching her outside the bathroom in a box at the event, grabbing her, "assaulting her all over her body" and sticking his tongue down her throat, according to The Guardian. The publication reported that Dorris felt "sick" and "violated" after the alleged assault.

"The allegations are totally false," Trump campaign legal advisor Jenna Ellis said in a statement. "We will consider every legal means available to hold The Guardian accountable for its malicious publication of this unsubstantiated story. This is just another pathetic attempt to attack President Trump right before the election."

Trump has been accused of sexual assault on multiple occasions by other women, and he has forcefully denied those allegations too. In a video released in 2016, Trump famously bragged about being able to sexually assault women during a conversation with Access Hollywood host Billy Bush.

The Guardian published several photos of Dorris with Trump around the time of the alleged assault — in public with others. It also reported that several others said Dorris previously told them about the alleged assault, including her mother and a friend in New York. But the publication reported that Trump's lawyers said Dorris' alleged encounter would have been seen by many people in the U.S. Open box. Dorris alleged the assault happened behind a partition that largely hid it from the view of others.

Dorris claimed to The Guardian that she told her then-boyfriend Jason Binn she was uncomfortable with Trump's advances. Binn did not speak with The Guardian, but it reported that Trump's lawyers said they spoke with him and he had no recollection of Dorris complaining about Trump.

The latest allegation against Trump comes as Democrats are largely framing the 2020 election as a battle between an amoral Trump and an upstanding Joe Biden. Biden has called the election "a battle for the soul of the nation." Trump has been accused of sexual assault by at least 25 women, according to Business Insider.

The president is currently embroiled in a lawsuit against a woman named E. Jean Carroll who is suing him personally for defamation. She accused the president of raping her in the 1990's. He has denied the claim.

Carroll is attempting to get a DNA sample from the president as potential evidence and to have him answer questions under oath. The Department of Justice this month moved to intervene and defend Trump in the lawsuit, claiming that Trump was operating in his role as president when he denied Carroll's allegations.

Biden has also been accused of sexual assault by a woman named Tara Reade. The former Biden Senate staffer said in March that Biden assaulted her in 1993, which was a change in her story from a previous version in which she accused Biden simply of inappropriate contact. Biden has denied Reade's allegation.