President Donald Trump’s press conference quickly unraveled on Tuesday as he struggled to defend a video he’d retweeted that is full of false claims about the coronavirus and complained about his low approval rating.

Reporters asked Trump repeated questions about his continued support for hydroxychloroquine as a COVID-19 treatment a day after he retweeted several conspiracy theories about the drug. Multiple clinical trials have found hydroxychloroquine is not an effective coronavirus treatment, despite the president’s suggestions to the contrary.

“Many doctors think it is extremely successful,” Trump claimed when asked about the retweets, adding, “I happen to believe in it. I would take it. As you know, I took it for a 14-day period, and I’m here. … It’s safe. It doesn’t cause problems.”

Trump was also forced to answer for a video he retweeted on Monday that showed a group of self-proclaimed medical experts claiming that social distancing and masks were not necessary to curb the spread of COVID-19 and alleging that officials were suppressing the use of hydroxychloroquine for political reasons. The event was hosted and funded by the right-wing nonprofit Tea Party Patriots, which has been organizing projects to promote that narrative.

A reporter pointed out to Trump ― who’d just recently encouraged Americans to wear protective masks (in line with Dr. Anthony Fauci and other real experts in infectious diseases) ― that one of the main doctors featured in the video is a full-blown conspiracy theorist: “She’s also made videos saying that doctors make medicine using DNA from aliens and that they’re trying to create a vaccine to make you immune from becoming religious.”

The president all but shrugged his shoulders. 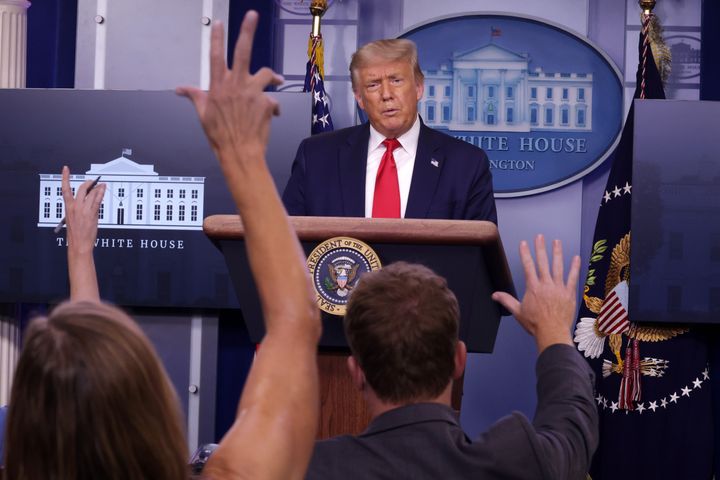 “She was on air, along with many other doctors,” Trump said. “They were big fans of hydroxychloroquine, and I thought she was very impressive. … She said that she’s had tremendous success with hundreds of different patients.”

In reality, studies have found that hydroxychloroquine, an anti-malarial drug, is not effective for COVID-19 treatment or prevention. After Trump began touting it in March, leading to panic-buying of the medication, the Food and Drug Administration had to post a caution against anyone using it to treat COVID-19 outside a hospital or clinical setting ― because it can trigger serious heart rhythm problems. The doctors speaking in the video presented no evidence of any patients they’ve successfully treated.

After fumbling through his answer about the video, Trump quickly walked off the podium, ending the briefing after less than 30 minutes. In the past, his coronavirus-related briefings have lasted for over an hour.

But the president appeared eager to wrap up the event on Tuesday, complaining several times that he was being unfairly maligned. At one point he suggested that health experts were not backing hydroxychloroquine to spite him.

“It doesn’t seem to be too popular,” Trump said of the drug. “You know why? Because I recommend it. When I recommend something, they like to say don’t use it.”

Trump, who typically maintains that he’s very well-liked by voters, also complained to reporters that Fauci, the country’s leading infectious disease expert who frequently contradicts Trump, is more popular than he is.

“They’re highly thought of,” he said of Fauci and Dr. Deborah Birx, who are both on the White House’s coronavirus task force. “But nobody likes me. It can only be my personality, that’s all.”