Former President Donald Trump endorsed Sarah Huckabee Sanders in her run for Arkansas governor on Monday night, saying she will “always fight” for the people of the state and “do what is right.”

Sanders served as Trump’s White House press secretary until June 2019. She joined the Fox News Channel as a paid, on-air contributor in September 2019. A Fox News Media spokesperson confirmed on Sunday that her contributor agreement with the network has been terminated.

“Sarah is strong on Borders, tough on Crime, and fully supports the Second Amendment and our great law enforcement officers,” Trump said in a statement.

“She loves our Military and Veterans — and her home state of Arkansas,” he continued. “Sarah will be a GREAT Governor, and she has my Complete and Total Endorsement!”

SARAH HUCKABEE SANDERS RUNNING FOR GOVERNOR OF ARKANSAS: WHAT TO KNOW 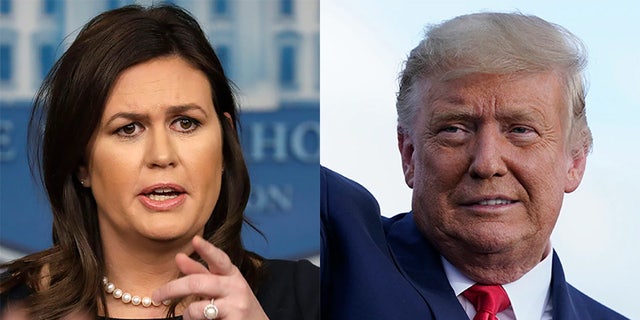 Sanders announced on a nearly eight-minute video that she will defend those in the state for their “right to be free of socialism and tyranny.”

“With your support, I hope to be the first woman to lead our state as governor,” she continued.

She was widely encouraged to run by Trump since her White House departure in June 2019.

“She is a very special person with extraordinary talents, who has done an incredible job!” Trump wrote as she was departing the White House. “I hope she decides to run for Governor of Arkansas – she would be fantastic.”

The daughter of former Arkansas Gov. Mike Huckabee, Sanders would create something of an Arkansas political dynasty should she win.

She seeks to replace current GOP Gov. Asa Hutchinson, who is barred by term limits from running for reelection next year.