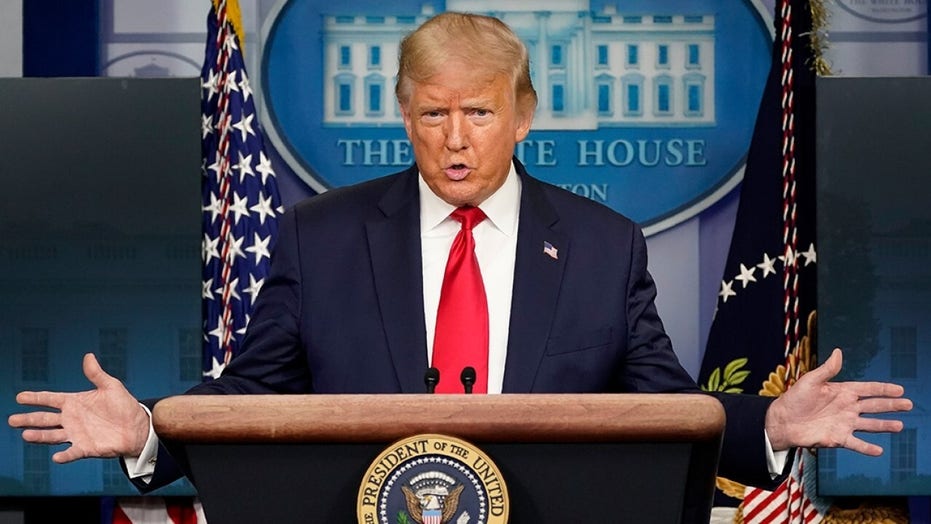 President Trump on guilty plea from Durham probe: Just the beginning, I would imagine

They spied on my campaign and they got caught, says President Trump at White House news conference.

President Trump said Friday the news that former FBI attorney Kevin Clinesmith will plead guilty to making a false statement is "just the beginning" of the fallout from U.S. Attorney John Durham's review of the Russia investigation.

"That's just the beginning, I would imagine. This… what happened should never happen again," Trump said at a White House briefing Friday afternoon. "You'll be hearing more."

Clinesmith was referred for potential prosecution by the Justice Department's inspector general's office over an altered email about former Trump campaign adviser Carter Page claiming he was "not a source" for another government agency. Page has said he was a source for the CIA.

The DOJ relied on that assertion as it submitted a third and final renewal application in 2017 to eavesdrop on Page under the Foreign Intelligence Surveillance Act.

Two sources close to the investigation told Fox News on Friday that Clinesmith will plead guilty.

"Kevin deeply regrets having altered the email. It was never his intent to mislead the court or his colleagues as he believed the information he relayed was accurate," Shur said in a statement.  "But Kevin understands what he did was wrong and accepts responsibility."

The Department of Justice charging document states the Clinesmith “did willfully and knowingly make and use a false writing and document, knowing the same to contain a materially false, fictitious, and fraudulent statement and entry in a matter before the jurisdiction of the executive branch and judicial branch of the Government of the United States.”

The charges say that Clinesmith altered another officials email to say that Page, was not a CIA "source," which had not be specified in the original email. Page was infact a CIA informant, which was ommitted in the 2017 FISA warrant.

Durham was appointed by Atttorney General Bill Barr in 2019 to investigate the FBI's origins of the Russia Probe.

“I said the American people need to know what actually happened, we need to get the story of what happened in 2016 and ’17 out. That will be done," Barr said in an interview with Fox News' "Hannity."

Adding that “if people crossed the line, if people involved in that activity violated criminal law, they will be charged.”

Trump has voiced his vested interest in the case saying that he hopes Durham will not be “politically correct" and added that Barr could go down in history as “the greatest attorney general” or just “an average guy," depending on the outcome of the investigation.

Democrats have voiced thier concerns that Barr will use his position as AG to go after Trumps "enemies."

In a recent podcast, House Intelligence Committee Chairman Adam Schiff, D-Calif, said Barr “may be using the power of the Justice Department through Durham or others to go after the president's enemies.”

The Associated Press, Brooke Singman and Bill Mears contributed to this report.