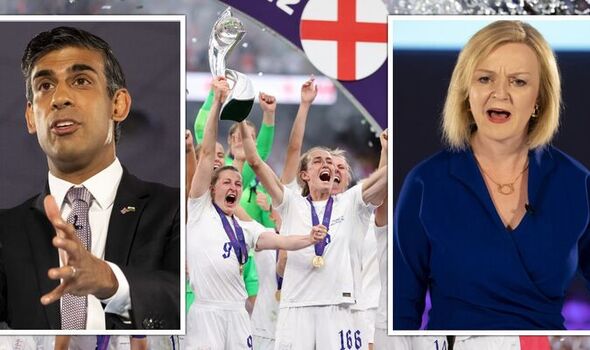 She made the pledge after the Euros winners appealed to her and Tory leadership rival Rishi Sunak to ensure all girls can play football in schools. Mr Sunak said he would “love to see” pupils getting at least two hours of PE and promised a review of women’s football.

The Lionesses said Britain should do better by girls in an open letter after they beat Germany 2-1 to lift the trophy at Wembley on Sunday.

They wrote: “Throughout the Euros, we as a team spoke about our legacy and goal to inspire a nation.

“Many will think that this has already been achieved, but we see this only as the beginning.

“Currently, only 63 per cent of girls can play football in PE lessons. The reality is we are inspiring young girls to play football, only for many to end up going to school and not being able to play.”

The letter asked the Tory leadership foes to ensure all girls get at least two hours a week of PE and to invest in – and support – women sports teachers.

They said: “This is an opportunity to make a huge difference. A change that will impact millions of young girls’ lives.”

A spokeswoman for Ms Truss said: “The team should be proud of their contribution and the path they have paved for the next generation of girls.

“Liz wants equal access to all sports for boys and girls.

“She is committed to investigating what prevents schools from delivering the recommended minimum of two hours’ PE per week.”

Mr Sunak’s spokesman said he wanted to use the Lionesses’ success to encourage more women and girls to play the beautiful game and “has also committed to launch a review of women’s football immediately”.