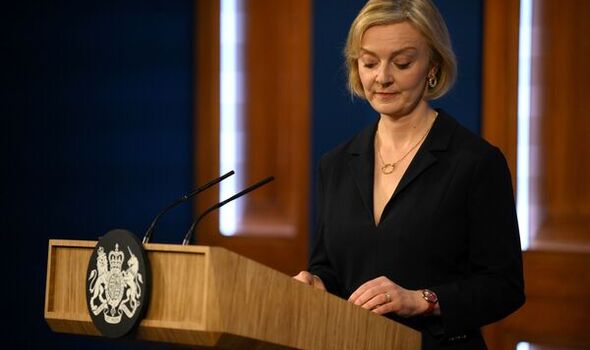 Brexiteer Tory MPs have welcomed the return of Boris Johnson’s Mr Fixit to the Downing Street operation as the Prime Minister sought to reassure them she would not abandon key policies. Liz Truss brought David Canzini with her when she addressed the influential European research Group (ERG) tonight as she attempted to shore up her position.

Mr Canzini has previously worked for election guru Sir Lynton Crosby’s C/T outfit and is known to be a ruthless operator and campaigner.

He was brought in early this year in a last ditch effort to save Boris Johnson as the Partygate scandal engulfed the government.

Allies of Ms Truss, who is desperately fighting for her political life after being forced to tear up her tax reforms and replace her Chancellor Kwasi Kwarteng with Jeremy Hunt.

The changes have been seen as a blow to Brexiteers in the party and a takeover by the Remainers.

But a senior member of the ERG told Express: “Seeing Mr Canzini there was a very positive sign. It gives us a lot of hope that things will settle again.”

An ally of Mr Canzini said: “DC has been brought back, by Mark Fullbrook, the chief of staff in Downing Street, to deliver.

“MF and DC have worked together for over a decade. Between them, they know the party better than anyone. MF asked for DC to join, with a view to bulking out the political operations.
MPs must be onside, or we face annihilation. DC will ensure they are given a voice.”

“The news has lifted spirits already – this is seen as a shrewd move by Liz Truss and MF.”

He said that Brexiteer MPs were “delighted” that she promised not to go soft on the Northern Ireland protocol.

Ms Truss also pleased her audience with a pledge not to reduce the promise of 3 percent of GDP spending on defence.

This comes as Defence Secretary Ben Wallace has reportedly threatened to quit over attempts by Chancellor Jeremy Hunt to slash defence spending.

It is understood that the question was put to the Prime Minister by Mr Francois, a former Armed Forces Minister and army officer.

The meeting was part of a series being carried out by the Prime Minister as Tory MPs plot to replace her with a new leader.

Last night Ms Truss had a warm reception of the other wing of the party in the One Nation group made up mostly of former Remainers.

However, her authority looks set to be undermined again with attempts by Mr Hunt to force a major reshuffle on her.