The national security adviser raised the issue of more penalties in the poisoning of Aleksei A. Navalny days after President Biden met with President Vladimir V. Putin of Russia. 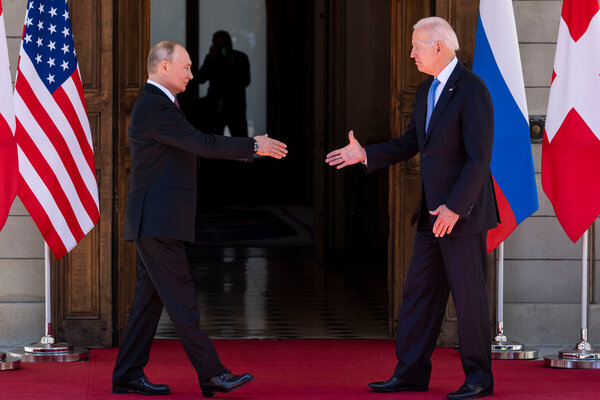 WASHINGTON — President Biden’s national security adviser said on Sunday that the United States was preparing more sanctions against Russia in response to the poisoning of Aleksei A. Navalny, the country’s most prominent opposition leader, days after Mr. Biden attended his first face-to-face summit meeting with President Vladimir V. Putin.

“We are preparing another package of sanctions to apply in this case,” Jake Sullivan, the national security adviser, said on CNN’s “State of the Union,” referring to Mr. Navalny’s treatment.

Mr. Sullivan was vague when pressed on the timing of the sanctions or what they would include, saying only that additional action would come “as soon as we develop the packages to ensure that we’re getting the right targets.”

“When we do that,” he said, “we will impose further sanctions with respect to chemical weapons.”

In April, the Biden administration imposed its first sanctions on Russia for the poisoning and imprisonment of Mr. Navalny. But those penalties were not specifically directed at Mr. Putin or the oligarchs who support him.

Jen Psaki, the White House press secretary, said there was no significance to the timing of Mr. Sullivan’s remarks. “The law requires we keep looking at sanctions targets connected to chemical weapons use,” she said, noting that there had been “no change from before the summit to after the summit.”

Mr. Biden and Mr. Putin both described their three-hour meeting in Geneva on Wednesday as positive, despite few concrete actions to come out of it other than an agreement to send ambassadors back to each other’s capitals.

After the meeting, Mr. Biden told reporters that he had been clear about consequences for Russia if Mr. Navalny, who in February was sentenced to more than two years in prison, were to die in captivity.

“I made it clear to him that I believe the consequences of that would be devastating for Russia,” Mr. Biden said.

“There has been no hostility,” Mr. Putin said in a separate news conference after the summit. “On the contrary, our meeting took place in a constructive spirit.”

Republicans have criticized the president’s handling of Russia, claiming that Mr. Biden displayed weakness in his meeting with Mr. Putin and noting that he had waived sanctions on the company behind Russia’s Nord Stream 2 pipeline, allowing it to be completed.

Mr. Sullivan pushed back on that characterization of the meeting, saying that the summit was “a study in contrast to what happened in Helsinki,” where President Donald J. Trump held his first face-to-face meeting with Mr. Putin in 2018 and dismissed the conclusions by U.S. intelligence agencies that Russia had interfered in the 2016 election.

“Privately in the room, President Biden communicated to President Putin that there would be costs and consequences if harmful activities against the United States continue,” Mr. Sullivan said on “Fox News Sunday,” adding that the United States had sent $150 million in security assistance to Ukraine a week before the summit.

“He entered and exited this summit in Geneva as the leader of the free world,” Mr. Sullivan said, “a mantle that Donald Trump had given away and that Joe Biden reclaimed on behalf of this country.”