About a year ago, Steve Smith stood outside a press conference at a hotel in Sacramento where Uber, Lyft and DoorDash announced plans to spend millions on a statewide ballot initiative that would exempt them from a state law requiring the gig economy companies to hire most of their independent contractors as employees. If the workers became employees, they would be entitled to benefits, paid leave, expense reimbursement, the right to collectively organize and other labor protections. Smith, who works for the California Labor Federation, wasn’t allowed in the room so he tried to listen through the door.

The gig economy giants were claiming that the ballot initiative contained provisions that would be good for drivers, including a guarantee that drivers would earn at least 120% of the state’s minimum wage for “all engaged time” — meaning when a paying passenger is in the car, for example. A Sacramento-based Uber driver standing next to Smith got out a pen and a piece of paper and started calculating how much he would actually make, factoring in the amount of time drivers typically spend waiting to get a passenger. He leaned over to Smith and said, “You know, that’s about $6 an hour, what they’re proposing — it’s actually less than I make right now. That’s how bad this thing is.” (Labor and economics experts at University of California, Berkeley, later confirmed the driver’s calculations.)

It was a “pivotal” moment for Smith, he said in an interview. It was clear to him that “every step of the way we’re going to be in lockstep with these drivers because they know, like nobody else, what this exploitation is all about.”

Since then, companies like Uber, Lyft, DoorDash, Postmates and Instacart have spent more than $185 million trying to convince voters to pass Prop 22. Their fight to deny workers basic protections is now the most expensive ballot initiative in the state’s history. For the companies funding the campaign, it’s a desperate measure to ward off regulation that could set an example for other states to follow. The money has been used to flood California voters with misleading information, framing Prop 22 as a pro-worker effort.

Opponents of Prop 22 — led by California’s labor unions, working closely with about 50,000 drivers — have reported spending just over $12 million. They knew early on that they would never be able to match venture capital-backed corporations in funding so they had to be strategic. They decided to focus their outreach on the state’s more than 2 million union members, with the goal of convincing 75% of them to vote against Prop 22 — and hopefully to convince their friends and family members to do the same.

“Which is a tall, tall order, to be quite honest. First and foremost, to get that many to vote, and then getting them to vote our way,” Christian Castro, the communications director for the Los Angeles County Federation of Labor said. 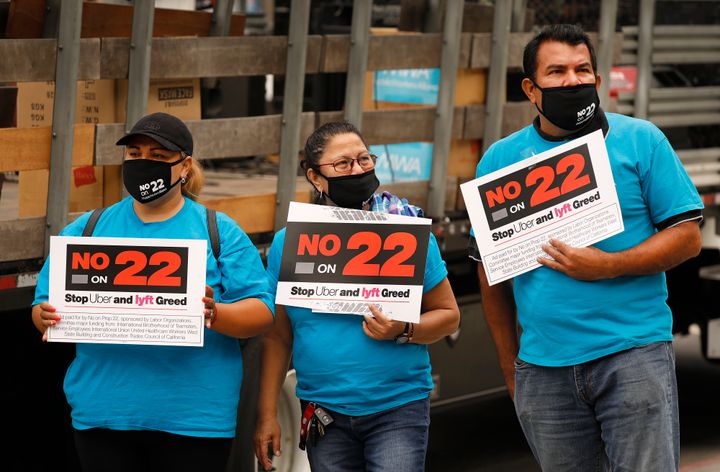 Despite the dramatic spending disparity between the two sides, a September poll showed the Yes on 22 effort just three points ahead of its opponents. Prop 22 is, at its core, an effort by wealthy corporations to buy their way out of complying with California’s labor protections. In 2018, the California Supreme Court ruled that employers can only classify workers as independent contractors if the worker is free from the control and direction of the employer, is doing work outside the employer’s main business and is engaged in an “independently established trade, occupation or business.” California state legislators codified and expanded that ruling the following year in legislation called Assembly Bill 5.

Uber, Lyft and DoorDash began funding the ballot initiative to exempt them from complying with AB5 before the law even went into effect earlier this year. When it went into effect in January, gig economy companies refused to comply. California Attorney General Xavier Becerra sued Uber and Lyft in May for failing to classify their drivers as employees. The lawsuit could force the rideshare companies to pay workers hundreds of millions of dollars in restitution.

The hundreds of thousands of people who drive and deliver for app-based companies in California — who are disproportionately people of color — have the most immediate stake in the outcome of Prop 22, which would impact whether they are entitled to fair wages, adequate health insurance, sick leave and unemployment insurance. And the COVID-19 pandemic has pushed thousands of gig workers to the edge of crisis.

When Mekela Edwards, a 49-year-old Uber driver in Oakland, first heard on the news that the coronavirus was making its way into the U.S., she suspected that her asthma placed her in a high-risk category. She called her doctor, who told her to stop driving immediately and that she had a 15% chance of dying if she contracted COVID-19. She applied for assistance from Uber, but she never heard back, she said. Like other drivers for Uber and Lyft, Edwards has struggled to collect unemployment benefits because her employer classifies her as a contractor.

It was the first time Edwards became aware of how vulnerable she was as an app-based driver. “I had no safety net. My mentality everyday was to just work hard and then I would be OK,” she said. “But many drivers, like me, had to make a choice. We had to make a choice of if we were going to earn a living and take a risk of getting sick or dying, or stay at home and not necessarily know where our next meal was coming from.”

The ballot initiative also has implications for unionized workers, who are watching the app-based gig economy move into industries that have historically been a source of decent-paying blue-collar jobs.

“Prop 22 sets a dangerous precedent, potentially a race to the bottom where other industries will say, ‘Oh, well if Uber and Lyft have been able to do this, should we think about adopting this model?’” Adan Alvarez, the communications director for Teamsters Local 396, said.

“Any Teamster who’s behind the wheel of a vehicle already knows about misclassification — already knows that we’re being undercut by that business model,” said Doug Bloch, the political director of Teamsters Joint Council 7. “And that it makes it hard every time we go to negotiate contracts and we’re asking for raises or we don’t want any copay on our health care and we know these companies are floating around out there that have none of those costs.”

The California Labor Federation is aiming to contact each of its members about Prop 22 six to eight times, either by phone, text, mail or a work site visit. But the corporate giants pushing Prop 22 have a unique advantage in this fight. In addition to seemingly endless cash, they have direct access to most voters and have even used their own workers to do the unpaid labor of distributing propaganda.

Before getting a ride, Uber has required customers to “confirm” a message claiming that if Prop 22 fails, riders will face increased costs and wait times and drivers will lose their jobs. Californians who have taken a Lyft have received emails urging them to vote Yes on 22 to provide drivers with “new benefits” and allow them to “maintain their independence, which is what the vast majority want, by a 4 to 1 margin.” The four to one statistic comes from an online survey commissioned by Lyft, which polled people who identified as independent contractors — just 9% of whom identified as gig workers.

Uber and Lyft have both threatened to leave California if they are forced to follow state law and classify their workers as employees, a scare tactic that could prove effective in a state with limited public transportation.

The Yes on 22 campaign has used mailers, television ads and online ads to push paid testimonials of workers who say they rely on the flexibility of the status quo to juggle school and family commitments — although there is no legal reason why workers could not maintain that flexibility as employees. The campaign has spent more than $5 million on Facebook ads and nearly $3 million on Google ads. For voters who use Google to search “No on Prop 22,” the first result is an ad for the Yes on Prop 22 website.

Public records show that the Yes on 22 campaign has spent more than $800,000 on slate mailers, publications created by campaigns or consulting groups with names that suggest their recommendations are endorsed by a trusted legitimate group. According to expenditure filings, Yes on 22 is behind: the “California Latino Voter Guide,” the “Cops Voter Guide,” the “No Party Preference Voter Guide,” “Continuing the Republican Revolution,” and “Progressive Slate.” California voters have also received pro-Prop 22 mailers claiming to come from the “Feel the Bern, Progressive Voter Guide” — a move Sen. Bernie Sanders, who opposes Prop 22, described as a “lie.”

In a press conference earlier this week with Black and Latinx elected officials and organizers, Cherri Murphy, an Oakland-based driver, urged voters to reject Prop 22. “I know what it’s like to be a gig worker to work with exploitive app companies, such as these corporations. I know what it’s like to experience lip service in support of Black lives, completely hollow words, hiding behind billboard signs, and big checks, created by public relations teams in absence of any real change. I know what it’s like to work long hours with no guaranteed wage, no work breaks and no restroom facilities and no overtime. I know what it’s like to have a looming threat of an accident with no coverage, deactivation based on discrimination, or retaliation with no protections, no remedies and no voice.”

“We should not allow corporations to buy labor laws for the benefit of themselves, while they continuously exploit their workers.”