Japan’s Vice Defense Minister Makoto Oniki said the missile, which reached a maximum altitude of 3,728 miles, was possibly a new type of ICBM. Japan’s coast guard, which warned vessels in nearby waters about the potential for falling objects, said it believed the missile flew about an hour before landing in waters outside the country’s exclusive economic zone.

“This launch is a brazen violation of multiple UN Security Council resolutions and needlessly raises tensions and risks destabilizing the security situation in the region,” White House press secretary Jen Psaki said. “This action demonstrates that the DPRK continues to prioritize its weapons of mass destruction and ballistic missile programs over the well-being of its people.” 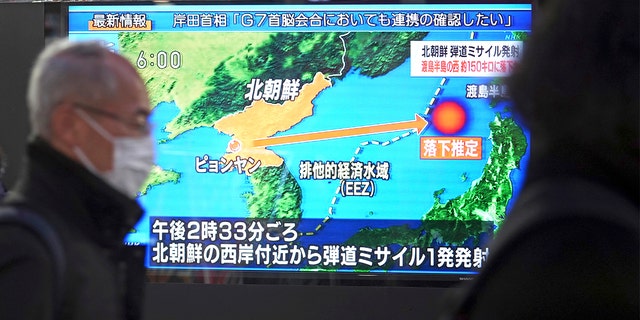 The White House urged “all countries to hold the DPRK accountable for such violations and call on the DPRK to come to the table for serious negotiations.”

“The door has not closed on diplomacy, but Pyongyang must immediately cease its destabilizing actions,” Psaki said. “The United States will take all necessary measures to ensure the security of the American homeland and Republic of Korea and Japanese allies.”

The new ICBM system was originally unveiled during the Korean Workers Party parade Oct. 10, 2020, and again in the Defense Exhibition in Chung Young in October 2021, the official said Thursday. The 2022 launches did not demonstrate ICBM range or capability but were likely aimed at testing elements of the new system, a senior administration official said earlier this month.

The senior administration official, at the time, predicted a future launch at “full range,” which may be disguised as a space launch.

North Korea in January fired what appeared to be its most powerful missile since President Biden took office, a move senior U.S. officials described at the time as concerning and “increasingly destabilizing.”

The Japanese and South Korean militaries said the January missile was launched on a high trajectory, apparently to avoid the territorial spaces of neighbors, reached a maximum altitude of 1,242 miles and traveled 497 miles before landing in the sea.

The flight details suggested North Korea tested its longest-range ballistic missile since 2017, when it flew ICBMs that demonstrated the potential to reach the U.S. 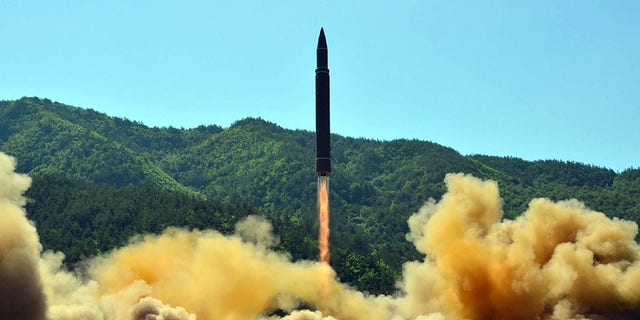 This picture taken on July 4, 2017, and released by North Korea’s official Korean Central News Agency (KCNA) on July 5, 2017, shows the successful test-fire of the intercontinental ballistic missile Hwasong-14 at an undisclosed location.
(STR/AFP via Getty Images)

The intelligence community also warned that North Korea’s “chemical and biological weapons (CBW) capabilities remain a threat” and said U.S. intelligence officials are “concerned that Pyongyang may use such weapons during a conflict or in an unconventional or clandestine attack.”

The intelligence community found that Kim “views nuclear weapons and ICBMs as the ultimate guarantor of his totalitarian and autocratic rule of North Korea and believes that, over time, he will gain international acceptance as a nuclear power.”

“He probably does not view the current level of pressure on his regime, the economic hardships resulting from sanctions and his domestic COVID-19 countermeasures as enough to require a fundamental change in approach,” the intelligence community warned, adding that Kim “aims to achieve prestige as a nuclear power as well as strategic dominance over South Korea.”