President Biden’s bid to inject government deeper into the private sector is getting its first big test in the broadband industry.

Congress on Tuesday advanced legislation that allocates $65 billion in new taxpayer money to expand high-speed internet access for millions of unconnected households—by far the largest allocation of federal funds ever earmarked for broadband.

The Senate approved it as part of the broader $1 trillion infrastructure bill passed on Tuesday. The measure still requires House approval, where the path is more complicated.

The legislation would wire communities across the country that companies haven’t reached and subsidize bills for low-income households. Private companies would be required to publish details about their products, much like nutrition labels, and offer low-cost service plans if they take federal funds to help build networks.

In doing so, proponents say, the legislation recasts broadband service as a necessity, more akin to water and electricity, to which everyone should have access. Government estimates say about 14 million Americans lived in areas without high-speed internet as of 2019, but officials acknowledge that data is incomplete, and private estimates put the figure at 40 million or higher.

"It’s a more robust government role in a key part of the economy," said Bharat Ramamurti, deputy director of the White House National Economic Council. "It’s an opportunity, another opportunity, to show that government really can work for people."

For the broadband industry, which has flourished for decades without strict governmental oversight, the initiative set off alarm bells. While telecom and cable giants ranging from AT&T Inc. to Comcast Corp. stand to benefit in the near term from a big infusion of cash if the bill becomes law, industry officials worry about the precedent this sets for greater government intrusion in their business.

Some aspects of the legislation have drawn industry complaints, at least privately, including provisions that empower federal and state officials to direct how new subsidies are spent, regulate pricing disclosures and authorize new rules preventing "digital discrimination."

"The details on implementation and the inevitable unintended consequences are going to matter," said Jonathan Spalter, CEO of USTelecom, a trade association for broadband providers such as AT&T and Verizon Communications Inc. "Some in Washington continue to be chronically allergic to the notion that America’s broadband providers—today, right now—deliver world-class connectivity, affordable and valuable service plans, reliability and network capacity that have been a technological and economic boon."

Many providers agree that government help is necessary to connect remote regions. "Sparsely populated areas are difficult for any communications provider to serve due to the costs of building and maintaining the network infrastructure," said Lumen Technologies Inc., a large Louisiana-based internet service provider. "Which is why policy makers are proposing historic levels of funding to support broadband build-out in rural areas."

Since taking office in January, Mr. Biden has laid out an expansive economic blueprint designed to recalibrate the balance of power between Washington and corporate America.

The White House and congressional Democrats hope to follow up the infrastructure bill with a separate $3.5 trillion spending plan that would create new government roles in electricity production and transmission, child care, elder care, pre-K and community college. The Senate passed a budget blueprint early Wednesday, the first step in that arduous process.

The bulk of the roughly $1 trillion infrastructure measure the Senate passed on Tuesday goes to industries that have long been heavily subsidized and regulated, such as roads, bridges, public transit and Amtrak.

This would be the biggest-ever government foray into internet infrastructure; Mr. Biden and his aides like to compare their broadband plans to Franklin Roosevelt’s New Deal policies spreading electricity through rural America.

The administration originally pushed Congress to steer federal broadband funds to local government, nonprofits and other alternatives that would compete with incumbent private providers. It also wanted to direct the use of high-speed fiber on new networks, brushing aside older technologies.

Those ideas have been dropped or weakened in the face of opposition from lawmakers and industry executives who warned such changes would backfire, raise prices, waste funds on unnecessary projects and chill business investment.

Maine Sen. Susan Collins, the Republicans’ lead broadband negotiator, repeatedly threatened to hold the bill up until the administration and Democrats agreed to drop their most far-reaching demands, according to people familiar with the negotiations. As a product of bipartisan talks, the bill passed by a vote of 69 to 30, with 19 Republicans joining all 50 in the Democratic caucus.

"We are pleased that some of the troubling anti-industry language that was floated early in the process did not make it into the bill," said Michael Powell, president of the trade group NCTA—the Internet & Television Association, which represents Comcast, Charter Communications Inc. and other big cable companies.

Mr. Powell, who ran government internet policy as chairman of the Federal Communications Commission under President George W. Bush, had branded the original Biden broadband proposal as "surprisingly Soviet" for its treatment of the private sector.

The legislation stops short of turning broadband into a public utility, and in the short run will funnel cash to cable and fiber-optic companies that will help them build networks and acquire new customers.

It also boosts Washington’s involvement, including through greater subsidies for both providers and customers, and a variety of new rules. Mr. Biden is separately directing agencies to write a plan to boost oversight of internet service providers. 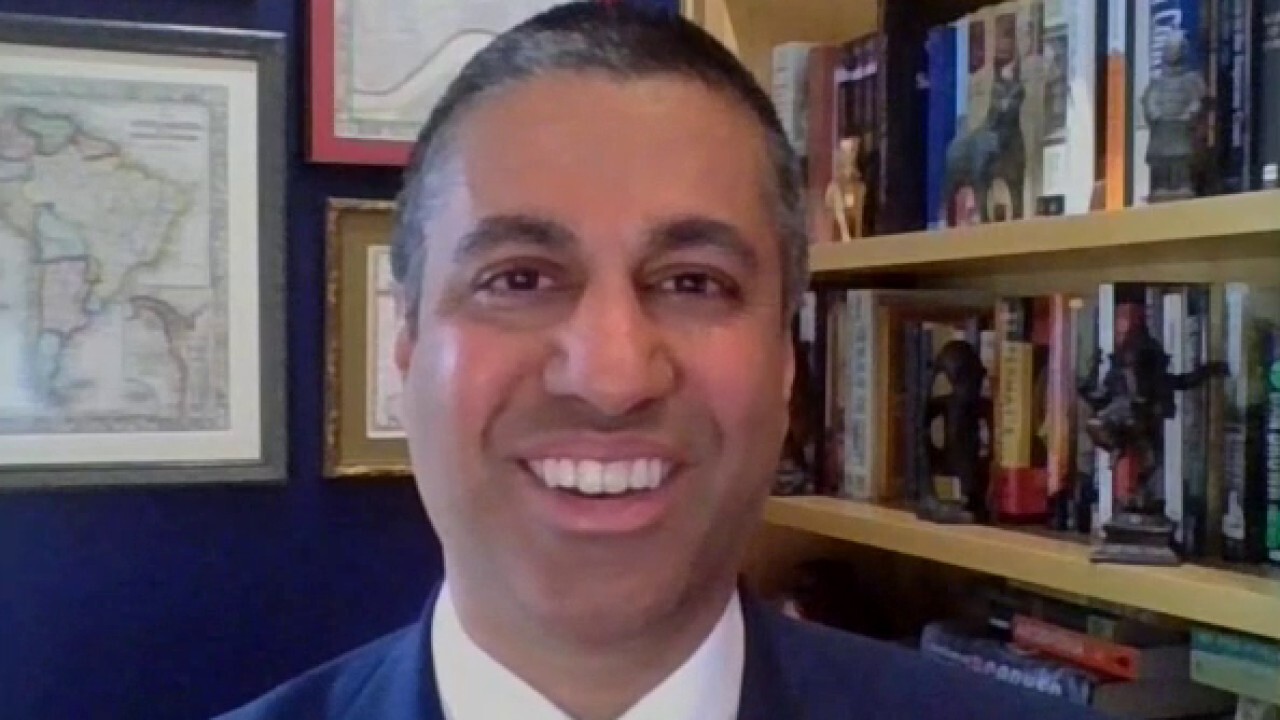 Ajit Pai: Where did $100 billion broadband spending come from?

Ajit Pai on section 230 and infrastructure

"It’s an absolute sea change, a significant increase in the involvement of the federal and state government in the broadband market," said Gigi Sohn, an FCC official in the Obama administration who advised Biden officials and Democrats on the legislation. "Is it everything I would have wanted? No. But it’s a major step forward and can be supplemented with action from the FCC and other agencies," said Ms. Sohn, herself a possible candidate to run the agency under Mr. Biden.

The American internet has grown up over the past quarter-century in an era defined more by deference to market forces. The country’s modern technology infrastructure sprang from the 1984 breakup of a heavily regulated longtime monopoly, American Telephone & Telegraph Co., and the 1996 Telecommunications Act, which was designed to foster competition.

Government has over the years played a role in broadband service. The U.S. Department of Agriculture began funding rural internet-service projects in the early 2000s, and the federal Universal Service Fund, rooted in extending telephone service, since 2011 has been increasingly subsidizing high-speed internet access.

Policy makers applied a lighter touch than earlier generations did with services from the telephone to television, electricity and water. The Obama FCC in 2010 declared access to high-speed internet vital to all Americans. Still, its "National Broadband Plan" for connecting unplugged communities said "the role of government is and should remain limited."

Defenders of that less-intrusive approach say it has encouraged investment in new networks. USTelecom estimates the industry’s annual capital expenditures averaged about $74 billion between 2008 and 2019. While U.S. officials have struggled to measure the precise extent of the "digital divide," available federal data show it narrowing as competing providers extend their networks and customer base.

Unlike utilities, many internet providers aren’t required to serve everyone equally. A 2019 Agriculture Department study estimated that one in four U.S. farms had no access to the internet. Activists protested what they called "digital redlining," or internet providers in cities extending the fastest fiber service to affluent neighborhoods, while keeping older, slower technologies for lower-income regions.

In regions where high-speed internet was available, consumer groups griped about high prices, and blamed what they said was a lack of competition. A 2018 FCC report said 72% of Americans had access to only two or fewer fixed high-speed internet providers.

Internet executives say much of the criticism is inaccurate. They blame government policies for slowing investment in rural areas. Low sign-up rates in low-income urban areas, they said, resulted from difficult-to-solve factors that went beyond price. Comcast, in a report this year on its offering for low-income households, said other barriers to broadband adoption include "a lack of perceived need" and "not having functioning equipment."

When the pandemic pushed work, schooling and socializing online, that highlighted the disadvantages for those without internet access. That helped broaden the circle of interests lobbying for universal broadband. "The stars have aligned in a way they had not previously," said Vickie Robinson, head of Microsoft Corp.’s initiative to expand internet access. "You have strange bedfellows coalitions, of civil rights groups aligning with big telecom companies."

In the first year of the pandemic, Congress under Presidents Donald Trump and Biden passed a series of measures that increased federal broadband spending. Then Mr. Biden in March proposed a much larger, long-term package aimed at creating universal broadband.

Republicans and industry embraced his call for more spending, but pushed back against his demands for more public involvement. Talks snagged, among other things, over a $14.2 billion program to make broadband more affordable for the estimated 15 million households that live in areas where broadband is generally available but don’t subscribe.

Commerce Secretary Gina Raimondo spent much of a late-July weekend negotiating with Ms. Collins over the details of low-cost plans that some companies would be required to offer. The administration wanted to set a specific price ceiling in the bill; Ms. Collins balked and the bill doesn’t mandate a rate cap.

"What it boiled down to was a fundamental difference of opinion of whether or not this industry should be treated as a public utility complete with rate setting and ongoing regulation by the federal government," said Ms. Collins, summarizing the weekslong negotiations.

The roughly $1 trillion bill treats broadband alongside other forms of infrastructure, as worthy of government support—a Biden goal. It includes $42.5 billion in grants to states aimed largely at ensuring communities without access to broadband finally get it. Under the plan, states would steer federal subsidies to companies, local governments, or nonprofits that pledged to use the funds to build out high-speed broadband infrastructure to regions where such technology doesn’t currently exist.

The focus on broadband affordability, especially in urban areas, verges on making internet access an entitlement. "It’s a very big change," said Blair Levin, a former FCC official who co-wrote the Obama administration’s 2010 broadband plan. "It’s similar to the development of Medicaid, when they declared low-income people shouldn’t be without health insurance—now we can’t afford to have people offline."

The bill leaves key details to the states spending the money, and to the Commerce Department’s National Telecommunications and Information Administration, which will approve those grants. That may give Biden officials a chance to accomplish through rule-making and grant awards what they couldn’t through legislation.

"The original Biden proposals were the high-water mark of the progressive wish-list of the last 15 years," said Michael O’Rielly, a Republican member of the FCC from 2013 through 2020. "Many of them were rejected. But the language in some instances leaves the door open to those policies."

To read more from The Wall Street Journal, click here.