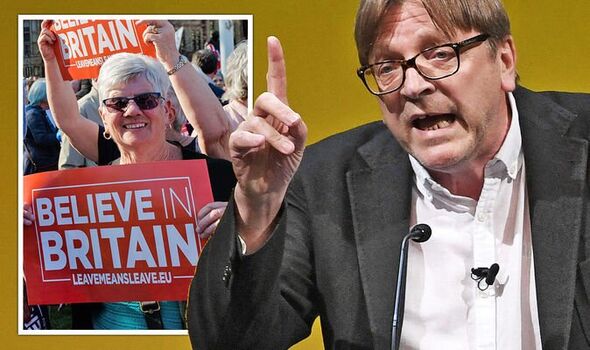 The Belgian politician is campaigning to overturn the outcome of the 2016 vote as he continues to fight the UK’s freedom from Brussels, two years after Britain left the bloc.

“Yet no opposition party dare represent them and the next Tory Government will be the most eurosceptic yet.

Mr Verhofstadt made his remarks despite polling showing very little movement on voters’ views on Brexit.

While the UK voted to leave the EU by 52 percent to 48 in 2016, the number of people who now believed leaving was a mistake has crept up to 53 percent.

Mr Verhofstadt’s intervention came as he promoted a new campaign being launched in the UK to rejoin the EU.

Next month, Rejoiners are planning to take to the streets in London to demand the democratic outcome from the 2016 referendum be overturned.

They will meet in Hyde Park at midday before marching to Parliament.