Tory leadership: A look and Truss and Sunak’s policy’s

Rishi Sunak and Liz Truss set out their stall on Sky News’ leadership debate as they vie for the keys to Downing Street. During the debate, the candidates were grilled by an audience comprised of more than 60 Tory voters as well as the presenter Kay Burley. Ms Truss stepped up to face questions first, setting out her plan to keep taxes low, deliver on the opportunities of Brexit and fend off a recession. She had a tough time taking questions on her U-turn this week, in which the Foreign Secretary ditched her policy to save £8.8billion by cutting wages for public sector workers outside of the southeast. Ms Truss was asked if she would apologise for the “offensive” policy – she did not, but she did say she has “changed her position” and is not going ahead with it.

She  also clashed with an audience member over the national debt – Ms Truss has said the country shouldn’t “balance the books straight away”, but one member in the audience said she didn’t want to see her children saddled with debt.

On Ukraine. Ms Truss vowed to help the country “defeat” Vladimir Putin and rubbished the idea that Ukraine should cede territory.

Despite energy companies’ mega profits during the cost of living crisis, Ms Truss said she did not agree with a windfall tax.

Ms Truss was greeted with cheers when she said she wouldn’t apologise to Nicola Sturgeon after saying she should be “ignored.”

She also refused to share the naughtiest thing she has ever done – avoiding a Theresa May ‘fields of wheat’ moment.

On Boris Johnson, Ms Truss said he “did a good job” on the vaccine, Brexit and Ukraine, but admitted that he had “made mistakes” – this was greeted with a mixture of agreement and disagreement from the audience.

Mr Sunak went into tonight’s debate looking to overturn a huge 30 point plus deficit, per the polls released this week.

He said he is going to “fight” to try and win the contest despite Ms Truss’ commanding lead, and argued that he is the best man to take on Keir Starmer’s Labour Party.

His track record as Chancellor came under the microscope – one audience member blamed the ‘eat out to help out’ policy for the spike in Covid deaths in 2020. 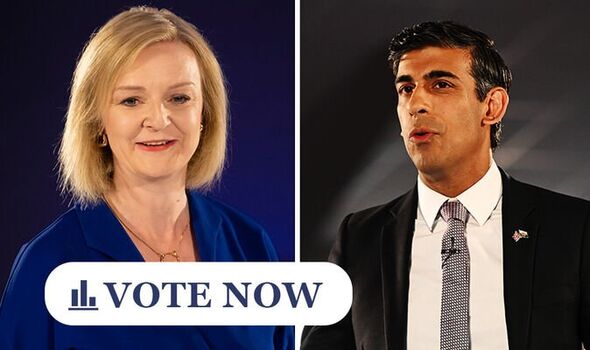 Mr Sunak defended the policy, arguing that it protected jobs and businesses.

Ms Burley also asked him why people should trust the the man who was Chancellor during this difficult period.

Mr Sunak boasted of his record during the pandemic, and called on the country to “grip inflation” dismissing the idea of borrowing more money.

Quizzed on healthcare, Mr Sunak called for reforms on the NHS, including a “radical” plan to tackle missed appointments by charging people.

Asked how he will tackle illegal immigration, Mr Sunak said he is prepared to change the definition of asylum, moving away from the European definition “exploited by lefty lawyers”.

He also criticised for turning his back on Prime Minister Johnson. He said it got to a point where it was “too difficult to stay” due to economic disagreements.

One audience member accused Mr Sunak of “knifing Boris for your own interest”.

Applause greeted the former Chancellor as he outlined the tough sanctions he and other finance ministers levelled against Russia after the invasion of Ukraine.

During the quickfire round, Mr Sunak addressed a video from 2001 in which he said he had no “working class” friends – he admitted he “said something silly.”

Asked about his personal wealth and the perception that he is out of touch, Mr Sunak said he thinks he should be judged by his character, not his bank account.

At the end of the debate, Mr Sunak won over a lot more of the audience by a show of hands.

But what do YOU think? Who was the strongest candidate in the latest Tory leadership debate? Vote in our poll and join the debate in the comment section below.