VP Pence on debate fly: My kids told me about it

Vice President Mike Pence addresses the fly that landed on his head at the vice presidential debate on ‘The Daily Briefing.’

When you think of the battlegrounds that could decide whether President Trump or Democratic nominee Joe Biden win next month’s general election, Maine often doesn’t come to mind.

It’s been 32 years since a Republican carried the northern New England state in the race for the White House. You have to go all the way back to then-Vice President George H.W. Bush in 1988.

BIDEN AND TRUMP COURT SENIORS IN THE BIGGEST OF BATTLEGROUNDS

But Maine is one of only two states – along with Nebraska – that divides its electoral votes by congressional district – and Trump won the state’s more rural Second Congressional District four years ago. 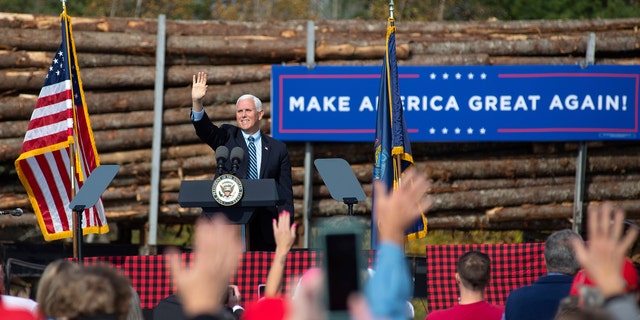 An average of the most recent polls in Maine indicates Biden far ahead in the statewide battle but point to a close contest for the Second Congressional District.

Pence, during his event on Monday, took aim at the Democratic nominee for so far not answering if he supports a push by some progressive Democrats to expand the size of the Supreme Court next year if the Democrats win the White House and the Senate majority, in order to balance a court that will move to a 6-3 conservative majority if Trump nominee Amy Coney Barrett is confirmed.

“To borrow a phrase, ‘Come on, man!’ Joe, the American people deserve a straight answer. When you’re running for the highest office in the land, you gotta say whether you're gonna respect the highest court in the land,” Pence said.