A Pennsylvania mother of eight who gave instructions for storming the U.S. Capitol building through a bullhorn has been arrested.

Rachel Marie Powell, 40, was captured in numerous social media photos and videos on the day of the Jan. 6 insurrection attempting to gain entry into the Capitol. As thousands of Trump supporters pushed forward and attempted to breach the building, Powell was “clearly seen speaking through a bullhorn and giving very detailed instructions about the layout of the Capitol building,” according to charging documents released Friday.

The day’s violence began after former President Donald Trump gave a speech falsely claiming the 2020 presidential election had been stolen from him. He urged his supporters to “fight like hell” and march to the Capitol, promising he would march with them (he did not). Five people died as a result of the ensuing chaos, including Capitol Police Officer Brian Sicknick, who was bludgeoned in the head with a fire extinguisher by the mob.

In a video obtained by the FBI, Powell can be heard saying that she had already been inside the Capitol, and said that she and other insurrectionists should “coordinate together if you are going to take this building” and that they “have another window to break,” charging documents reveal. 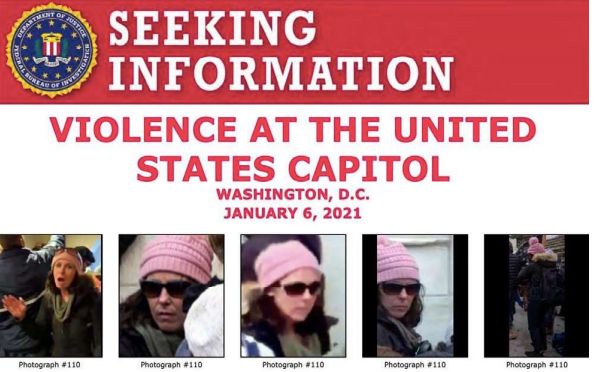 Powell, who was identified by an anonymous person who responded to an FBI wanted poster, was seen in another video handling a large pipe that was used to smash a Capitol building window. Powell was also captured on video inside the Capitol, authorities said.

Authorities also identified Powell’s cell phone number, which had been connected to cell towers in the D.C. area on the 6th.

Before her arrest, Powell spoke to New Yorker reporter Ronan Farrow about her role in the day’s violence.

“I was not part of a plot — organized, whatever,” Powell, who spoke from an undisclosed location, told Farrow in a Feb. 2 profile. “I have no military background … I’m a mom with eight kids. That’s it. I work. And I garden. And raise chickens. And sell cheese at a farmers’ market.”

Powell turned herself in to the FBI in New Castle on Thursday night, WPXI reported.