Women are underrepresented in political office on the municipal level, according to a new report released Thursday by Rutgers University,findings that contradict previously held beliefs that women are more likely to hold office locally than on the state or federal levels.

An analysis of census-level data by Rutgers’ Center for American Women in Politics — the first university-based center to focus on women’s participation in American politics on a national scale — found the percentage of women in municipal office virtually matches that of women serving in state government and in the House of Representatives.

Currently, 30.5% of women occupy municipal seats, 30.9% are in state legislatures, and though Pew Research Center reported the number of women serving in the 117th Congress increased 50% from 10 years ago, 26.5% hold seats in the House.

“There’s always been this assumption that, if we just went down a little further, if we just got to a more local level, that we would see a lot more women there,” Debbie Walsh, Director of CAWP told USA TODAY. “And we have long suspected that was, in fact, a myth. And the data now bears that out.”

Walsh said the assumption derived from conveniences offered to women in local politics not available at the federal level.

“At the municipal level, you can live in your home and see your kids and if you have children and school-age kids, that might be a little bit easier. But as I say, we’re seeing that the numbers are pretty similar to what we’re seeing at the state legislative level.”

Over 40% of women serve in local offices in only five states, according to data provided by CAWP and Politics and KnowWho Data Services. Chelsea Hill, CAWP data services manager, said the data set compiled by KnowWho contained 28,000 women serving in municipal legislatures in incorporated cities and towns with census verified populations over 10,000 people. Analysts at CAWP manually verified the gender of each person listed.

The report also revealed that about 20% to 29% of women occupy local seats in most states and states with the highest number of women in municipal seats tend to correspond to the lowest amount of qualifying municipalities. Hawaii, the top state, has only one incorporated municipality in its capital, Honolulu. There is a 50-50 ratio of men to women in local office.

The state with the second-highest number of women serving, Alaska, has six qualifying counties. Women occupied 46% of local seats compared to 52% of men. Colorado is ranked third highest but has significantly more qualifying counties (60) with 10% fewer women (44.4%) than men (55.4%) serving in local office.

Walsh said Western states like Colorado, Alaska and Oregon consistently do better at electing women in part because of less party control.

“There is a process there that is more open. I think there are fewer gatekeepers, meaning the party structure may be more open more transparent in places where it is harder for women to break in,” she said. “Usually, parties have a stronger role in making the decision about who runs and who doesn’t run.”

Nebraska ranks last in the country with 17.7% of women serving in 16 qualified counties compared to 82.3% of men. Mississippi is next to last but has fewer women (19%) serving in 41 qualifying counties, considerably more than Nebraska. 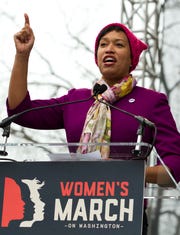 “They’re 48th in our state legislative ranking,” Hill, said about Mississippi. “And they’re consistently there. They’ve been there for years. So, that doesn’t surprise me that they are also in the bottom ranking for (women in local office.)

Indiana ranks 48th on the list for women serving locally.  Nearly 21% of women hold  office in 96 qualifying counties compared to 79% of men.

Comparisons between local and state offices are similarly striking. Nevada currently holds the title for most women in state legislatures (60.3%) but relatively fewer women serve in municipal office (42.6%).

The bottom-ranked state for female representation in state legislatures is West Virginia (11.9%) but the amount of women in local office there is doubled in percentage (24.1%).

“I think one of the things that we have always found in our research is that women bring different perspectives, different points of view, different life experiences to governing, to making policy and to implementing policy,” she said. “It’s not that men don’t understand it, but they understand it from their perspective. I think women understand (governing) in a different way.”

The perspective is shared by some advocacy groups that say issues surrounding children and families are directly impacted when more women serve in office.

‘It’s about changing institutions’: Black women legislators are rare in statehouses. This could be the solution.

The Backstory: Pelosi’s No. 1 lesson on power: ‘Nobody’s going to give it to you. You’ve got to take it.’

“Building up the numbers and power of diverse women in office ensures that our voices are heard, our issues are addressed, and our rights are protected,” said Emily Cain, executive director of Emily’s List, an organization that promotes female Democratic candidates.

“We still have work to do to achieve equal representation in elected office, but it’s clear that when women are in charge, good things happen,” she added. “From addressing the global pandemic, to demanding accountability for racial injustice and calling out attacks on reproductive rights, our nation continues to see the bold change that is possible when women lead.”

Ann Schockett, president of the National Federation of Republican Women, told USA TODAY that women are more inspired to run for office when they see themselves represented in politics.

“More than ever, in recent years and throughout our country, women are realizing and understanding the necessity of they themselves being involved, and they are stepping up to take an active role in being a representative voice on all issues. Strong women elected leaders from all backgrounds are inspiring more women that it is within their reach to run for office and engage in public service at all levels,” Schockett said.

Walsh and Hill say the report will be released every year to provide a snapshot of women’s progress in local politics.

“What I hope happens is what I hope people use this data set for its kind of go to their state and say, ‘OK so what’s going on here?’ Why are we so low on the totem pole or on this list because I mean, I think it’s a problem,” Hill said.