JAKARTA (Reuters) – Indonesia’s president, Joko Widodo, brandished his nationalist and religious credentials on Friday amid reports he had come under pressure from Islamic party allies to accept a conservative cleric as running mate in next year’s election.

In a last-minute decision, Widodo announced on Thursday Ma’ruf Amin, who heads the board of advisers of the country’s biggest mass Muslim organization, Nahdlatul Ulama (NU), would be his vice presidential candidate for April’s poll.

The duo will be challenged by the former general Prabowo Subianto and the private equity tycoon and Jakarta deputy governor Sandiaga Uno.

Wearing a crisp white shirt emblazoned with the slogan “Clean. With the people. Real work.”, Widodo told supporters on Friday he would “safeguard national resources”.

He cited as evidence recent policy decisions to nationalize oil and gas assets and seize majority ownership of the huge Grasberg gold and copper mine from the U.S. based Freeport-McMoran.

“It is proof that we are sovereign,” he said.

Amin later led the crowd in prayer, asking God to “give us the capability and spirit to safeguard us against forces that try to destroy, to weaken us and our country.”

The pair left the stage as Islamic singing, rendered in Arabic, played.

The cleric then delivered a sermon at Friday prayers at Jakarta’s biggest mosque.

Prabowo and Uno were to have gone to the mosque before formally registering as candidates at the election commission but changed their plans and prayed at a nearby mosque instead.

Amin also heads the Indonesian Ulema Council (MUI), an influential group for clerics that has issued fatwas hostile to minorities, including the Islamic sect Ahmadiyah and the gay community.

He also issued a statement accusing former Jakarta governor Basuki Tjahaja Purnama of blasphemy for insulting the Koran, an edict that led hundreds of thousands of protesters to swarm the streets of the Indonesian capital demanding his ouster last year.

Purnama, an ethnic Chinese Christian, lost the election as he divided his time between campaigning and defending himself against blasphemy charges in court. He was later jailed for two years.

Indonesian President Joko Widodo and his running mate for the 2019 presidential election Islamic cleric Ma’ruf Amin wave after registering for the election at the General Election Commission in Jakarta, Indonesia August 10, 2018 in this photo taken by Antara Foto. Antara Foto/Akbar Nugroho Gumay/via REUTERS

“As VP, he can bolster Islamic groups and perhaps give some other religious conservative a chance to succeed Widodo,” he wrote.

“(The opposition) are probably going to shift their focus onto ultra-nationalist themes: sell-out to China, invasion of foreign workers, evil imports, predatory investors,” he told Reuters in emailed comments.

“These are classic Prabowo themes anyway, but they will become even more pronounced this time.”

Widodo and Prabowo contested the last presidential election in 2014. Widodo won but his popularity slumped mid-campaign after false reports were spread online that he was a Christian and an ethnic Chinese descendent.

After Friday prayers, Prabowo declared himself the candidate for the poor, touching on another central theme of his campaign: inequality.

“Our job as leaders is to eliminate people’s suffering so that nobody is hungry, naked or suffering … no matter what their religion is.”

“Our friends here are sometimes considered radicals, but believe me, there is no radical Islam in Indonesia,” added Prabowo, who has forged close ties with hardline Islamists. 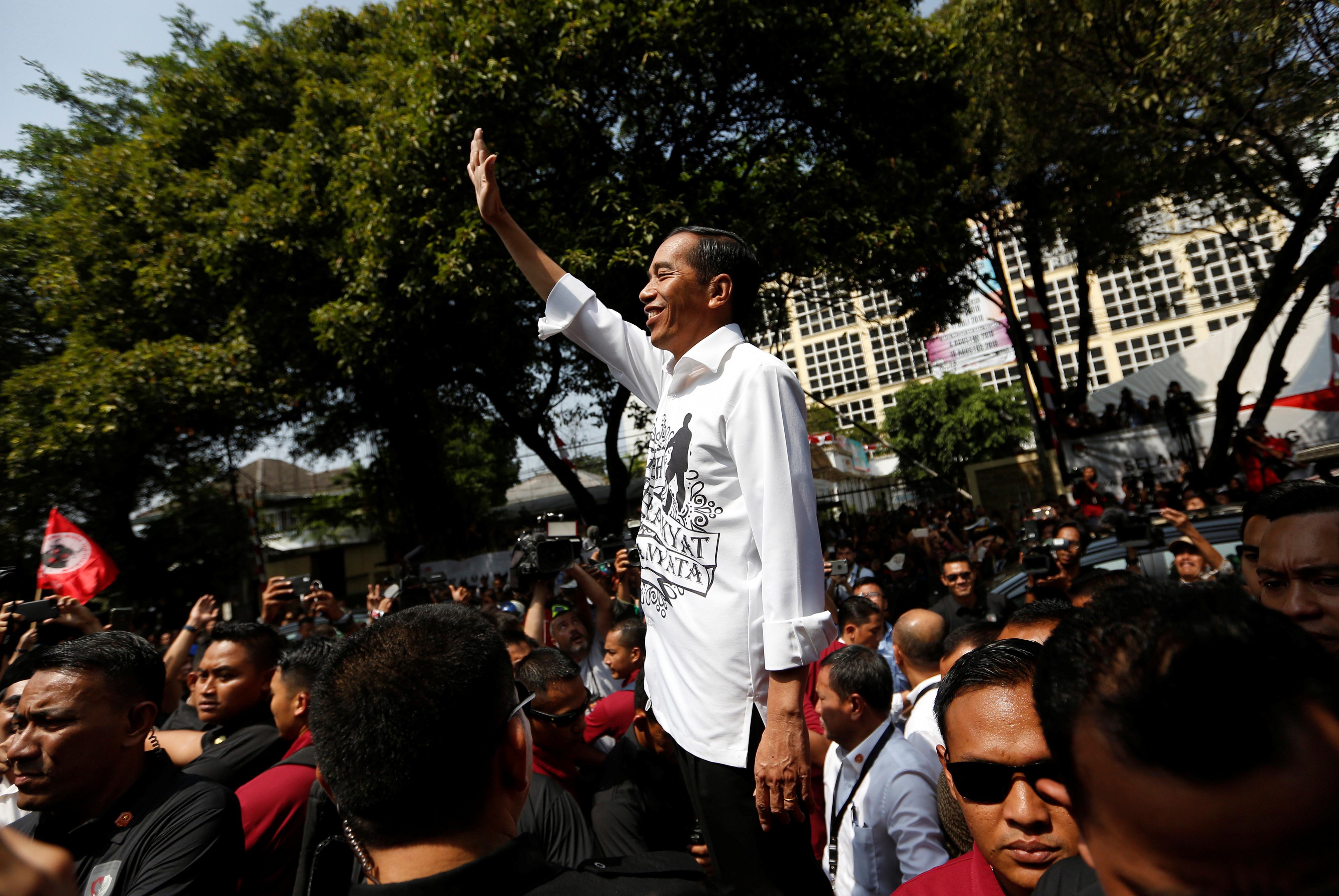 According to party officials from the president’s coalition, Widodo had favored an alternative to Amin, former constitutional court chief justice Mahfud MD.

In a television interview, Mahfud said he was asked “in some detail” to prepare to be the running mate and was on standby to be anointed on Thursday.

Mahfud said it was Widodo’s decision to overlook him.

But, as quoted by the news portal Detik.com, NU board member Robikin Emhas said NU leaders, including Amin, told Widodo that they could not support Mahfud.

“The implications are that four years into his presidency, Jokowi is still much more dependent on his supporting parties than he cares to admit. (It’s) a demonstration of his continued weakness,” he said, referring to Widodo by his nickname.

A presidential spokesman was not immediately available for comment.

A leader of NU-aligned National Awakening Party (PKB), Muhaimin Iskander, told reporters on Thursday it was a surprise Amin was selected and that Mahfud was Widodo’s initial preference.

“I thought Mahfud was chosen. But it turned out to be Ma’ruf Amin,” he said.