CAIRO (Reuters) – Melania Trump concluded her trip to Africa on Saturday by voicing support for her husband’s embattled Supreme Court nominee and urging people to pay less attention to what she wears.

The U.S. first lady said the message of her tour to Ghana, Malawi, Kenya and Egypt was to show the world that “we care.” She dismissed reports about alleged derogatory comments reportedly made by President Donald Trump about African countries and said the issue had not come up on her visit.

The stylish former model also said she did not always agree with her husband’s tweets and gave him her opinion directly, even though he does not always follow her advice.

The four-country trip was a coming out of sorts for the first lady in the world stage. It was her first major solo trip abroad and a rare example of a time when she has answered questions by reporters.

Speaking in Cairo on the tour’s final leg, Trump praised Supreme Court nominee Brett Kavanaugh and said she was glad he and his accuser had a chance to be heard following allegations of sexual assault.

“I’m glad that Dr Ford was heard. I’m glad that Judge Kavanaugh was heard, FBI investigation was done – is completed – and (the) Senate voted,” Trump said, referring to psychology professor Christine Blasey Ford who had accused him of sexually assaulting her.

Kavanaugh has denied all the allegations.

Trump declined to say whether she believed Ford.

“We need to help all the victims, no matter what kind of abuse they had,” she said. “I’m against any kind of abuse.”

Kavanaugh looked likely to win final Senate confirmation on Saturday, weathering the sexual assault allegations and attacks on his character and temperament. His confirmation would give the U.S. president a clear win in his drive to cement conservative dominance of the high court.

Trump flew to Cairo from Nairobi earlier on Saturday on the last stage of her visit to Africa, a continent her husband once referred to derisively.

President Trump has been quoted as saying immigrants from Africa came from “shithole countries”. He denied making the remark. 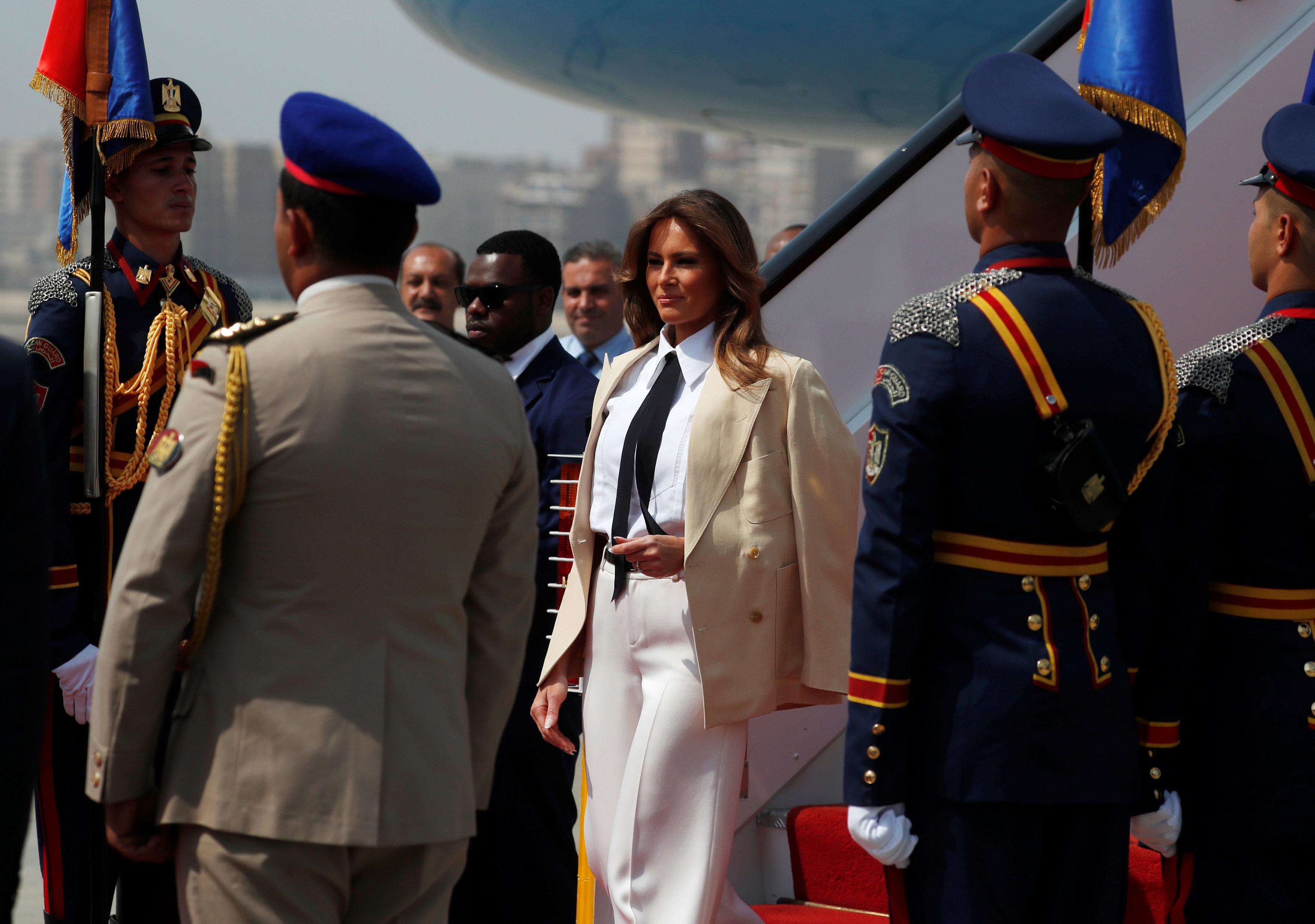 Trump said that her husband’s alleged derogatory comment about African countries did not come up on her trip.

“Nobody discussed that with me, and I never heard him saying those comments. And that was anonymous source and I would leave it at that.”

She said she did not always agree with her husband’s tweets, and that she tells him that. She also said she wished that people would focus on what she does, not what she wears, and then proceeded to pose for pictures in front of some of Egypt’s greatest landmarks.

The first lady came in for some criticism back home for her choice of headgear in Kenya. Some commentators said she had made a mistake by wearing a white pith helmet, a hat favored by 19th century European colonialists, because of its association with the exploitation of Africans.

Trump had earlier received a warm welcome from Egyptian President Abdel Fattah al-Sisi and his wife, Entissar, at the presidential palace in Cairo before she headed to visit the Pyramids and the Great Sphinx.

She wore slacks and a tie as she stepped off the plane in Cairo, where she proceeded to the presidential palace, an ornate cream stone building with arabesque designs.

Military guards stood to attention as Sisi and his wife greeted Trump at the front door.

At the meeting which lasted for nearly one hour, Sisi sat in the middle, with Trump on one side and his wife on the other. No statements were made to the press.

In a Facebook post on Friday, Sisi’s wife welcomed Melania by saying she would arrive to her “second country, Egypt”.

“I am honored to meet the honorable lady, the wife of the American president, in Cairo tomorrow, and to wish her a successful and happy stay in her second country, Egypt,” she wrote in Arabic.

Trump then made a brief stop at the heavily-fortified U.S. Embassy in downtown Cairo, driving through streets nearly deserted due to a national holiday marking the 45th anniversary of Egypt’s 1973 war with Israel.

Trump has focused on her signature issue of campaigning for children with stops at a hospital, primary school and an orphanage. 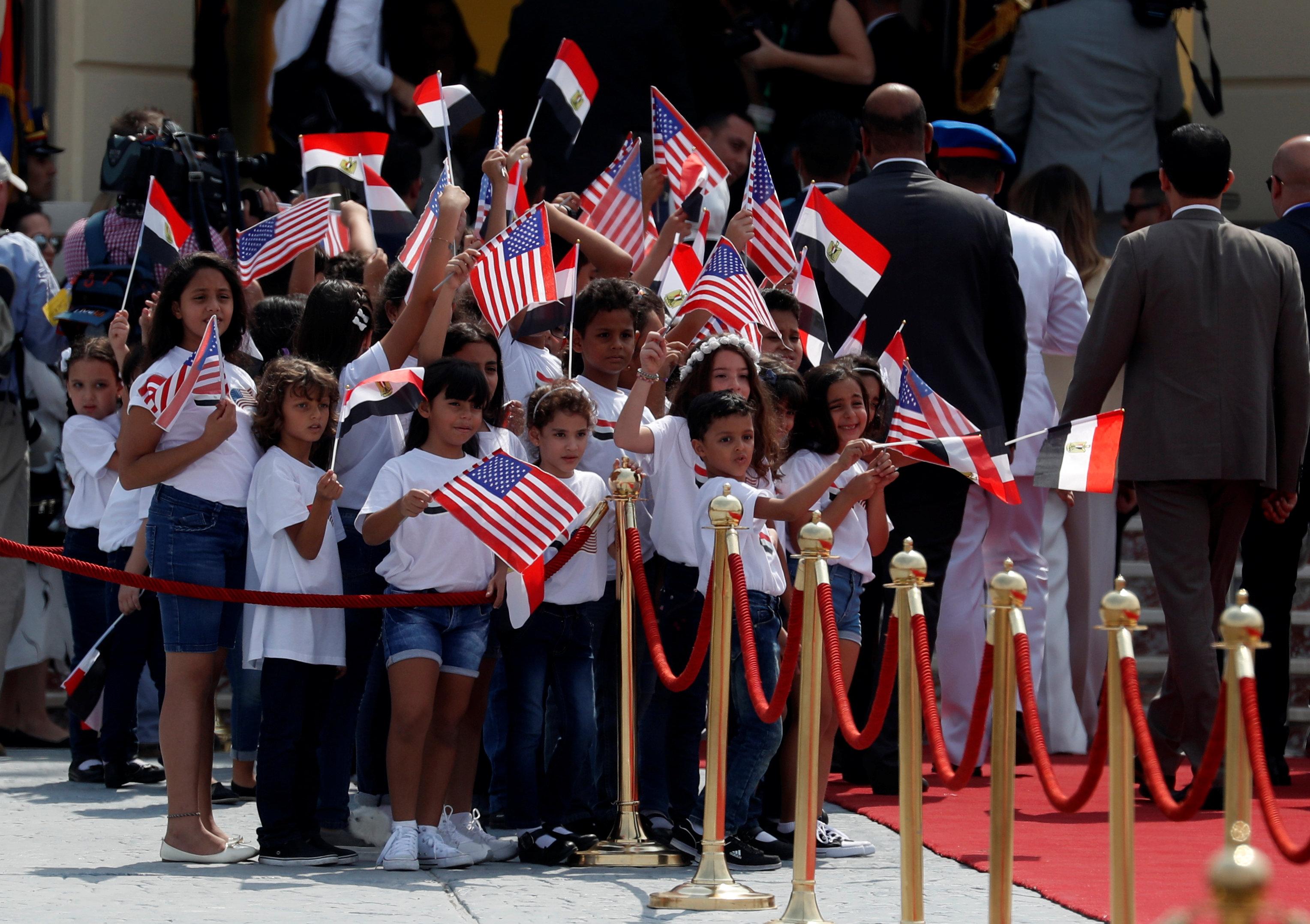 Speaking near the Sphinx, Trump said that the message of her trip has been to show “that we care. And we want to show the world that we care.”