HARARE (Reuters) – Counting began in Zimbabwe on Monday in the first election since the removal of former president Robert Mugabe, a watershed vote that could pull a pariah state back into the international fold and spark an economic revival.

The election is a two-horse race between 75-year-old President Emmerson Mnangagwa, a long-time Mugabe ally, and 40-year-old Nelson Chamisa, a lawyer and pastor who is vying to become Zimbabwe’s youngest head of state.

Mnangagwa is viewed as the frontrunner, though the latest opinion polls showed a tight race. There will be a runoff on Sept. 8 if no candidate wins more than half the votes.

Voting closed at 7 p.m. (1700 GMT). The official result has to be announced within five days but there will likely be an indication of the outcome on Tuesday.

Zimbabwe’s electoral commission said voter turnout had averaged 75 percent, higher than in the last vote in 2013.

Zimbabweans are also electing 210 members of parliament and more than 9,000 councillors.

The election winner faces the task of putting Zimbabwe back on track after 37 years of Mugabe rule tainted by corruption, mismanagement and diplomatic isolation that caused a crisis in a country that once had one of Africa’s most promising economies.

A credible vote is essential if Zimbabwe is to exit painful sanctions and secure the donor funding and investment needed to stem chronic cash shortages.

Chamisa said the Zimbabwe Electoral Commission (ZEC) was impeding voting in urban areas where he enjoys strong support but gave no evidence to back the claim.

“The people’s will being negated & undetermined due to these deliberate and unnecessary delays,” he said in a tweet. The ZEC was not immediately available to comment. It has denied Chamisa’s previous allegations of bias.

Reuters spoke to several international observers who said the voting process had been slow at some stations but it did not appear to them to be intentional.

Chamisa said his Movement for Democratic Change (MDC) would win if there was no “ballot mischief”, making it likely he will challenge the outcome if Mnangagwa prevails. A contested result is likely to lead to street protests and possible violence.

EU chief observer Elmar Brok said many voters, particularly young women, left voting queues in frustration at long delays. The EU has not yet concluded how to judge the vote, he said.

Dozens of people were killed ahead of a runoff in 2008 between Mugabe and MDC-founder Morgan Tsvangirai, who died of cancer in February.

Mugabe, 94, led the war for independence and since 1980 has dominated the country’s politics. But since he stepped down under military pressure in November he has lived in obscurity.

He emerged on the eve of the election to announce he would vote for the opposition, surprising Mnangagwa who accused him of striking a deal with Chamisa.

Mugabe made no comment to reporters as he cast his ballot around lunchtime accompanied by his wife, Grace. A huge crowd gathered outside, some cheering, many booing.

Mnangagwa, a former intelligence chief, denied Mugabe’s claim that the vote would not be free since it was being run by a “military government”.

“I can assure you that this country is enjoying democratic space which has never been experienced before,” Mnangagwa told public television after voting.

Mnangagwa, of the Zimbabwe African National Union-Patriotic Front (ZANU–PF), has been president since the military ousted Mugabe in a bloodless coup.

Elections under Mugabe were often marred by intimidation, rigging and violence but the consensus is the build-up to this vote has been better than before, although Chamisa complained about a flawed voters’ roll and opaque ballot paper printing.

“Victory is certain, the people have spoken,” Chamisa said after casting his ballot in Harare as a cheering crowd chanted: “President! President! The president is here!”

“I have no doubt that by end of day today we should be very clear as to an emphatic voice for change.”

“ZANU-PF is the only party that I have voted for,” said Elizabeth Kamhunga, 67, after casting her vote in Harare. “We may have made some mistakes but I think President Mnangagwa is the only person who has the interests of Zimbabwe at heart.”

The European Union, the United States and the Commonwealth have sent observers.

“However the public’s faith in the secrecy of the ballot is essential for the credibility of the process. We urge the authorities to do everything possible to ensure the secrecy of today’s vote.”

Mnangagwa has made a big effort to win over foreign opinion; hosting Western ambassadors, courting investors and patching up relations with white commercial farmers who were violently evicted from their farms under Mugabe. 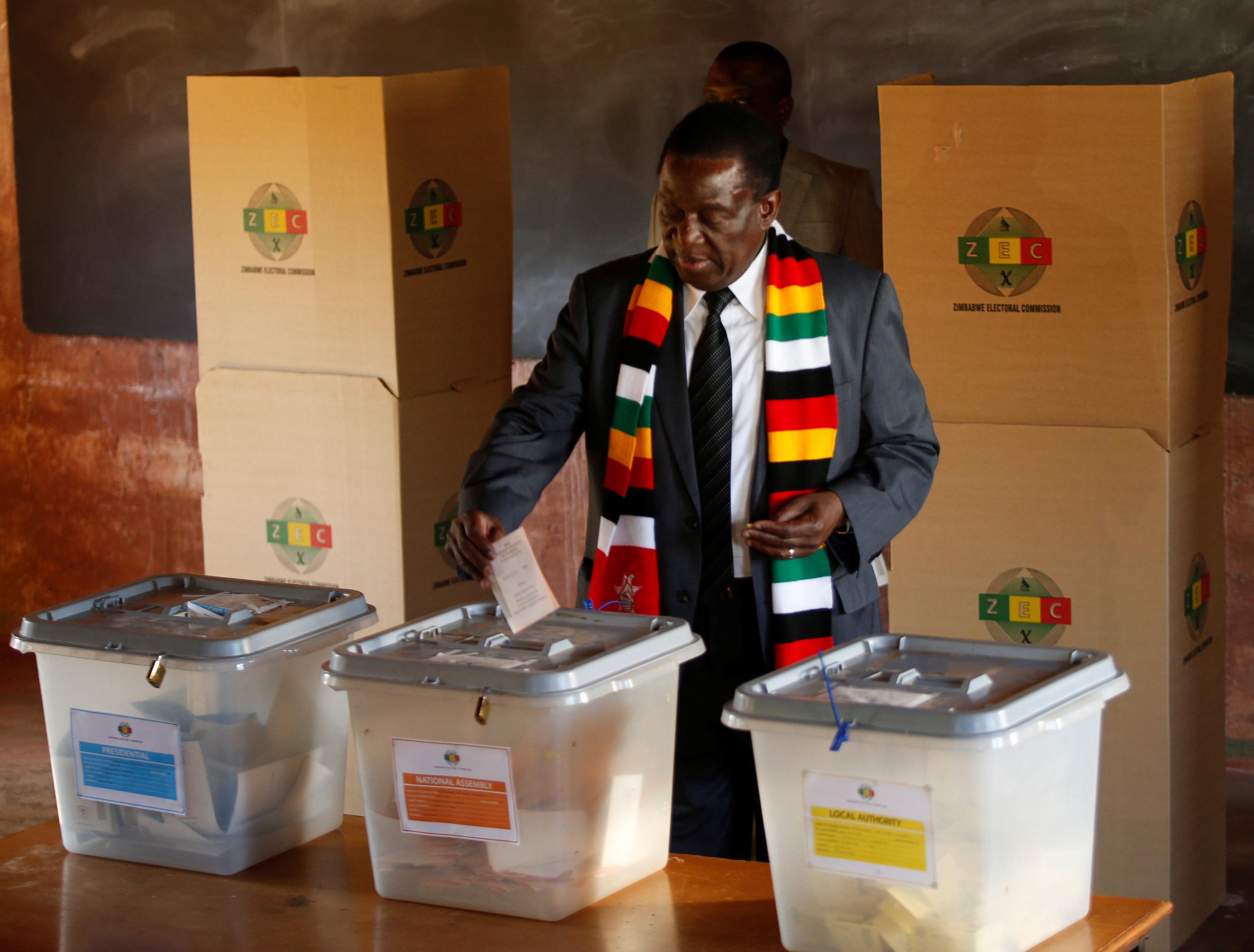