Home » Politics » An Insurgency From Inside the Oval Office

WASHINGTON — President Trump’s relentless effort to overturn the result of the election that he lost has become the most serious stress test of American democracy in generations, led not by outside revolutionaries intent on bringing down the system but by the very leader charged with defending it.

In the 220 years since a defeated John Adams turned over the White House to his rival, firmly establishing the peaceful transfer of power as a bedrock principle, no sitting president who lost an election has tried to hang onto power by rejecting the Electoral College and subverting the will of the voters — until now. It is a scenario at once utterly unthinkable and yet feared since the beginning of Mr. Trump’s tenure.

The president has gone well beyond simply venting his grievances or creating a face-saving narrative to explain away a loss, as advisers privately suggested he was doing in the days after the Nov. 3 vote, but instead has pressed the boundaries of tradition, propriety and the law to find any way he can to cling to office beyond his term that expires in two weeks. That he is almost certain to fail does not mitigate the damage he is doing to democracy by undermining public faith in the electoral system.

His hourlong telephone call over the weekend with Georgia’s chief election official, Brad Raffensperger, pressuring him to “find” enough votes to overturn President-elect Joseph R. Biden Jr.’s victory in that state only brought into stark relief what Mr. Trump has been doing for weeks. He has called the Republican governors of Georgia and Arizona to get them to intervene. He has summoned Michigan’s Republican legislature leaders to the White House to pressure them to change their state’s results. He called the Republican speaker of the Pennsylvania House twice to do the same.

He and his staff have floated the idea of delaying Mr. Biden’s inauguration, which is set in stone by the Constitution, and he met with a former adviser urging him to declare martial law. His erratic behavior has so alarmed the military that he might try to use force to stay in the White House that every living former defense secretary — including two he appointed himself — issued a warning against the armed forces becoming involved.

And he has encouraged Vice President Mike Pence and congressional allies to do anything they can to block the final formal declaration of Mr. Biden’s victory when Congress meets on Wednesday, seeking to turn what has historically been a ceremonial moment into a last-ditch showdown over the election. The idea has disturbed even many senior Republicans and it is guaranteed to fail, much to the president’s frustration.

“The ‘Surrender Caucus’ within the Republican Party will go down in infamy as weak and ineffective ‘guardians’ of our Nation, who were willing to accept the certification of fraudulent presidential numbers!” Mr. Trump wrote on Twitter on Monday, quickly drawing a warning label from the social media firm.

He denied subverting democracy, posting a quote he attributed to Senator Ron Johnson of Wisconsin, one of his Republican allies: “We are not acting to thwart the Democratic process, we are acting to protect it.”

But Mr. Trump’s efforts ring familiar to many who have studied authoritarian regimes in countries around the world, like those run by President Vladimir V. Putin in Russia and Prime Minister Viktor Orban in Hungary.

“Trump’s attempt to overturn the election, and his pressure tactics to that end with Brad Raffensperger, the Georgia secretary of state, are an example of how authoritarianism works in the 21st century,” said Ruth Ben-Ghiat, author of “Strongmen: From Mussolini to the Present.” “Today’s leaders come in through elections and then manipulate elections to stay in office — until they get enough power to force the hand of legislative bodies to keep them there indefinitely, as Putin and Orban have done.” 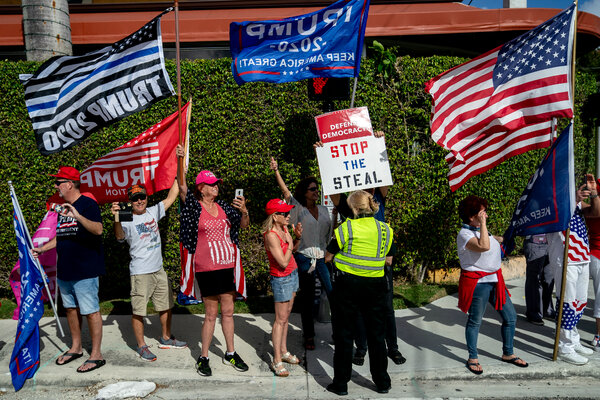 The call with Mr. Raffensperger, which was recorded and released to the news media after Mr. Trump tweeted a false version of the conversation, provided a breathtaking case study of how far the president is willing to go to to preserve power. He ran through one unfounded conspiracy theory after another, pushed Mr. Raffensperger to “find 11,780 votes” to flip the election outcome, appealing to him as a Republican to show loyalty and implicitly threatening criminal charges if he refused.

The call was unseemly enough that even some of the president’s allies distanced themselves. “One of the things, I think, that everyone has said is that this call was not a helpful call,” Senator Marsha Blackburn of Tennessee, one of the Republicans pushing to reject Biden electors from swing states, conceded on Fox News.

Mr. Trump’s claims that the election was somehow stolen from him have gained no traction in any of the dozens of courts that he and his allies have petitioned, including the Supreme Court, with three justices he appointed. Republican election officials in swing states like Mr. Raffensperger have rejected his claims as false. Even Mr. Trump’s own attorney general, William P. Barr, said he saw no widespread fraud that would have changed the outcome of the election. But that has not deterred the president.

Mr. Trump’s fidelity to the concept of American democracy has long been debated. He has expressed admiration for strongmen like Mr. Putin, Mr. Orban, President Xi Jinping of China and President Recep Tayyip Erdogan of Turkey, evincing envy of their ability to act decisively without the checks of a democratic government. He has asserted at various points that the Constitution “allows me to do whatever I want” with the special counsel investigating him and that his “authority is total” to order states to follow his wishes.

He has sought to turn government agencies into instruments of political power, pressuring the Justice Department to prosecute his enemies and go easy on his friends. He has made expansive use of executive orders that courts at times ruled went too far. He was impeached by the House in 2019 for abuse of power for pressuring Ukraine to help him sully Mr. Biden’s reputation and then acquitted by the Senate last year.

From his earliest days in his campaign, critics suggested that he harbored autocratic tendencies that raised questions about whether he would eventually subvert democracy or seek to stay in power even if he lost, questions that grew loud enough that he felt compelled to respond. “There is nobody less of a fascist than Donald Trump,” he insisted in 2016.

Even so, Mr. Trump did little to disabuse those fears in subsequent years, suggesting last summer that the November election be postponed and refusing to commit to a peaceful transfer of power if he lost. Even now, just two weeks before the end of his term, Mr. Trump has left doubt about how he will leave the White House when Mr. Biden is inaugurated.

What he could try to do to stop it remains unclear since he seems out of options. But he is not yet willing to acknowledge the reality of his situation and follow John Adams’s example.