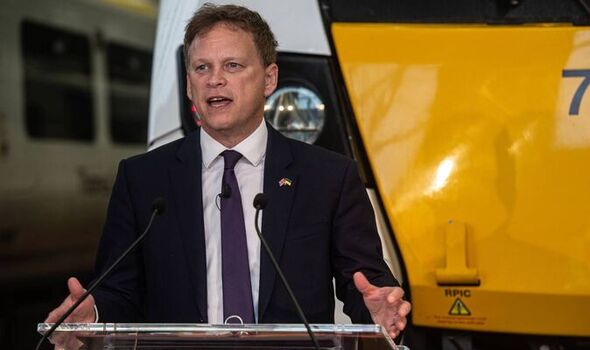 Workers, families and businesses already struggling with the cost of living crisis, will be hamstrung next week as transport strikes are set to grind swathes of the UK to a halt.

The Daily Express understands up to 20,000 strikers are Network Rail employees and half of Britain’s rail lines will close on June 21, 23 and 25 – while none of the protestors will be paid when striking.

Now Transport Secretary Grant Shapps has issued a dire warning to the National Union of Rail, Maritime and Transport Workers (RMT) that their planned 40,000-strong walkout could “endanger the jobs of thousands of workers”.

The Cabinet minister issued a direct plea to those embarking on three days of walkouts next week, stating they “risk striking yourselves out of a job”.

He also stated that the Government plans to introduce legislation to enable the use of agency workers on the railways during industrial action “if the strike drags on”.

Transport for London (TfL) has also “strongly encouraged” people not to travel on London Underground on June 21 because of a 24-hour walkout by the RMT and Unite.

There are fears of more co-ordinated strikes designed to attack the Government, with more strikes on June 26 by the Associated Society of Locomotive Engineers and Firemen (Aslef) workers, specifically on Hull trains.

Aslef tram drivers plan to strike on June 28-29 and July 13-14 on Croydon Tramlink; with further rail strikes possible in July if balloted by the 18,000 unhappy members of the Transport Salaried Staffs’ Association (TSSA).

And Unite has also warned of industrial action to prevent cuts to London’s bus network. They are calling for guarantees that jobs will not be lost and take-home pay will not fall.

The RMT dispute has flared over pay, jobs and conditions. They want pay rises for workers that recognise the RPI rate of inflation, which is currently 11.1 per cent, and a guarantee of no compulsory redundancies.

The union has claimed that Network Rail plans to cut jobs and reduce spending with an impact on safety.

But Network Rail and the Government have accused the union of an unwillingness to modernise work practices.

On Thursday in a speech at a train depot in north London, Mr Shapps said the strikes would be “damaging” for railway workers and their families.

He stressed: “Unions claim this strike is about a pay freeze. This is wrong. We are not imposing a pay freeze now Covid is in the past.

“So, I say to the workforce: ‘Your union bosses have driven you to the verge of a national strike under false pretences. And rather than protect your jobs, they are threatening your jobs’.

“These strikes are not only a bid to derail reforms critical to the network’s future and designed to inflict damage at the worst possible time – they are also an incredible act of self-harm by the union leadership.”

He said the railway was “in a fight” as it was competing against remote working with internet platforms such as Zoom and Teams, and other forms of public and private transport.

Mr Shapps added: “We’re going to endanger the jobs of thousands of rail workers. The last thing the railway should be doing right now.

“It’s alienating its passengers and the freight customers with long and damaging strikes.”

Mr Shapps denied his comments were “a threat”, describing them as a “statement of the reality” and urged unions to “join us on that journey” to reform the network.

UKHospitality chief executive Kate Nicholls warned of the millions of pounds that the strikes will cost the already struggling hospitality industry.

She said: “For a devastated hospitality industry beginning its tentative post-pandemic recovery, the planned strike action couldn’t come at a worse time and might deliver a fatal financial blow to those businesses already struggling to survive.”

And Dee Corsi, chief operating officer of the New West End Company group in London, said of the strikes: “This will be a particular blow for retail and hospitality businesses that are already struggling with rising costs and staffing shortages.”

Hitting back, RMT general secretary Mick Lynch said: “The threats made by Grant Shapps today to railway workers’ livelihoods and their right to strike are disgraceful and will make RMT members even more fiercely determined to win this dispute.

“Instead of playing to the gallery for his own personal political ambitions, Mr Shapps needs to act like a pragmatic Transport Secretary who is willing to meet with the union and help us reach a negotiated settlement.”

TSSA leader Manuel Cortes waded in by blasting the Government for resorting to “bully boy tactics”, fuming: “What we heard from the Transport Secretary looked very much like threats and intimidation of workers instead of constructive dialogue.

“Bully boy tactics will not wash with our union when the truth is our members are fighting for their jobs, pay and for a safe railway fit for the future.”

Mr Shapps claimed the Government has a “range of options” to respond to industrial action, such as enabling the use of agency workers.

He said: “If the strike drags on … then transferrable skills, sometimes called agency working, will be something which will become available as well in this particular dispute.”

Tim Shoveller, chief negotiator for Network Rail, said talks will continue with the RMT as bosses “work very creatively to try and find ways of reducing the cost of running the railway”.

The strokes come as new figures show that revenue from train fares was nearly half of normal levels in the year to the end of March.

Rail regulator the Office of Rail and Road said the industry generated £5.9 billion over the 12-month period but that was 54 per cent of the £11.0 billion from two years ago.